Kenyans once again exhibited their supremacy in athletics today after dominating in this year’s Kigali International Peace marathon.

It was a jubilant afternoon for Kenyans at Amahoro National Stadium in the capital Kigali, as the country’s national flags were raised with national anthem sung, after Kenyans won with medals the first and second stages of the 13th edition of peace tournament.

Sponsored by telecom company – MTN Rwanda, the Kigali International Peace Marathon, was special for having the First Ladies Jeannette Kagame of Rwanda and her counterpart Margaret Kenyatta of Kenya among other participants.

5800 people from 35 countries registered for the Peace Marathon, including 500 Kenyans and thousands of Rwandans.

With her jersey numbered 3172 Mrs Kagame and her Kenyan counterpart Mrs Kenyatta who wore 1019, the First Ladies ran in the ‘Run for fun’ category (9.6 km) instead of the 7km that were planned initially.
They were given medals by two young runners who are expected to be the future athletes.

In the non-competitive Run for Peace, some mothers did not shy away but brought their babies with them and the people with disabilities were also present.
“This event is so special and has a very important meaning. It is the only marathon in the world that promotes peace both in Rwanda and across borders,” said Julienne Uwacu, Minister of Sports and Culture. 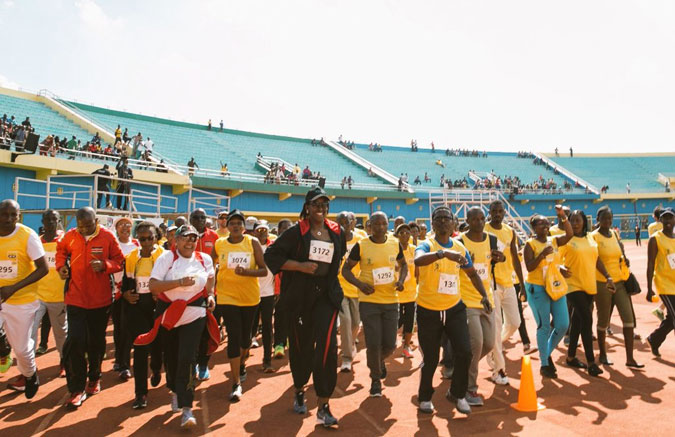 Two competitive categories, the full marathon – 42 km and the half marathon – 21 km tested Rwandan athletes’ ability and showed they still have a lot to learn from their Kenyan counterparts.
Kenyans took all the awards in full marathon 42km– men and women’s category, despite the sponsor trying to award as many participants as possible.

In the full marathon – 42km, Gilbert Chumba took an early lead and looked comfortable throughout the race. He won it after clocking 2hrs, 19mins and 49 secs.
His compatriots Edwin Kiyeng came second while James Tallaam who holds last year’s gold medal came third.

Apart from the top three who were awarded with gold and two silver medals and cash prize – between Rwf 2M-1.4M, MTN Rwanda also awarded the 4th,5th and 6th with cash ranging from Rwf 1.2 M to Rwf 800,000. Kenyans claimed all the money.

In the women’s category – full marathon, it was also the same scenario. Beatrice Rutto was the woman of the day – using 2 hours 46mins and 38 secs, followed by Pamela Checkovich and Sarah Jerop Legat on 2nd and 3rd position respectively. 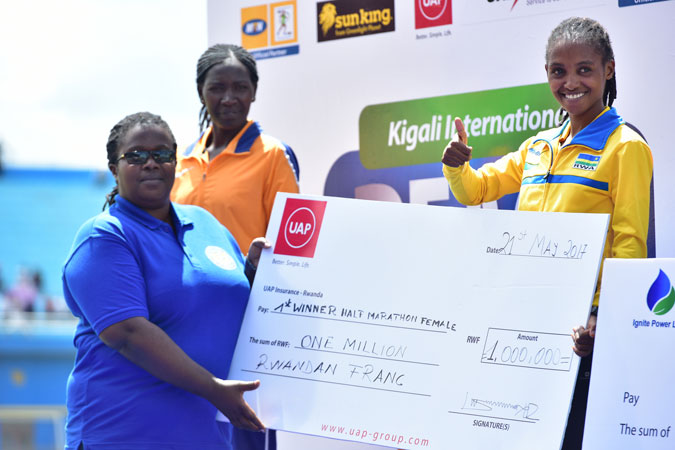 Rwandans came in to compete in the half marathon with Nyirarukundo Salome claiming the top position after clocking 1hr 15mins, 28secs.

Rwandan women went ahead to also claim the 4th and 6th position.

The First Lady of Rwanda Jeannette Kagame was grateful to have her Kenyan counterpart run alongside with her, in the event that was themed “Run for our Heroes” in a bid to honor the lives lost during the struggle to liberate the country, 23 years ago. 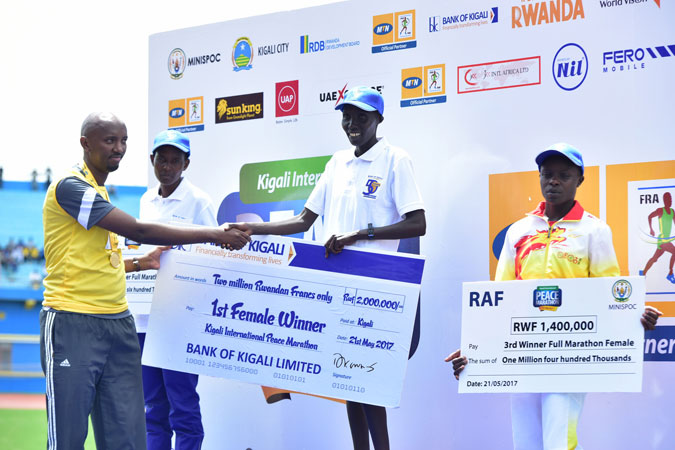 The peace marathon takes place within the Country’s Kwibuka 23 (that marks 23 years since the 1994 genocide against Tutsi) period that spans between April 7 to July 3 ahead of the country’s Liberation Day on July 4.

“Grateful to @FirstLadyKenya Mrs Margaret Kenyatta for joining us for the @KigaliMarathon #RunForPeace,” Mrs Kagame tweeted after awarding winners of the Men’s Full Marathon.

Kenyans have dominated all the past 12 editions of the peace marathon including last year where they scooped all the top 6 competitive positions in both the 42 km and 21 km races.

“We would like officials in charge to always take time to prepare the athletes. You cannot expect athletes to win while you took just one week to train them,” commented Salome Nyirarukundo on behalf of her compatriots.

“Rwandan athletes are able. There is no point to feel that Kenyans are better than us.”