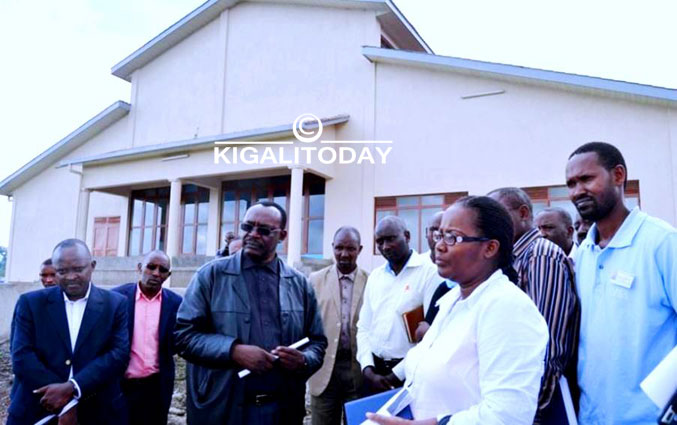 (In black jacket) François Kanimba the Minister of Trade, Industry and East African Affairs (Mineacom) during a guided tour at an Irish Potato processing plant that may soon be sold off

Several public owned factories are reportedly operating under losses and Rwanda government is considering selling them off to private investors.

On Tuesday, François Kanimba the Minister of Trade, Industry and East African Affairs (Mineacom) was summoned to Parliament to explain why most of these factories were struggling with losses.

He admitted to lawmakers that some of the plants have failed to live to the initial expectations although government keeps injecting in funds.

The Minister said that the best option is to privatize factories that are struggling.

“Some factories like Mukamira and Nyagatare Savannah milk plant have been privatized and others are already on the waiting list,” Kanimba said.

They process milk from milk collection centres which are also struggling.

The country has 106 milk collection centres of which only 48 are partially operational, 42 have various problems and perform below average capacity while 16 are idle.

Meanwhile, the minsiter was also tasked to explain why Kinazi cassava factory in Ruhango district and Nyabihu potato factory recently built in Nyabihu district have poor production and farmers are not benefiting from the investments.

Kanimba said mismanagement, poor infrastructure and lack of connection to international markets have resulted to partial failure of these factories.

For Kinazi cassava factory and Nyabihu potato plant, Kanimba said they failed to negotiate prices with farmers that later refused to provide factories with raw material.

“Farmers now prefer the high price offers on the open market instead of selling to the factory. This is creating problems and we need to find alternative solutions,” Kanimba explained.

Lawmakers said that the issue of low productivity needs to be addressed immediately.

“Abandoning these projects compromises the initial objective of government and that is not a solution because factories were meant to benefit farmers. We should do our best to make them fully operational,” said MP Pelagie Mukantagazwa.

Long Wait Over, Rwandans in Belgium to Meet President Kagame