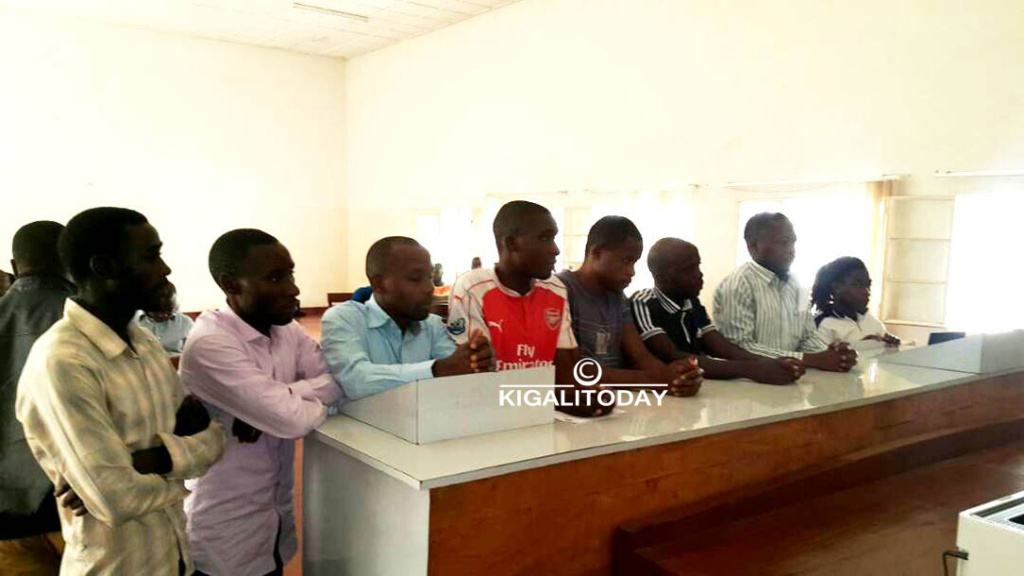 The Nine Suspects appearing before the judge in Nyarugenge intermediate court

Nine Rwandans all co-accused of forming an armed group and conspiring to overthrow the government are seeking bail and or provisional remand.

On Wednesday the suspects including 8 men and a woman appeared before Nyarugenge intermediate court for pre-detention trial.

According to prosecution, the suspects worked directly with FDU Inkingi-an unregistered political group to recruit people into the rebel movement; some recruits had already managed to cross into DRCongo.

The suspects who including a university graduate were arrested on different dates from Kigali City and Rusizi district. They sought court release on grounds that they were illegally arrested.

In their argument, suspects said they were arrested without arrest warrants and search warrants, but taken straight to police and kept for days without seeing a lawyer.

The trial was halted for 20 minutes after defense lawyers Gatera Gashabana and Antoinette Mukamusoni told court that they had not met with their clients and needed to brief them.

“We need to talk to our clients because some of them were not given search and arrest warrants…The suspects should also be given a right to communicate and know where they are,” Gatera said.

After the break, the trial resumed and prosecution was allowed to resume their argument. The prosecutor said there was no mistake in the arrest of all suspects.

“There are missing warrants for some suspects who were arrested in action. It is the case of Papias Ndayishimiye and three other co-accused who had all paperwork going to Congo to join the rebels,” the prosecutor said.

“This circumstance doesn’t provide that one is given an arrest warrant; even a citizen can arrest a suspect if there is evidence,” The prosecutor said.

The prosecutor presented audio and written documentation showing the rebel group networking and recruitment. It is alleged that there was unspecified amount of money that was distributed to transport and facilitate the recruits to Congo.

All the plans were made in discrete meetings in bars and phone message chats. 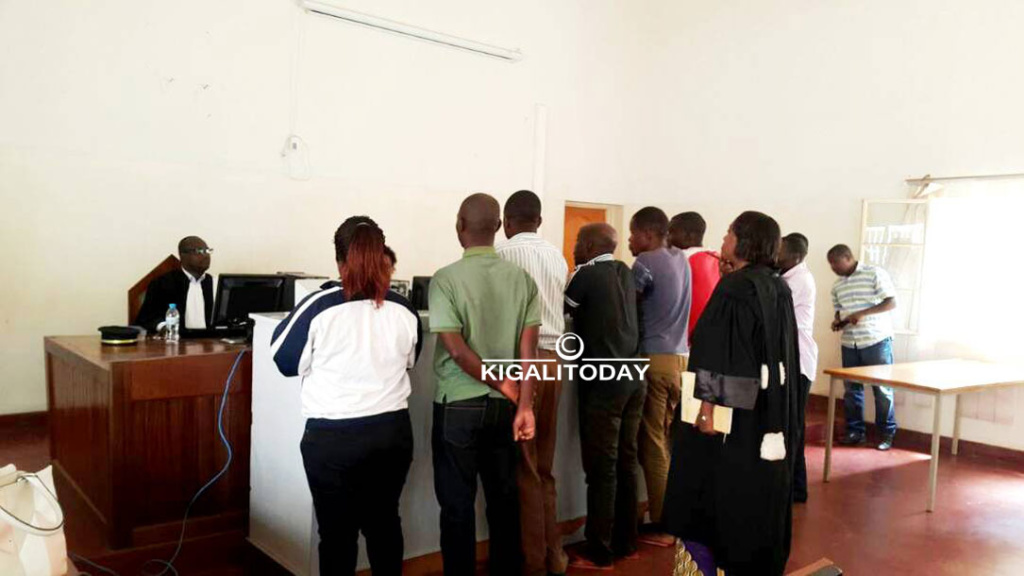 ‘When you join us, you become rich’

Suspect Papias Ndayishimiye a graduate from University of Kabgayi spilled detailed evidence of how he was recruited, the process of getting travel documents but pleaded not guilty to charges of forming a rebel group.

Ndayishimiye was arrested on his way to DR Congo on September 6th after one of the co-accused allegedly told him that if he joins the rebel group through FDU-Inkingi, he would obtain good money.

He joined  and was introduced to Boniface Twagirimana, the unregistered party vice president.

“It took me five months before agreeing to the idea. I was later introduced to members of FDU-Inkingi including Boniface Twagirimana with whom I met at a bar in Muhanga district in 2015,” he said.

“In 2016 they asked me to join other party members to visit Victoire Ingabire. We met in Nyabugogo and boarded a car to the prison.”

Ndayishimiye said he became very active since 2017 after attending the party’s meetings twice. From one of the meetings, they agreed to form a self-help group with Rwf 1000 contribution.

In another testimony, Ndayishimiye said he started trying to reach FDLR since August 27th, when he met an FDU member Fabien Twagirayezu who told him, “never to be scared to meet the coalition of eight parties including FDU.”

“Twagirayezu sent me money – Rwf14,000 to process my travel documents – which I obtained. He asked me never to disclose it while in DRC and promised that more details would be communicated later.”

Time to cross to FDLR, testified Ndayishimiye, was set for September 1st.

“I was given $55 transport fees and was given all the travel details, the route I had to take, a new Sim Card and way to exchange money to get local currency.” Ndayishimiye was arrested while crossing to DRC.

Another suspect Janvier Twagirayezu – a former teacher in DRC and Graduate at former Kigali Institute of Science and Technology (KIST) is accused of having information on plans of FDU but concealed it from security organs.

He said he was recruited by his former student, “He(former student) came and talked to me. When I went out he followed me and told me of FDU’s two plans; register and participate in 2018 parliamentary election or attack Rwanda via Tanzania.”

Twagirayezu was also introduced to other members of FDU and then later to Victoire Ingabire at prison.

Boniface Twagirimana, the FDU policy and strategy commissioner said that his political organisation didn’t work to recruit anyone and to be a member requires registration and to recruit requires preparation.

The judge asked Twagirimana to address the allegation he was funding trips of some of FDU members to meet FDLR.

He said, “any Rwandan travelling is none of my business. They have their rights to travel and my party cannot be liable on that,” he said.

Hearing in this case will resume on September 21st.