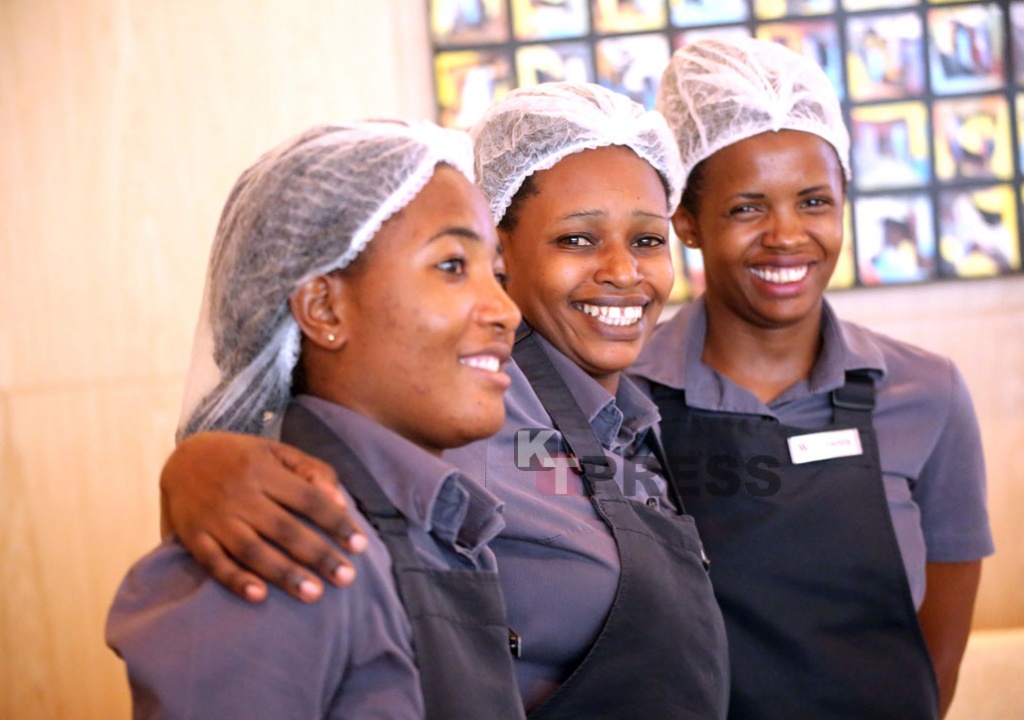 It is a busy Tuesday afternoon in Kigali as several guests check-in at Marriott Hotel.

While in the Hotel lobby, hotel staffs help guests to waiting shuttles after days of stay at the Hotel.

“It is a busy day,” says Aline Niyongira a 27- year-old hotel staff.  She is assigned to the housekeeping department. For her, getting hired by Marriott hotel 2 years ago seemed like a miracle.

“I still can’t believe how I ended up here,” she told KT Press.

Niyongira’s journey to one of the World’s biggest hotel brands is strange.

It all began in 2015 when Niyongira was called by a friend from her village in Rwamagana district to attend a small meeting organised by local leaders.

At the meeting, several women were briefed of an opportunity for skills development by Women for Women International – Rwanda chapter.

The organisation was mobilising vulnerable women across the country.

After several trainings on skills; 26 women including Niyongira qualified and attracted attention from Marriott Hotel.

The hotel, as part of its corporate social responsibility, has a flagship project to support vulnerable members of the community.

It was through this that Marriott partnered with Women for Women to select the best talents in different fields.

26 women beneficiaries of the program ended up landing jobs at the hotel – with an average monthly salary of about Rwf250, 000.

Himisa Wibabara, another lucky woman employed at Marriott in the stewards department, told KT Press a miraculous journey of how she won her interview.

“I was a villager. When we started trainings in Kayonza district in 2015, we were told that there was a hotel that wanted to hire staff. We all got shocked how vulnerable people like us would attract attention from such a big hotel,” she told KT Press.

At the time, she said, more than 200 women turned up for screening but not even 30 were needed.

“At first I was scared. But later a colleague told me to come and try my best. We went and the screening started. It lasted for days and I finally was selected,” Wibabara says.

But a tough journey had just started. The interview was a challenging experience. 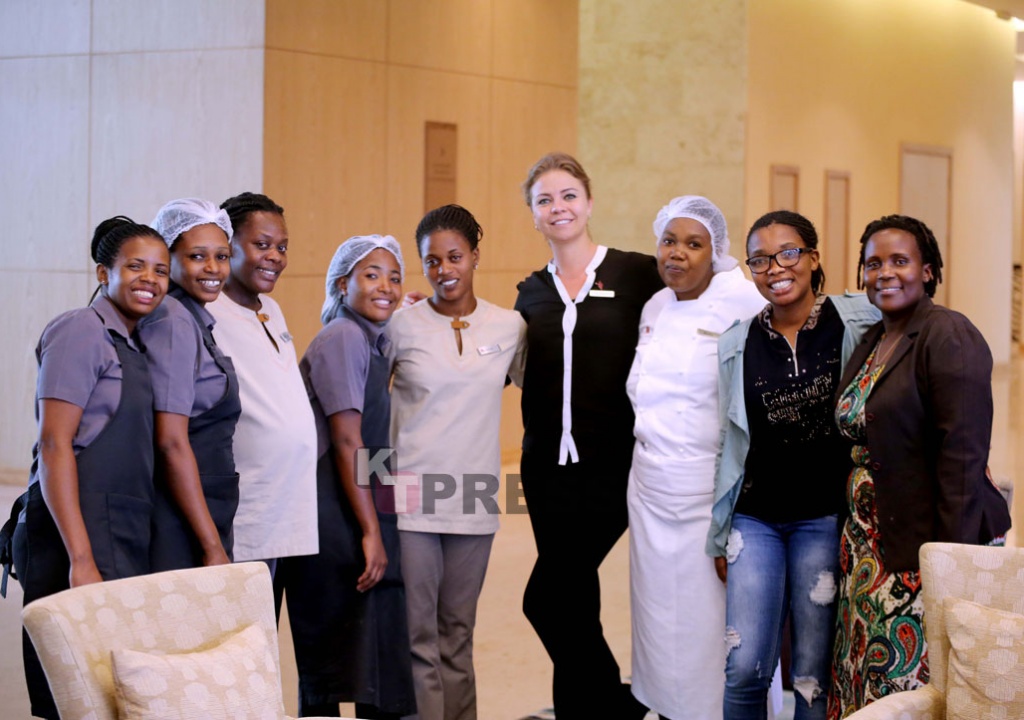 Aline Niyongira (in specs) poses with her colleagues.

When Wibabara 30, and her colleagues turned up for an interview at Marriott, they were tasked to do many things including dressing an executive bed in less than 5 minutes.

“I personally had never seen such a bed. Dressing it was a dilemma. It was one of the toughest experiences in my life,” Wibarara says amidst laughter adding, “But I made it. And I am now an expert.”

Similarly Albertine Uwera – from Ruhango district in Southern Rwanda also faced the same test. Before then, she was just a casual farmer tilling her garden for survival.

But after she enrolled for skills development training in her village, she later qualified for interviews at Marriott.

“My first day here is a lifetime experience. But working here has taught me that in life, everything is possible,” says Uwera who is employed in the Stewards department.

By press time, KT Press had not managed to meet all 26 women employed at Marriott because most of them were working in night shift. But 9 of them, who spoke, have ambitious projects.

José Umulisa, through her monthly salary has managed to enrol her 4 children into good schools, but that’s not all.

“I have already started a big project to build a Rwf40m house in the next 3 years,” Umulisa told KT Press. She has been saving a minimum Rwf50, 000 every month.

“Through these savings and a bank loan, I will complete this house before end of 2020,” she said. 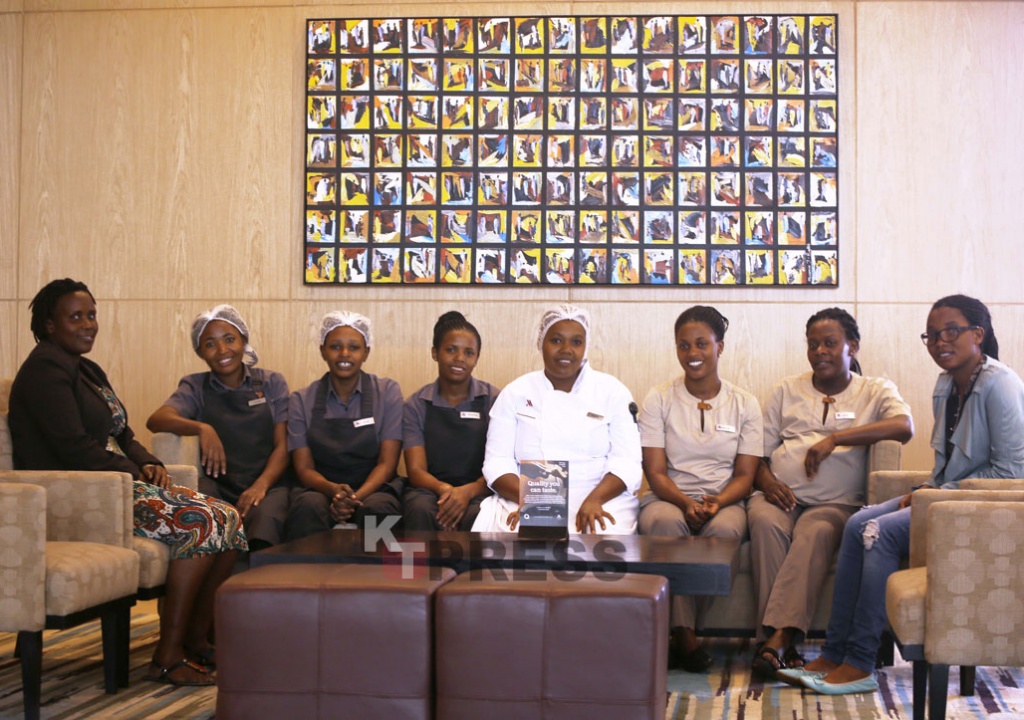 When Marriott was interviewing candidates, they also included graduates from universities but these women emerged among the best.

According to Yulia Bogdanova – Human Resource Director at Marriott Hotel, these women have become one of the best performing members of staff.

“We established a class for them to learn basic communication skills and have been the best performers,” Bogdanova told KT Press.

The 26 women employed at Marriott are part of about 20,000 more vulnerable women supported by Women for Women International-Rwanda chapter in collaboration with its partners.

Meanwhile, these women are attached to different departments such as Housekeeping, Culinary; Kitchen and Steward department, among others.

Activities supporting women in Rwanda and other countries are fully funded by the Bloomberg Philanthropies – a charitable arm of the Bloomberg founder and American Billionaire Michael R. Bloomberg.

Through Bloomberg funding, Women for Women International – Rwanda chapter was meant to empower 20,000 vulnerable women in its 4- year program (2013-2017).

One of its flagship projects; the ‘Women’s Opportunity Centre’ in Kayonza district, Eastern Rwanda, is the ‘crown jewel’ of the program.

Antoinette Uwimana – the Country Director for Women for Women International in Rwanda says through partners such as Workforce Development Authority (WDA), Imbuto Foundation, Marriott Hotel; Gender and Family Promotion Ministry and others, the program has facilitated women to graduate with enough skills to help them compete on the job market.