The reigning Tour du Rwanda and La Tropicale Amissa Bongo champion Joseph Areruya sealed another successive title as he won the first edition of the Tour de l’Espoir on Sunday in Yaounde, Cameroon.

The last stage of the Tour de l’Espoir from Akono to Yaounde was won by Eritrean  Eritrean Mulueberhan Henok after clocking one hour, fifty minutes and forty-four seconds (1h50 ’44), coming ahead of Morocco’s Chokri El Mehdi who finished second.

Algerian Bengayou Abdelraouf and Rwandan Areruya came three seconds behind the winner to finish in third and fourth positions respectively.

Team Rwanda riders went into the final round of the Tour de l’Espoir with a tactical approach that would grant Areruya the winning edge to retain the yellow jersey and overall win the race.

At the 13.1km mark, riders Morocco’s El Houcaine Sabbahi led the peloton that involved 36 riders with the Rwandese inclusive.

At the 23.3km, the trio of Louis Visser (South Africa), Kaka Bamba (Ivory Coast) andGrégory blusher-lamin (Mauritius) broke away from the peloton as they took control of the race and the Rwandan riders remained intact in the group.

At the 28km mark, Ethipioan Danay Gebrehans ran away from the peloton to try and get reach of the leading trio which had put a 55-second gap.

Then at 49km mark, the duo of Ilyas Rabihi (Morocco) and Kaka Bamba (Ivory Coast) led another attack with South African Joshua Francis going against them before the peloton engaged in a brisk pace en route to the finish line at the 58km mark.

Heading into the final circuit of the race at the 61km mark, Team Rwanda led a 15-riders peloton as they battled to protect the yellow jersey candidate Areruya Joseph.

From the 65km mark, Team Rwanda riders led by Areruya rode harder and maintain their edge in the peloton to cross the finish line in a peloton which involved the Eritrean stage winner Mulubrhan, Morocco’s Chokri, Algerian Bengayou, Areruya and Maye Alexander from Mauritius.

Other Rwandans who finished in the top ten of the final stage include; Munyaneza Didier who managed a seventh-place finish in 01h50’52 while Hakiruwizeye Samuel finished ninth coming twenty-four seconds behind the winner.

Areruya won the tour de l’Espoir with a total timing of 10h27’34, beating his closest rival Chokri El Mehdi  from Morocco by two minutes and forty seconds (2’40) and third-placed El Kouraji Mohcine from Algeria came three minutes and six seconds (03’06) behind him.

Team Rwanda also had two riders finishing in the top ten of the general classification with Ukiniwabo Jean Paul finishing fourth in 10h32’17 and Munyaneza Didier in nith slot with 10h35’44.

The Tour de l’Espoir victory earned Areruya an automatic participation at this year’s Tour de l’Avenir in France, a race regarded as the U23 version of the famous Tour de France.

In the third stage, he improved to second position in the 101.8km third stage race held in Yaounde to claim the yellow jersey which he defended as he finished fourth on the last stage of the tour to register the general classification victory.

Tour de l’Espoir whuch was one of the six U23 UCI calendar events on the UCI calendar counting for the U23 Nations Cup in 2018, was organized by Vivendi Sports, under the aegis of the Cameroon Cycling Federation and the International Cycling Union.

The continental cycling attention will now shift its attention to the UCI African Continental Road Championship slated for February 13-18 in Rwanda. 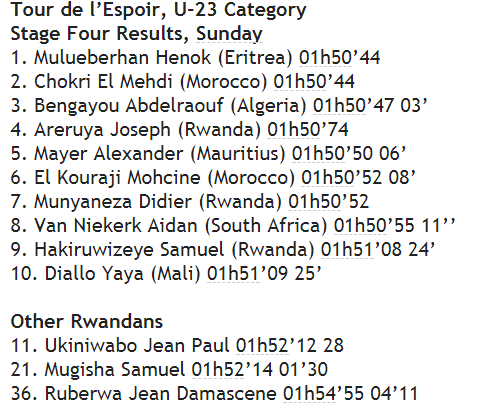 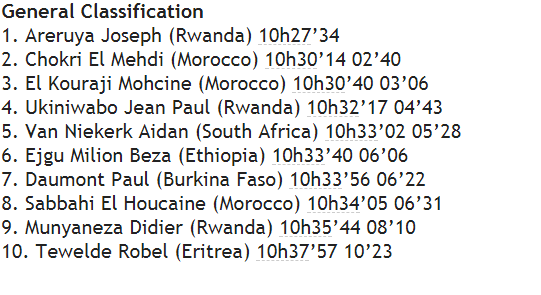