For some years now, the growing high-end Hotels in Rwanda have complained about ‘poor quality’ of local fruits and vegetables – pushing them to import the products.

This will be history in the near future. Rwanda and Israel have jointly ventured into a horticulture project that experts in this field say has reached maturity stage to serve high demand for products on the market.

KT Press toured the Rwanda-Israel Horticulture Center of Excellence at Mulindi, in the outskirts of the capital Kigali.

The project could be Rwanda’s solution to increased horticulture exports and probably revamp farmers’ welfare.

When KT Press visited the site, Pamela Ruzigana, the project production manager and Diane Uwanyirigira – a vegetable specialist, were busy supervising over 30 people who were harvesting varieties of vegetables.

technology system, you are welcomed by multiple vegetable colors. 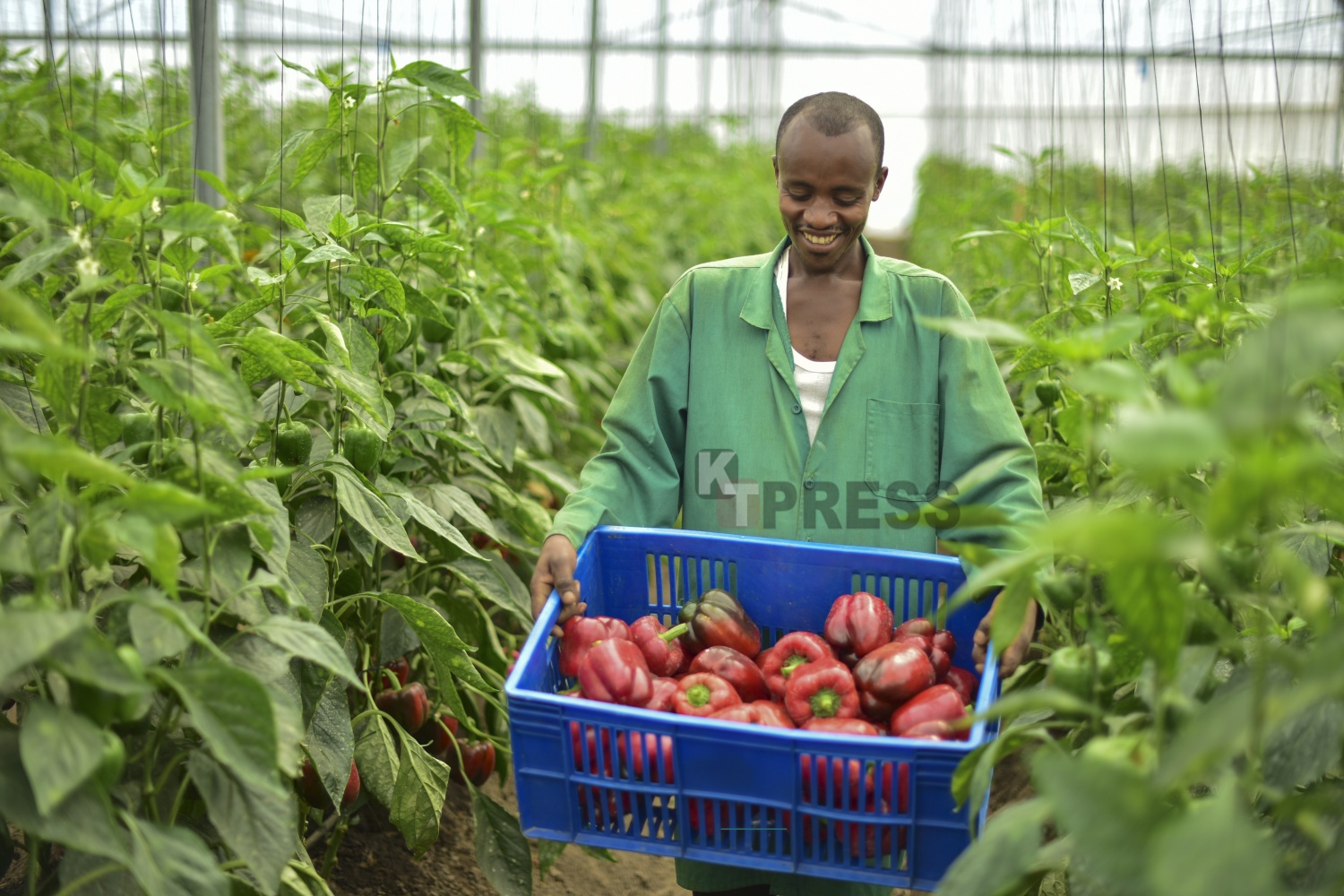 These are some of the main fruits and vegetables grown at the centre.

The Rwanda-Israel Centre of excellence, as it is known, was established as a pilot project to built capacity for Rwandan farmers to boost the Agriculture sector especially in Horticulture (Vegetables and fruits).

According to Ruzigana, “The Minister was impressed and brought the idea back home which is finally what you see here today,” she said.

By adopting new technologies from Israel, added Ruzigana, the centre helps farmers through learning by doing a system where they come to the center get trainings on different technical skills on vegetable and fruits production.

What is the process?

According to Diane Uwanyirigira, the centre selects Hybrid Seeds and put them in the nursery for an average period of 25-35 days depending on the type of crops.

During the process, she told KT Press, the land is well prepared for planting and compost is added to the prepared bed Pipes for the irrigation system.

Later on, drops of water are directly applied. At this stage, she says, “Seedlings are planted respecting the spacing Crop management activities,” she explained. 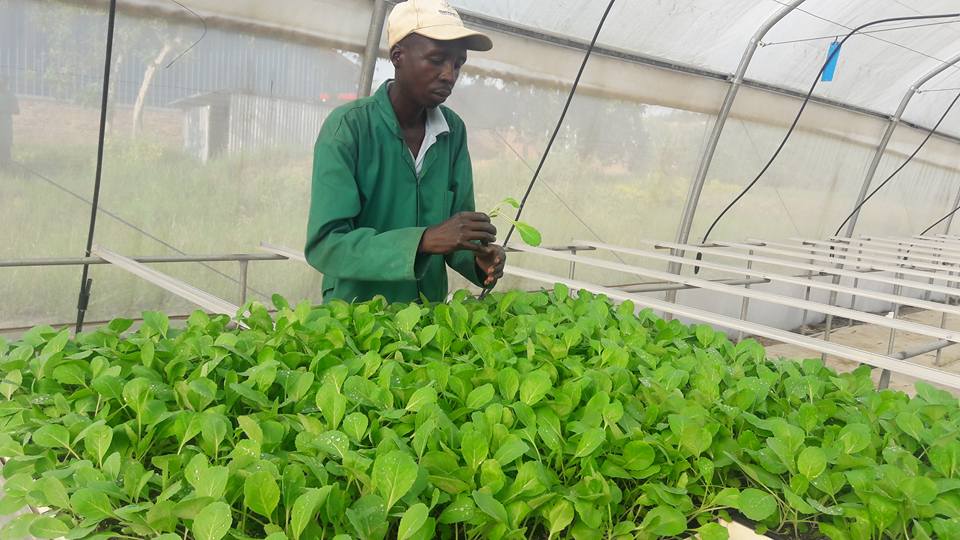 Cabbage nursingDuring this process, Uwanyirigira told KT Press, Chemical application for prevention of diseases and insects that would damage Irrigation and application of water with fertilizers are avoided. “At this rate, the protocol is observed for proper growth of our crops,” says Uwanyirigira.

In every green house, says Uwanyirigira, every seedling is planted at a space of about 40-60 cms. “But we prefer 40cms in order to maximize land,” she told KT Press.

According to Uwanyirigira, to support the crops to grow massively, “We use wires and clips what we call trellising give direction to the climbing crops.”

Several vegetables of different varieties are grown at the center. They include lettuces, Cabbage, Onion, Tomato, Hot pepper, sweet peppers, Eggplant, among others.

One of the samples KT Press witnessed is tomatoes and pepper.

“For tomatoes in the greenhouse, we have two types; small indeterminate that continuously grow for a period of 8 months. The other tomatoes are called cherry tomatoes that are used as fruits and in salads purposely for fresh consumption,” Uwanyirigira said as she ushered our reporters around a huge green house.

For big indeterminate or tomatoes that continuously grow, are purposely for consumption and making tomato sauce, said Uwanyirigira.

Meanwhile, sweet pepper or known in French as ‘Poivron’ differs in terms of colors. The ones grown at the centre are red, yellow and green pepper.

“In our community, we are accustomed to only 1green pepper on our dish but decoration brings in colors,” Uwanyirigira said.

According to Uwanyirigira, a single indeterminate tomato tree can grow up to 500kgs in a period of 8 months.

One of the greed houses at the center has a size of 36cms long by 9cms wide.

The recent report by Food and Agriculture Organisation(FAO) indicates that more than 40% of the food losses and food waste in developing countries occur at post-harvest and processing levels.

According to 2014 Commodity System Assessment Methodology survey in Rwanda between 20% to 40% of all food losses are caused by poor handling of produce.

The report proved also that farmers are often reliant on extension services whose capacity in postharvest handling and marketing are inadequate.

According to Uwangirigira whose daily job monitors the efficient growth of crops at the centre, “By harvesting there are materials needed to be used to avoid any damage to the fruits. Marketing also is part of what we do since vegetables are very sensitive and cannot be stored for long.”

For Pamela Ruzigana, “All our produce at the center has potential market. For instance, we have recently generated over Rwf8 million in the last two months,” she said.

At the moment, Ruzigana told KT Press that the center receives several local farmers who come to learn the best practices and technology application behind effective production.

Despite this massive production made out the latest horticulture business, one would curiously need to know the cost of having the final fruit or vegetable on the market.

According to Uwanyirigira, a 9 by 36cms greenhouse costs around Rwf5 million including irrigation system installed. This technology can serve a farmer in hundreds of seasons. A greenhouse can last up to 20 years. However, the greenhouse from Israel were reported to last for even up to 50 years. 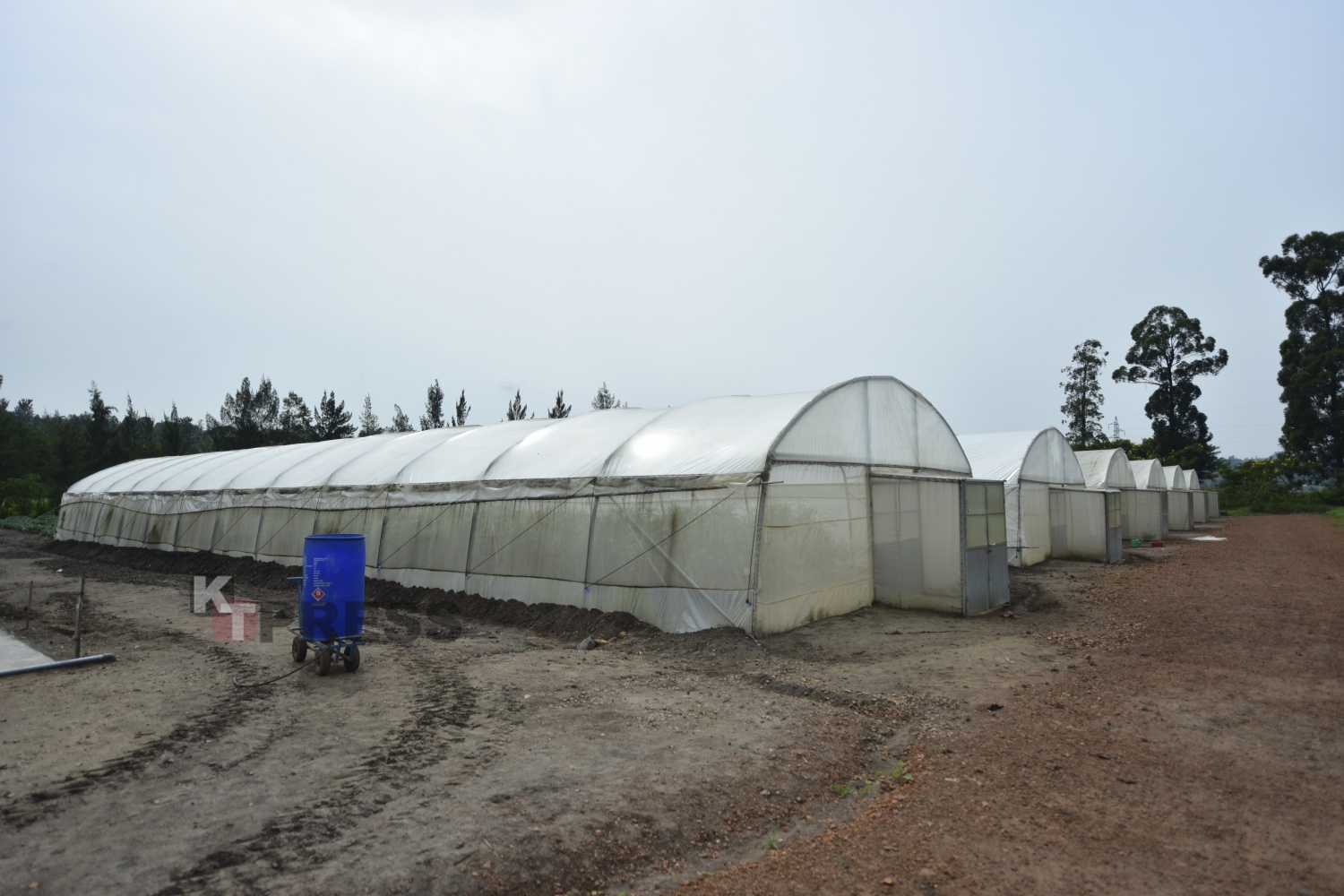 In Rwanda, Fruits and vegetables play a significant role in export of horticultural products which has attracted more investors in the sector.

According to National Agriculture Export Board (NAEB) companies exporting horticulture products in the country grew from two in 2014 to five companies in 2017 – exporting their produce to markets in Europe and United Arab Emirates (UAE).

According to the fiscal Year 2016/17, export of fruits and vegetables were 25.1 metric tons worth$17 million up from 20 metric tons which had generated $8 million in the previous year.