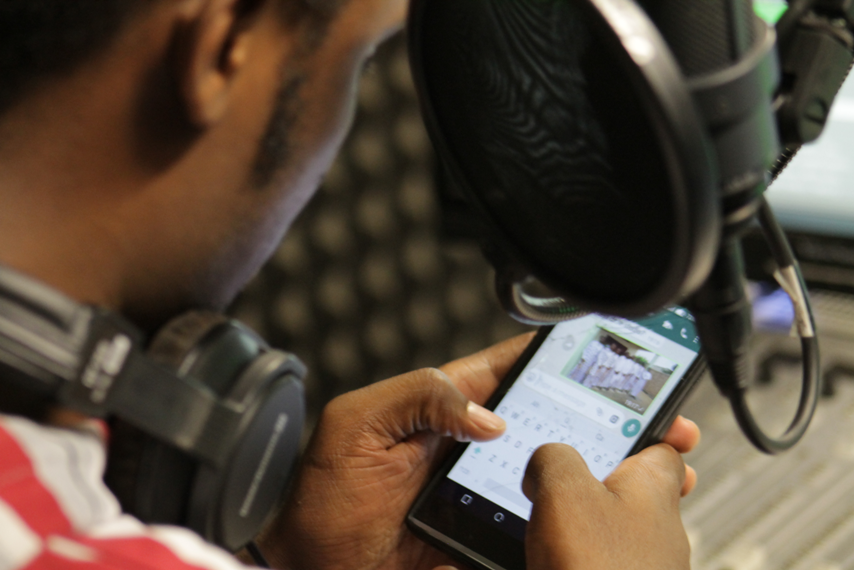 Journalist Gerald Mbabazi in the studio of Magic FM

Charite Ingabire, a resident of Masizi Center, Musange Sector in Nyamagabe District cannot watch television in her area unless she makes a trip to a neighbor who has solar power.

Ingabire is one of thousands of residents who have no access to electricity which has isolated them from knowing what is happening inside the country despite availability of decoders.

“Whenever I want to watch TV, it means I visit my neighbors who have managed to buy Mobisol solar panels and TV sets,” Ingabire said.

Only five out of approximately 1,000 households at Masizi trading center have TV sets using StarTimes decorders to watch TV with a good signal but cannot access other service providers like Go TV and AzamTV.

On the other side of the country, Martin Rusimbi, resident of Kamembe in Rusizi District in Western Province has owned a TV set for over 10 years.

“Before migrating from analogue to digital the images were of poor quality and sometimes we could miss the signal,” Rusimbi said.

For three years now he says he watches all televisions in Rwanda without any interference and the images are very good.

While before residents of Rusizi were dominantly watching televisions from the neighboring DRC, Rusimbi says he currently watches local televisions including RTV, Flash TV, Contact TV and TV1 and all with quality images.

Other residents like Ildephonse Niyitegeka of Karama Sector, Nyagatare District in Eastern Province uses a free community TV (Tunga TV decoder,) to watch only RTV while others who have other decoders watch all local televisions without any problem.

According to the current status, most of the stations rent digital transmission rights from the national public broadcaster (RBA) after Rwanda acquired new transmission technology where at least eight TV channels are supported by one transmitter, unlike on analog when one transmitter could only support one TV station.

Rwanda will next week host the African Union of Broadcasting’s General Assembly that is expected to discuss among others, the extent to which African countries have managed to implement digital migration.

Despite failing to meet earlier ITU deadlines, by 2015, Rwanda, Kenya, Tanzania were among the 10 African countries that have managed to make a 100 percent migration transition from analog to digital broadcasting.

For Kenya, the process was also setback after reports of set-top box dealers misleading consumers into buying Pay TV decoders even when they asked for free-to-air set-top boxes.

Rwanda shut off the last of its analog signals in March 2014 switching to Digital Video Broadcasting Terrestrial (DVB-T) with plans to upgrade to DVB-T2 in the future.

Over 192,000 decoders are in supply, and only four companies – Tele 10, Sorim, TransAfrica and Star Africa Media are licensed to import decoders in Rwanda.

“For Rwanda we also have the situation that the upgraded digital TV system DVB-T2 is ready, but most people still have the old DVB-T1 decoders” said one technical operator.

Over 18 TV stations have since 2015 expressed interest in acquiring broadcasting licenses and the numbers of digital TV services has also grown with new entrants like Azam TV.

Meanwhile, some TV service providers still have an objection to make as of regulations that would speed up access to digital images across the country.

With over 10,000 clients, Pamela Nkurunziza, the GoTV Customer Care Representative says despite successful digital migration Pay TV suppliers are challenged with reaching more rural communities even with affordable prices for decoders and subscription.

For example at GoTV a decoder costs Rwf37500 with a free one month subscription and a full bouquet of 47 channels worth Rwf6700.

“Most of our clients like our digital images and want us to extend services countrywide but the lack of transmitters has limited our reach. We kept focus on Kigali,” Nkurunziza said.

Joseph Nyiringabo, the acting Spokesman at Rwanda Utility Regulatory Authority (RURA) says that the costs of transmitters are incurred by the service providers.

We only give the license and monitor coverage. Transmitters have to be provided by the service providers to enhance their coverage and business,” Nyiringabo said.

Rwanda-Israel Horticulture Deal to Cut Down on Imports