The reigning Tour du Rwanda and La Tropicale Amissa Bongo champion Joseph Areruya got control of the yellow jersey on the third stage of the Tour de l’Espoir which was won by Rwandan rider Samuel Mugisha on Saturday in Yaounde, Cameroon.

The Rwandan duo, Areruya and Mugisha rode 101.8lm, a 6-lap race across Cameroonian capital, Yaoundé to finish atop clocking a joint 02h28’40 with Mugisha landing the leading slot while Areruya was ranked second.

The Rwandans staged a good competitive race and their intent for a victory was witnessed earlier after riding 55km, they were in the leading pack chasing the yellow jersey.

After the 66km mark, Areruya left favourite Eritrean leader Natnael Mebrahtom as he took aim of the yellow jersey as Mugisha followed in closely.

At the 71km mark, it was all a clear victory for Rwanda Areruya and Mugisha maintained a one minute and twenty seconds ahead of their closest rivals.

At the 85km, they enhanced their reach by going one minute and fifty-five seconds ahead of the closest cyclists and with 4 km from the finish, there was no change as Areruya and Mugisha went together for a stage victory.

Both Mugisha and Areruya came two minutes and thirty-seven seconds ahead of Ethiopian Ejdu Milion Beza who finished in third place with 02h31’17 while another Rwandan Munyaneza Didier finished fourth in 02h31’24.

Ukiniwabo who finished second in the second stage of the race finished ninth, coming in two minutes and forty-seven seconds behind the Rwandan duo of Areruya and Mugisha.

Another Rwandan in the top ten of the general classification is Ukiniwabo Jean Paul with a total timing of 08h41’05 who is placed fifth, four minutes and eighteen seconds behind Areruya.

Should Areruya maintain the leading gap after tomorrow’s final leg, he will register a new cycling chapter of winning successive championships in a space of four months namely; the 2017 Tour du Rwanda held in November, La Tropicale Amissa Bongo in January 2018 and Tour de l’Espoir in February 2018.

The competition reserved for cyclist below the age of 23, organised by Vivendi with technical support for the International Cycling Union started on January 31 and will conclude on Sunday with cyclists riding 80.5km from Akono to Yaounde.

After Tour de l’Espoir, a new race on the UCI Africa Tour calendar, attention will shift to the UCI African Continental Road Championship slated for February 13-18 in Rwanda. 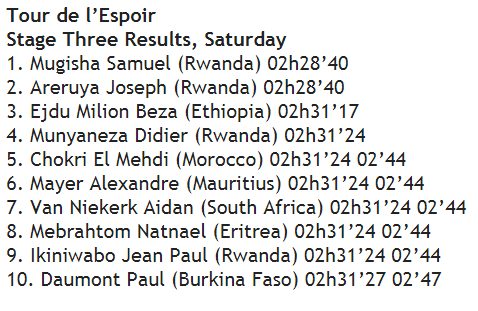 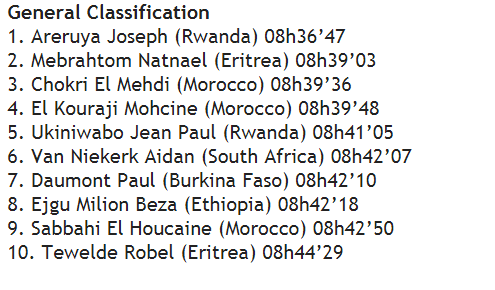