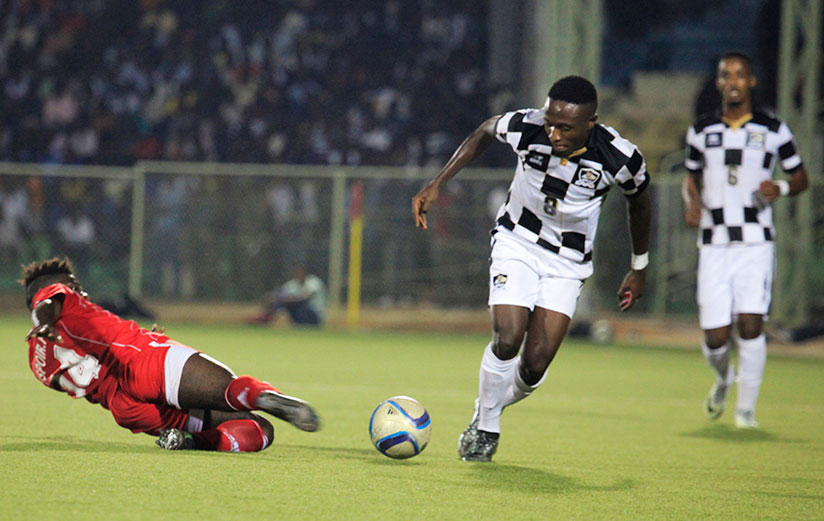 APR midfielder Djihad Bizimana seen in a past continental qualifier. He will be key as APR Fc takes on Malian side Djoliba this afternoon

Rwandan side APR Fc is ready to overturn the slim 0-1 first leg loss when they play visitors Djoliba Athletics Club de Bamako in the return leg of the first round of the CAF Confederation Cup on Saturday afternoon at Amahoro Stadium in Kigali City.

Djoliba won the first leg 1-0 courtesy of a lone goal scored by Cheikh Niang and the military side has vowed to do what it and secure at least a two-goal margin to proceed to the next round.

The aggregate winner after today’s game will play in the play-off round with the eventual winner sealing a place in the lucrative group stage.

APR head coach Ljubomir ‘Ljupko’ Petrovic said on Friday, “We were the better side in the first leg were we missed many chances. Djoliba had two chances, one was converted and they missed a penalty,”

“We will stick to the same playing style we had employed in Mali and our mission is to win the gameon Saturday. I am confident and I trust my players to do the job on Sunday. We must eliminate this team (Djoliba),” added the Serbian.

Meanwhile, Djoliba Coach Fanyeri Diarra said on Thursday, “APR Fc is a good team, they caused all sorts of problems in the first leg held at home but we managed to win. Our target is to extend our lead by scoring more goals,”

“However, we expect a tough game because APR Fc will be playing behind their home fans and we must avoid any mistakes if we are to progress to the next round which I am assured of. We shall play as a unit to ensure qualification. We have done the work necessary,” added Fanyeri.

Malian clubs have had disastrous 2018 CAF campaigns with three of the four eliminated in the preliminary rounds.

Djihad Bizimana and Issa Bigirimana are potential match winners for the Kigali military club having notched five goals between them in the previous round.

Djoliba reached the group stages of CAF Confederation Cup in 2012 while APR have never reached the stage since they made their debut in Africa’s biggest club competition in 1997.