Around 1980, an incident happened in Gasiza village of Nyundo cell in the current Nyabihu district. Thirty-eight years later, nobody ever imagined it would come back to haunt the region for generations.

The area was part of Rambura Catholic parish. The church owned huge chunks of land. At the time it was called Karago commune and it was the home area of the then sitting President Juvenal Habyarimana.

Details are sketchy, but it became a public secret in the area that the parish offered Habyarimana land. That land was located at the foot of the Nama hill where Rambura parish was established back in 1913. There was also a tea plantation and a small river.

Research conducted by KT Press Team found that this particular piece of land was given to Habyarimana’s father Jean Baptiste Ntibazirikana. He had worked for Catholic missionaries during his teen and part of the adult years.

Then in mid-1982, construction began on a large magnificent residential compound. It was clear immediately that the house was the upcountry presidential mansion.

Sources at the parish who agreed to speak to KT Press on condition of anonymity say the exact size of the land Habyarimana’s father obtained is visible on the area map kept at the diocese.

Under the Catholic arrangement, however, land granted remains the property of the church. The new presidential home was sitting on Vatican land.

“When we give someone a piece of land, it still remains our property,” explained a Catholic priest at Rumbura parish. 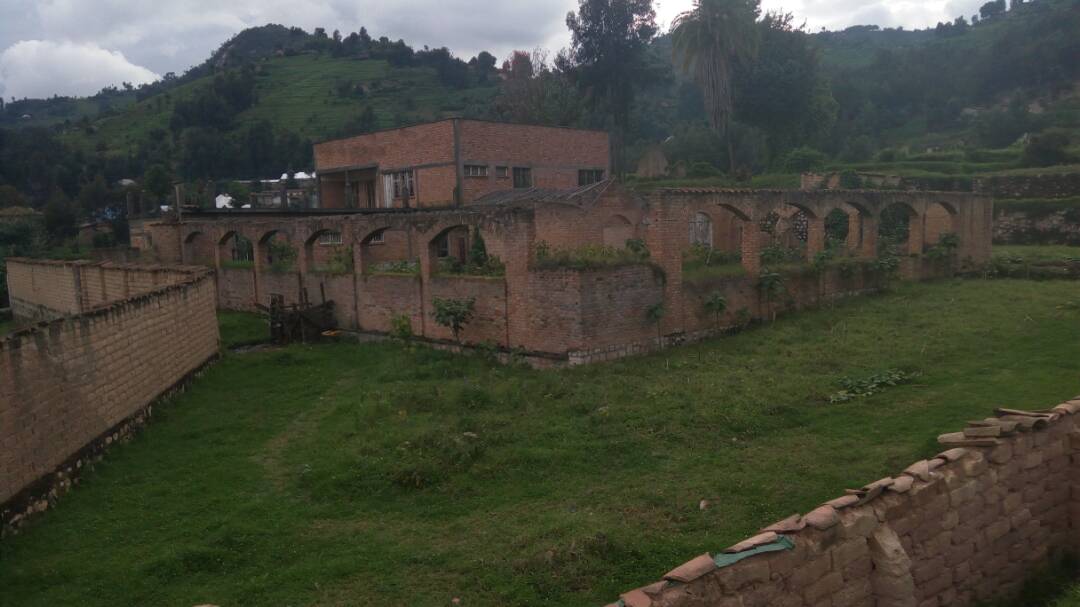 At the time Habyarimana’s new mansion was emerging, three priests were serving at Rambura parish; Father Antoine Habiyambere from Cyangugu, Father Niyitegeka Zaccharie Marie Antoine from Kibuye, and Father Kageyo Spiridion who was native of Rambura. The latter was the parish priest, also charged with safe custody of all parish land.

KT Press has established that Niyitegeka Zaccharie Marie Antoine was an architect by profession. He is also the one who oversaw the construction of Habyarimana’s home.

“Niyitegeka was always at the construction site while Kageyo was overall coordinator of the project,” recalls Jean Pierre Nsengiyumva, a resident of Gasiza, who was there as it all unfolded.

Neighbors of the former president told KT Press that the priests, most especially Kageyo had unfettered access to the first family’s home. And when it came to the president himself, the bond was unusually close.

“It was common knowledge around here that Kageyo was the Godfather to Habyarimana,” said Liberata Nyirabarihafi a resident of Gasiza, just some 500 meters from Habyarimana’s home.

Whenever Habyarimana visited from Kigali, he passed by the parish before heading to his home.

During all church sermons which Habyarimana attended at the parish, the president sat on a specially made chair besides the altar. He sat there with his wife Agathe Kanziga who is also from the area.

According to several testimonies provided by locals present at the time, and even from Habyarimana’s family in different trials at the International Criminal Tribunal for Rwanda (ICTR), nearly all Habyarimana’s children were baptized at this parish. There were also many other church events concerning the first family held here.

“The attachment between Habyarimana and the three priests went beyond church service,” said the priest we interviewed. “It is also reported that Kageyo had access to the president’s home even in the family’s absence.”

Such was the bond between Habyarimana and these three priests that some reports indicate they were the president’s friars.

Under the Catholic order, friars are priests who receive confessions of congregation members. They then pray for the absolution of the confessed sins.

“Kageyo was also usually called upon to settle marital disputes in Habyarimana’s home,” said the priest.

Years later, and it was the evening of April 6, 1994. Habyarimana’s plane is shot down as it descended on Kigali from Tanzania.

A Rwanda government official inquiry established that hardliners in Habyarimana’s government killed him because they felt betrayed when he signed a peace deal with the RPF rebels.

An independent inquiry by a French judge also corroborated these findings, adding with technical details which clearly showed the missile came from area controlled by the elite commando units of the government army and presidential guard.

Within hours, tens of thousands of government trained civilian militias called interahamwe began a kill frenzy across Rwanda. Roadblocks became the order of the day. Every village, except those under RPF control, became massacre sites for Tutsis.

On the early morning of April 7, presidential guards at the Habyarimana home in Rambura, mobilised militia gangs. They headed for the parish.

Nyirabarihafi, the president’s neighbor, recalls having seen some she identified as; Hamada, Bijoro and Migeri and Mitera. The last two names are also confirmed in the ICTR trials as having manned the roadblock set up late night on April 6 near the home of Protais Zigiranyirazo, the brother of the first lady. He was only known in Rwanda as “Mr Zed”.

At this same roadblock was also Jean Marie Vianney Zigiranyirazo, the son to Protais whom a witness at the trial in ICTR called a “brigand”. 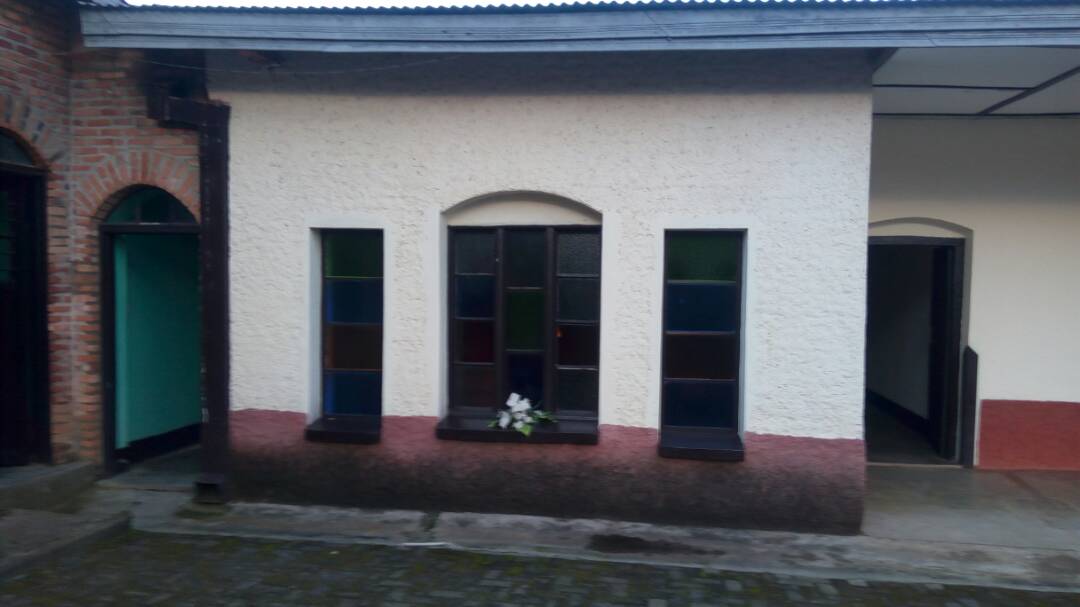 Father Kageyo and the Antoines were praying from this Chapel when killers invaded them. The first priest to come was shut dead and they went ahead to finish them all. Sebatashya Bernard who was an assistant burgomaster of Karago commune was also with the presidential guards.

Other witnesses say among the gang was also Emmanuel Twagirumukiza, a half-brother to Agathe Habyarimana, also from the same village.

“Let’s go cut the bush,” is how they chanted as they headed to the parish. This was metaphor used in different places for targeting Tutsis. Other victims would be killed such as those hiding Tutsi or had known links to Tutsis.

“From Gasiza, they walked up the road singing; ntawe ukanga burende (you can never scare the armored vehicle) and linked with another group at the junction of Rambura church,” narrates Nyirabarihafi.

Jean Baptiste Habyarimana was a night guard at the post office which is adjacent to the church. He told KT Press the president’s soldiers went straight to the residence where priests prayed every morning.

“They forced the gate open and entered the priests’ building. When one of the priest came out as their dog barked fiercely, they shot him dead,” said the gate keeper.

Inside, they shot two other priests. They left immediately. Jean Baptiste the guard says he and other parish staff found all the three priest friends of the president were the ones that had been killed. All were in their white robes.

For Kageyo, who had maintained the strongest bond with the president’s family, one of his right hands had been cut off. Jean Baptiste says Kageyo had a very expensive watch, which could have been what the soldiers wanted so they just removed the whole arm.

There are three young women killed at the church by the soldiers. We have since found out that they were related to one of the killed priests.

While the soldiers were completing their mission, the militias they had brought were looting.

An official from the commune, who Jean Baptiste the night guard identified only as Kalisa, ordered him and other parish employees to put the bodies of the killed priests in coffins. They were buried that same morning outside the parish compound.

So why were these priests targeted? Could it be that they knew too much about the president’s activities and could not be let to live?

Even before the 1994 genocide against Tutsi, mass killings of Tutsis had occurred in that same region as early as 1992. Available information shows the killings were “tests” of what would come in 1994.

Could it have been that the priests were aware of all these plans? How come just hours after president Habyarimana had been killed, his guards went into action in Gasiza? Who communicated to them that there were targets at the church who had to be eliminated?

The murder of the three priests was widely discussed in different ICTR trials especially that of Protais Zigiranyirazo.

As a defense witness in the Mr. Z trial, Dr Bararenganya spoke of a “special bond” between the president and Fr. Kageyo.

“He would always pass by the church to greet Kageyo,” he said.

Bararenganya knew it all because his wife was sister to the first lady Agathe Kanziga and his house was in the same plot with Habyarimana’s, both houses’ construction was overseen by the priests. He even owed the priests some money for construction services.

Another sister to Agatha Kanziga called Agnes Kampundu also confirmed that Kageyo was a very good friend to their father that he is the one who administered the last sacrament to the old man.

“Kageyo even used to visit us in Germany where I lived,” testified Kampundu at ICTR.

How come then, that the president’s family did nothing to protect the catholic priests? Another ICTR witness gave more details on the operation to kill the prelates.

“Mr. Ugonzila who was president of Interahamwe in the area told me when we met at the petrol station the same day that he had personally participated in the attack on the priests and that he had been contacted that very morning by the Presidential Guard and that the orders came from Kigali,” testified Michel Bagaragaza a witness from Rambura.

Mr Zed was controversially acquitted by the appeals chamber in 2009 on “technical grounds”. Judge Theodor Meron, whose conduct in several other cases has been questioned by his colleagues, is the one who issued the acquittal.

Unless First Lady Agathe Kanziga who lives in France, her half-brother Emmanuel Twagirumukiza and commander of presidential guard Maj. Protais Mpiranya, are found and prosecuted, the truth may never come out.

Mpiranya is one of a handful of most wanted fugitives. The United States has put a $5m bounty on his head. There have been unconfirmed reports that he is hiding in Zimbabwe. Others have claimed he died of HIV/Aids.

During our investigation, we uncovered cases of several people who were not affected despite being at the same location as the three priests. They were not killed.

We also found out that a French priest had visited the parish a week earlier.

If the killing of the priests had not been orchestrated, then how come presidential guards deployed in the parish forest did not intervene since the gunshots were very audible around the whole village?