The week-long tour ended with a stage eight race which saw riders covering 102.4km in Dakar. The stage was won by last year’s champion Algerian rider Mansouri Ismail in 2:36:53 while Uwizeyimana secured a second place finish.

Uwizeyimana’s performances in the tour earned him a fourth place finish on the general classification,coming behind the Namibian winner Craven Dan who clocked a total of 23:10:00. He was followed by Algerian Hamza Abderrahmane Medi and Dutch Nobel Rick in second and third positions.

In the team rankings, Team Rwanda was ranked third to come 4:24 behind the winners Sovac-Natura4Ever and German’s Team Embrace the World who secured the second slot. 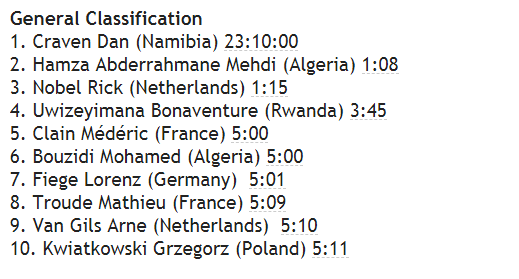