A Japanese company has discovered a new business opportunity to grow their rare flowers in Rwanda after a long search across the world.

The land in Kinigi partially fulfilled the required temperature for growing gentian flowers just as in other countries where the highly demanded flowers on global markets during valentines and Christmas seasons, has failed to grow.

Normally, gentian is grown in specific climatic conditions, temperatures (21 to 24°C), which is the reason why, when they reached Rwanda, Bloom Hills Rwanda Ltd had Kinigi in the volcanoes’ region as their first choice for trial tests.

However, they later on realized that the land had slightly lower temperatures lacked key ingredients that are required – the clay.

They later on discovered the Nyacyonga marshland which fulfills all conditions and carried out more tests.

The transfer of technology that can allow the plant to grow takes 20 years or 10 years – case of Chilie and New Zealand, but research on Nyacyonga marshland was the easiest because it took only three years to have a breakthrough.

The Japanese company has now started to get returns.

“The first shipment of gentian flowers to Europe is expected in two weeks’ time, and will be followed by another in November,” said Ambassador Takayuki Miyashita, the Japanese envoy to Rwanda.

Miyashita was speaking at the official launch of the export promotion ceremony for Made-in-Rwanda gentian held at the embassy residence in Nyarutarama – Gasabo district, May 14.

“Our hope is to develop agriculture technology transfer between the two countries to foster opportunities for young Japanese farmers to invest in Rwanda,” said Tsuyoshi Hatakeyama, the Managing Director of Mizuho Information and Research Institute, which is behind the research expertise and transfer of gentian growth in Rwanda. 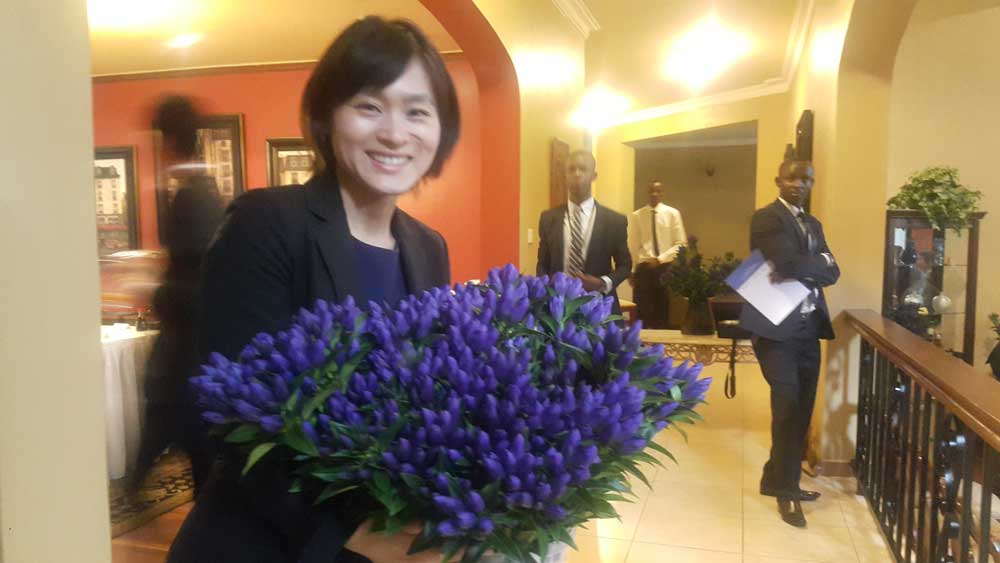 The gentian flower exporting project is a consortium of Japanese investments supported by the government of Rwanda.

“Prices for horticulture products are increasing and flowers are one of the made in Rwanda priority products that we see as having potential to contribute to the export volumes and diversifying the sector,” said Dr. Geraldine Mukeshimana.

The project of growing gentian flowers on large scale will employee over 100 Rwandan florists in Kinigi and Nyacyonga areas and also boost horticulture exports in the country to increase on export volumes.

While the gentian exports may look rosy, the challenges of cost of production, developing appropriate post-harvest technology, handling and research remain a major factor for Rwanda to consider in order to stay in business.

For example, the flowers need to be kept at less than 5C during export.

“We had to move from Kiningi to Nyacyongo where there are better conditions but we will need more IT data scientists to do the hardest work of research so we can develop other varieties by 2022,” Shungo Harada the Managing Director of Bloom Hills Rwanda Ltd.

Luckily, this comes at a time when under a Japanese government scholarship, 38 Rwandan data scientist have returned home after training in Japan – who are potentially hirable to pursue other gentian varieties in the country.

“Rwanda has an advantage of cheap labor compared to Chile and better policies which favor the success of this project, according to Harada, the Managing Director of Bloom Hills Rwanda Ltd.