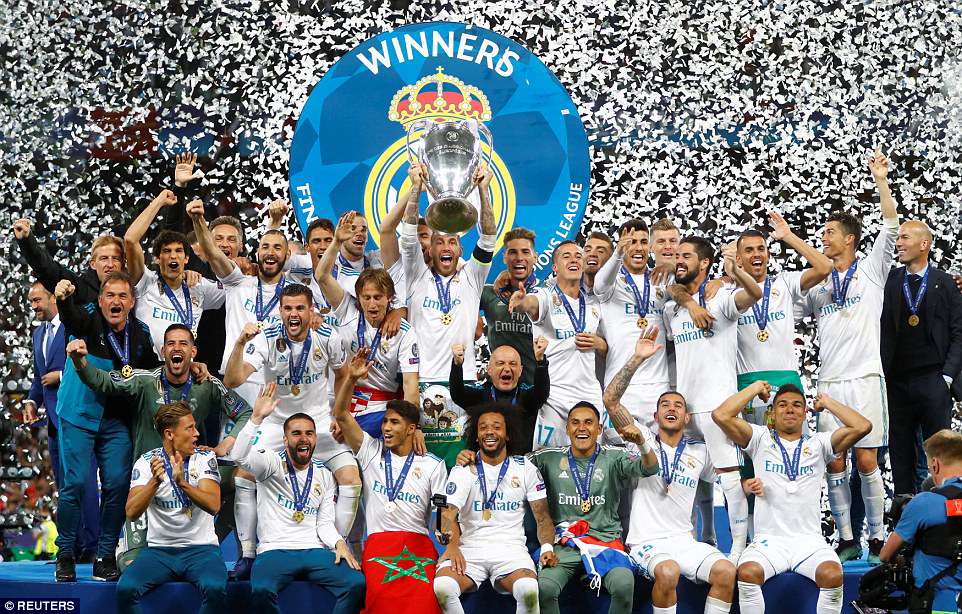 Real Madrid completed their third straight UEFA Champions League triumph with a 3-1 defeat of Liverpool in Kyiv on Saturday night to take the trophy for the third year running.

Gareth Bale scored twice off the bench as Real Madrid beat Liverpool 3-1 to become European champions for the 13th time.

Bale’s first was an ‘I-was-there’ goal, one to rival Zinédine Zidane, Mario Mandžukić and any other you care to name as the best in final history.

Marcelo’s cross from the left looked harmless enough, but the Welshman, 20 metres out, somehow contorted his body to hook the ball over his head with enough power that it fizzed past Loris Karius.

Quite the contrast to Madrid’s opener on 51 minutes, when Karius attempted to roll the ball out to a team-mate only for Benzema to stick out a hopeful leg which turned out to be a goalscoring interception.

Isco had been denied by the crossbar shortly prior to that, but Liverpool – creaking ever since the talismanic Mohamed Salah had been forced off with a shoulder problem in the first half – were quick to dust themselves down after going behind. Indeed they were level just four minutes later, Dejan Lovren’s towering header from a corner poked in by Sadio Mané at the back post.

That was as good as it got for the Reds, though, Bale almost single-handedly turning the tide back in Madrid’s direction after coming on just past the hour.

He struck his second with seven minutes left, a long-range shot that somehow squirted through Karius’s palms, and – after Mané had struck a post at the other end – almost added a third when clean through moments later. Madrid and Zidane had already wrapped up their very own hat-tricks by then, though.

This was not to be Salah’s night, with Real Madrid allowing Zinedine Zidane to become the first coach ever to win the Champions League three years in a row.

“With a team like this we can go far, but to win three of them, it’s something crazy,” Zidane said after the game.

Madrid are the first team to achieve that feat since Bayern Munich in 1976. This is their fourth title in five years, and their 13th overall.

Cristiano Ronaldo has now won five in his great career, but even he could not argue that this was Bale’s evening.

When asked if it was the best goal he had ever scored, Bale said: “I’d have to say it is, on the biggest stage in world football to score a goal like that is a dream come true.”