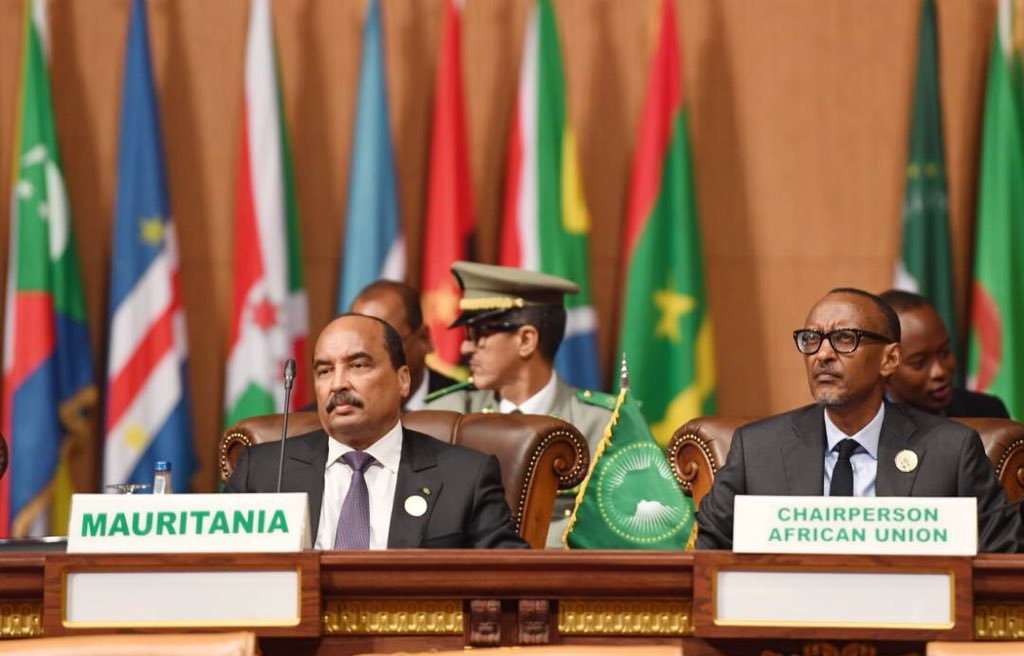 Presidents Kagame and Mohamed Ould Abdel Aziz during the Summit.

President Paul Kagame has condemned last month’s attacks on leaders in Zimbabwe and Ethiopia and paid tribute to the victims.

Addressing the 31st African Union Heads of State and Government Summit in Nouakchott, Mauritania on July 1, 2018, Kagame said the continental block stands with the countries affected by the attacks.

“As a Union, we stand with the peoples of Ethiopia and Zimbabwe in their pursuit of peaceful political change. We condemn the violent attacks and convey our condolences for the lives that have been lost,” Kagame said.

Last month, an explosive device was detonated at a Zanu-PF rally in White City Stadium in Bulawayo, Zimbabwe, and a deadly blast occurred at a rally in Addis Ababa, Ethiopia.

In the Zimbabwean attack, President Emmerson Mnangagwa, who had been addressing the crowds, escaped unharmed, but Vice President Kembo Mohadi was injured in the leg and taken to a local hospital.

At least 15 people were injured, three seriously, and some lost limbs in the explosion, according to Zimbabwe’s Health Minister David Parirenyatwa.

In Addis Ababa, the Ethiopian Health Minister announced two people died in the blast, while more than 150 people were injured.

On a positive note,however, President Kagame paid tribute to the tremendous progress in restoring peace and relations in Ethiopia, Eritrea and South Sudan.

“We are heartened by the strides made by the leadership of Eritrea and Ethiopia toward the normalisation of relations. You have the African Union’s unwavering support,”Kagame said.

“I also wish to acknowledge the encouraging steps in the South Sudan peace process, thanks to the mediation of the IGAD-mandated Heads of State. The African Union expects the parties to fully abide by the agreements.”

For President Kagame, “These positive developments remind us that partnership is the common thread in this Summit’s deliberations. Partnership amongst ourselves, first of all.” 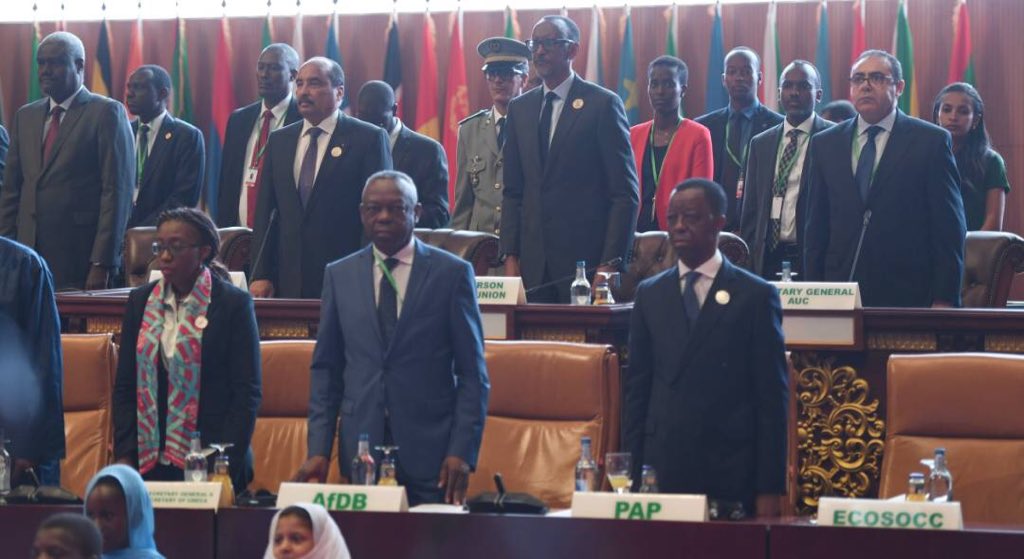 At the summit, leaders also discussed developments related to the African continental free trade area (CFTA), the African common position on negotiations of a new co-operation agreement between the African, Caribbean, and Pacific (ACP) developing countries, and the European Union (EU) post-2020, and the adoption of the 2019 African Union budget, among others.

The 2018 theme for the summit is “Winning the fight against corruption: A sustainable path to Africa’s transformation”.

On the budget to fund AU operations, President Kagame hailed the outstanding work of the Committee of 15 Finance Ministers, together with the Executive Council for coming up with the ‘most credible and transparent’ budget.

“The African Union has applied the “golden rule” and adopted the most credible and transparent budget in our history,” Kagame told the Summit.

“Through this process, the 2019 budget presented to the Assembly for consideration has even been reduced by 12 per cent, compared to 2018. At the same time, contributions to the Peace Fund have never been higher,” he added.

African leaders approved a 0.2% levy on eligible imports to raise at least $1.2billion annually to fund the African Union.

The President emphasised that “as a direct result of the growing confidence in our finances, the African Union is in a position to work toward a long-term partnership with the United Nations Security Council for stable funding for peacekeeping operations in Africa.”

For President Kagame, the agreement is well on its way to entering into force.

“From that point forward, Africa will necessarily engage with partners as a bloc. The renewal of Africa’s relationship with the European Union intervenes in this context,”he said.

“We note that His Excellency, President Julius Maada Bio of Sierra Leone, is participating in a Summit for the first time. We congratulate you and welcome you.

The spirit of solidarity binds us together as Africans.”

Kagame reminded the summit that: “The future we have been preparing for is already upon us. The institutional and financial reform of our Union has always been about the capacity to secure Africa’s interests and our dignity.

The business-as-usual approach cannot continue, and indeed, as we are seeing, significant changes are beginning to take hold.”