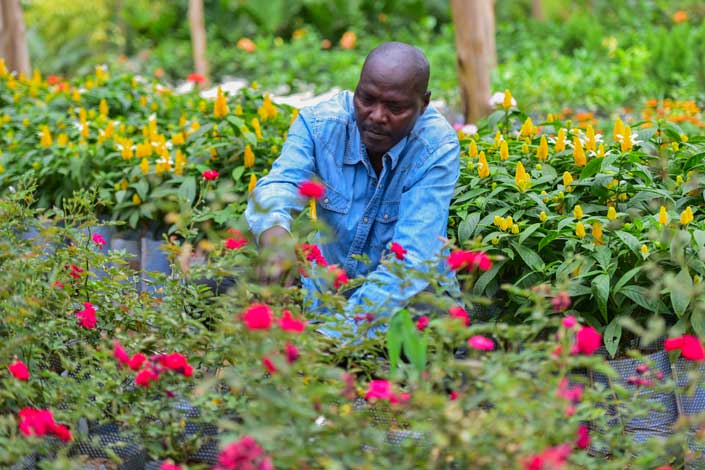 Laurent Mirasano in his Kigali plant nursery. flowers are selling like hot cakes

Four Rwandan floriculture companies have been nominated for the world largest floriculture international trade fair in The Netherlands.

International Floriculture Trade Fair (IFTF) will be held from November 7 through 9 in Vijhuizen City, Northern Netherlands.

It is organized by Union Fleurs, the international flower trade association and sponsored by Hortipoint publications in Netherlands.

It is an opportunity to meet over 3,000 companies and exhibitors from 115 countries.

According to Pie Ntwari, the Public Relations officer at National Agricultural Export Board (NAEB), “the exhibition will be an opportunity for Rwandan companies to promote trade of roses and summer flowers.”

Ephrem Kwitonda, Sales and Marketing Officer of Bella Flowers Company Limited told KT Press; “This is the third time my company has been to the IFTF. It has always been a good opportunity to link up to new clients.”

Kwitonda revealed that since last exhibition their exports increased to 20 tons from 7 tons previously.

“Rwanda flowers are popular on the European market but still facing challenges of rare flights to some countries including South Korea and Japan,”Kwitonda said.

On the continent, Rwanda is competing with the best floriculture countries including; Kenya, Ethiopia, Zimbabwe, Uganda and Tanzania respectively.

A group of 625 students have so far graduated at a 11 month program from Kinneret Academic College and Israel Agro studies Center – Israel.