President Paul Kagame does not believe that controlling internet and limiting access to broadband could be a solution to cyber crimes.

The president rather supports that, the world needs means to enforce laws that would help to hold individuals accountable for what they do online just as it is common practice for offline offenders.

While announcing some items on the schedule, the president mentioned a case of harmful content, which necessitated a report on child safety online by the broadband commission.

This brought him to the point that, “Large scale violence is always preceded by a process of dehumanization through the spread of ideas that justify killing.”

He mentioned a case of Rwanda and said: “We had a situation like this in my own country, twenty five years ago, that is why we work to insure that ideologies of hatred have no place in public domain.”

The 1994 Genocide against Tutsi where over one million Tutsi were killed was preceded by ten traditional stages of the genocide which culminated with the massacre itself.

“There was no internet in Rwanda in 1994. Radicalization is therefore not a new phenomenon, much less by product of modern social media,” Kagame said and continued: “But while the challenges of today are not qualitatively different, technology has indeed changed the landscape in two important ways: The first is speed. The internet is an accelerant; it costs very little to reach a lot of people very quickly. The second is the absence of accountability. Individuals who cause harm can do so anonymously.”

All this, Kagame said it should properly be regarded as a form of cybercrime.

But for the president “We do not need special rules and regulations for the virtual world nor is there any valid reason to constraint basic freedoms or limit access to broadband. That would only slow development and further deepen inequality.”

“We simply need the means to enforce our laws and hold individuals accountable for what they do online just as we do offline.”

The UN broadband commission which President Paul Kagame co-chairs is working on several projects that will enable universal access to broadband by 2030.

Reports on the progress are also on the schedule in this city of the United States of America. 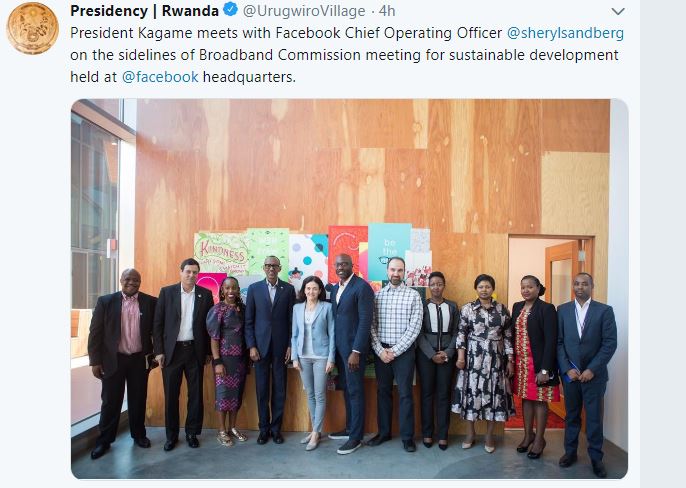