For those who know Rwanda’s basic education of 1990s and way earlier, things have changed where  a child no longer walks miles home for lunch.

Neither does a child carry food in banana leaves to school anymore.

All these traditional ways parents used to use to look after their children have since 2014, been replaced by a holistic school feeding policy.

It includes several items, but most important is the players that are involved; mainly parents, schools to some extent, Ministry of Education and partners who have to make it work.

Five years down the road, apparently the school feeding program has failed to take shape.

According to school directors, in the start of the program, the Ministry of education contributes Rwf56 per child per day for lunch, while parents contribute an average Rwf 1500 per month. These two players almost pay the same amount.

The contribution is decided in Parents – Teachers Associations (PTAs).

In total, the Ministry of education alone pledged to raise Rwf7 billion for school feeding in 2019.

Schools say that the money does not match market prices for the meal which includes maize paste, rice, beans and vegetables.

Alexis Nzeyimana, Director of GS Gishihe in Kigoma sector, Huye district told KT Press that the money from Ministry of Education (Mineduc) subsidy can no longer be calculated as Rwf 56.

“When we buy the food stuffs, the money is taxed. The Ministry should top up. I don’t want to suggest how much they should add, but I consider that this money is already insufficient,” Nzeyimana said.

GS Gishihe feeds 643 students with each raising Rwf 1500 per month.

In May, the school will feed them for 20 school days, while Mineduc will provide for 20 days too.

Mathematically, Mineduc will raise Rwf 720,160 for May, while parents are expected to raise Rwf 964,500 if they all comply.

Leaving all the other expenses constant – paying kitchen labor, firewood, taxes, every child would be entitled to a total Rwf2,620 for lunch for 20 days.

This is equivalent to Rwf131 per day.

Considering the contribution of parents for their children, the school cannot raise all this, unless a miracle happens.

According to Nzeyimana, the Rwf 1500 per month appear to be little, but it’s not every parent who raises it.

In other terms, only 178 students raised money to feed the entire school community – 643 students.

This issue of noncompliance is cross-cutting among the schools of the country.  While Gishihe tries to bridge the gap by growing crops in the school farms, not every school has an alternative. 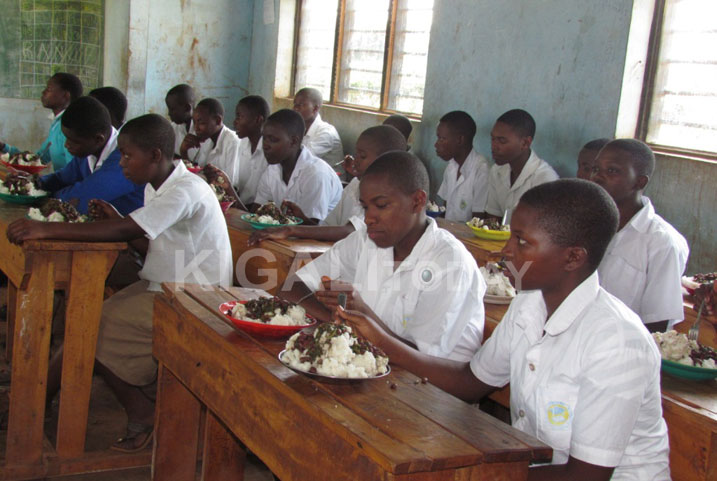 Vincent Sengabo, director of Groupe Scolaire Nyabimata in Nyaruguru district told KT Press; “When we have enough from the Mineduc, we feed all the students, but, in the middle, as our stock diminishes, we opt to feed only those students who have raised the money, otherwise we cannot make ends meet.”

A child at Nyabimata has to raise Rwf 1000 per month but it does not come as expected.

Feed all the students at any cost-Mineduc

For the Ministry of Education, it is useless to look at weaknesses here and there and decide that the program is a failure.

Isaaic Munyakazi, State Minister in charge of Primary and Secondary Education told KT Press, that, in several schools, the school feeding was a success.

However, he is disappointed that in some others, students “are denied meals or sent back home on ground that they did not comply.”

“Before end of this year, we shall have fine-tuned this program to remove all gaps,” Munyakazi said requesting schools never to deny students meals.

No magic procedure to force parents to comply, the ministry will use a campaign to sensitize them.

At some point, parents agree that a sensitization is required just to awake those parents who think that government alone should raise the money, “but it will not answer the issue of poverty; some parents cannot raise the required money,” according to Faustin Sinzibiramuka, a member of Parents-Teachers Association.

“Our role, though, is to tell parents that when you send a child to school, it is also good to think about what they should eat.”