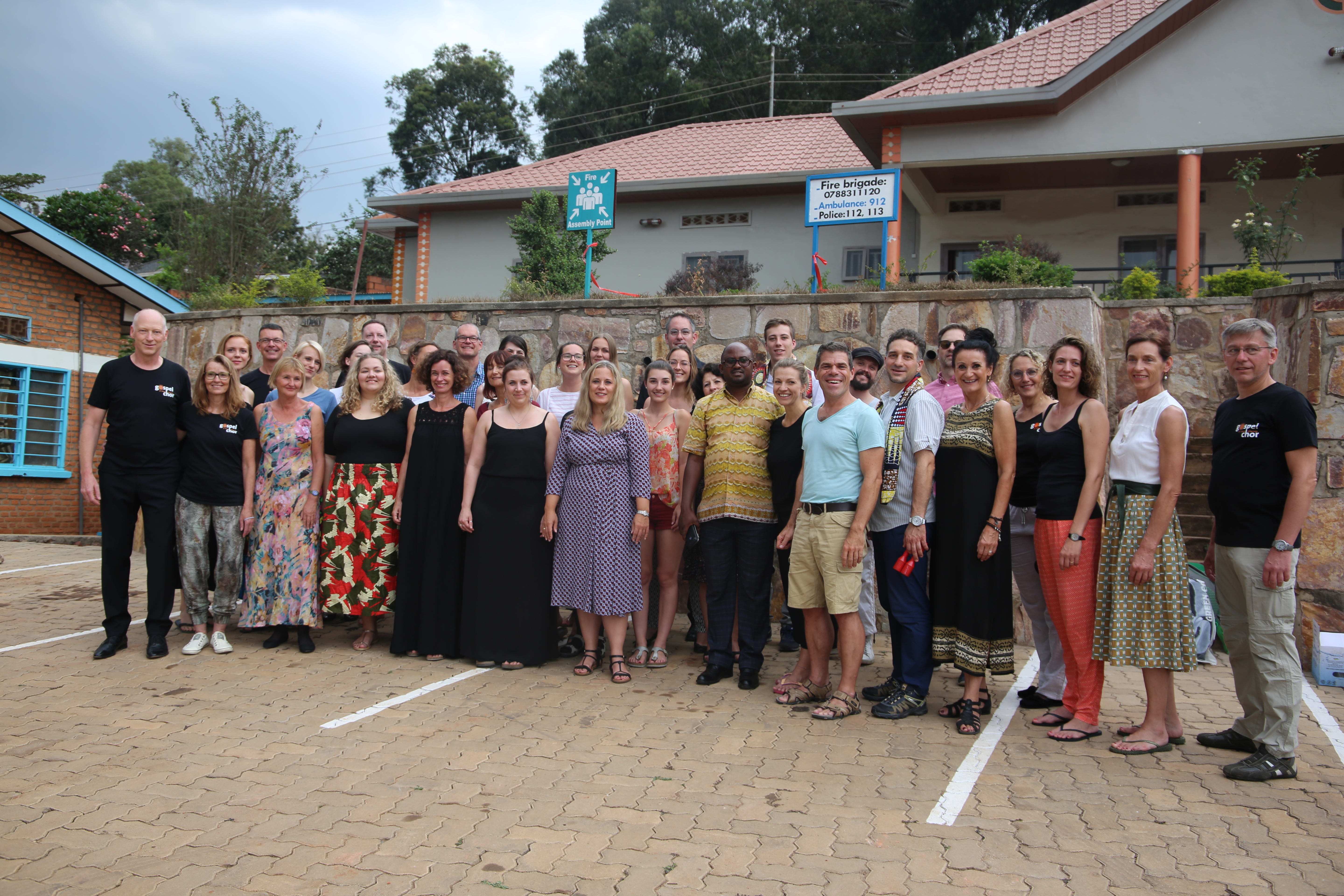 This comes as part of the support to the Rwandan community that the choir has been supporting for years through connections with the Presbyterian Church in Rwanda commonly known by its French name Église Presbyteriénne au Rwanda (EPR).

The 44 member choir team landed in Kigali in Tuesday this week and will be taking part in the 14-days 2019 church festival dubbed ‘Ndatuma nde’ (whom will I send) that started on Friday afternoon at one of the oldest EPR church parishes in Rwamagana district, Eastern Province.

The team visited one of the local associations for (Tubahumurize Women’s association) which they have financially supported to create life skills for female victims of violence and marginalization living in Rwanda.

Since its creation in 2006, Tubahumurize has assisted over 1,000 women and indirectly over 1500 children born of the women beneficiary families.

At the visit, the team managed to witness how Rwandan women make African clothe fabrics which included clothe neck and head scuffs, hand bags, woven Rwandan baskets among others for sale, in order to earn a living from the proceeds.

“We shall be wearing these scuffs in Rwanda during the Ndatuma Nde festival and during our performances back in Germany,” said Claudia Wippich –  the choir’s led singer.

According to Bastian Pusch, the choir head of delegation and conductor, this is not going to end at that but create more business connections for the association.

“We have many German fabric sellers who have asked for the Rwandan fabric, of which we are going to connect both sides so that these women can sell their products in Germany,” Pusch revealed.

After praying, singing together and listening to stories of Rwandans at the association, Pusch said that Rwanda and Germany share a similar history of human catastrophes and especially acts of genocide, but Rwanda has amazingly recovered compared to German.

“We are definitely impressed with what we have seen here and how Rwanda has managed to transform in the last 25 years, of which we as Germans have not done so fast as Rwandans, 80 years after we too had a similar human catastrophe,” Pusch said.

Tubahumurize officials said that they got to know the Germans through volunteers ,but the group commitment to connecting them to bigger markets will enable the association members to sell more products.

“We see this as an act of friendship that will also enable our members to earn a better living out of their sales but the proceeds will also be used to train 90 children benefactors with life skills every year,” said Jeanne Mwiriliza – the Director of Tubahumurize association.

On the other hand, EPR officials told KTPress, that inviting the German choir to Rwanda was a way of building a strong tie with the choir members, which originally started as a personal initiative and later grown into group initiative towards supporting Rwandans.

Ndatuma Nde festival is the seventh of its kind and coincides with the seven EPR churches where the event has been held in the previous years, and this year it will also have Kimara Lutheran choir from Tanzanian and several local worship teams.

Besides participating in performing 10 songs per day in the next fourteen days festival, the German choir will also visit another orphan association (Wikwiheba Project) in Gicumbi district, Kigali Genocide memorial site, spend money while visiting Nyungwe and Akagera National parks and have aqua events on Lake Kivu, in Karingi district town.