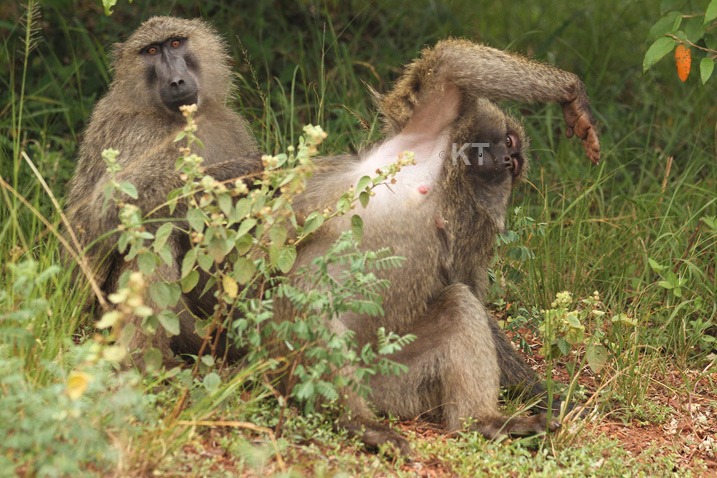 They are strong, can be aggressive, fearless, completely lacking in empathy, and they make the worst possible neighbours, as residents of Nyagatare district, in the Eastern province, are finding out.

After a savage attack by one of these neighbours, Alphonse Niyomugabo, 13 years old, barely escaped with his life. His human neighbours had to kill the attacker to save the boy, who is now recovering well in a hospital bed, at Kanombe military hospital. Doctors, however, had to work hard to save the boy’s badly mauled leg.

The feral neighbours are baboons. The attack may have shocked residents of Nyagatare, but it will have come as no surprise to them. Until recently, it was not uncommon to find baboons in the town itself.

They would come hunting for food, uninvited boorish guests to restaurants, and homes. It was not beyond them to lift saucepans off stoves as food cooked, and take it away to dine peacefully, undisturbed by its owners.

This problem has been largely, though not completely solved by a well-established, coordinated response from the Rwanda Development Board (RDB), the government agency, whose responsibilities include management of national parks, and wildlife conservation. But, how to accommodate an expanding population and wildlife conservation, remains a perennial challenge.

Telesphore Ngoga heads the department in the RDB, with the onerous responsibility of overseeing the management of the national park, and was among the first to be informed of the attack on Niyomugabo.

If you believe the local residents’ understanding, the Baboon sought out the boy in some kind of anthropomorphic revenge attack, after the boy had chased it away with dogs.

According to scientific research, their suggestion isn’t so farfetched. Baboons have been found to be capable of differentiating between individuals, not only among themselves but, of other species. But, Ngoga smiles a little at the notion of a revenge attack and offers what he suggests is a more plausible explanation.

“Baboons and dogs do not see eye to eye” he explains. “The boy chased the Baboons with dogs, provoking them. This particular animal fought back, as they tend to do, attacking the dogs in turn, which fled to the boy for protection. The Baboon attacked him, most likely to get to the dogs.”

It just so happened that an RDB team was in the area, an ambulance was called, and the boy was immediately taken to the local medical centre, where his injuries were judged especially serious, and he was transferred to Kanombe hospital. But, even in normal circumstances, the RDB has procedures in place to deal with such cases.

The local leadership informs RDB teams in case of any incident, who then deal with it accordingly. In most cases, it is about compensating people for property destroyed by wildlife.

RDB works with the Special the Guarantee Fund, which is responsible for all compensation cases.

The fund works on the basis of insurance and was initially established to compensate people in motor vehicle accidents, where the normal compulsory insurance did not cover them. It was extended to cover cases of damages caused by wildlife.

As the fund’s Director-General, Dr Joseph Nzabonikuza, explains, “wildlife is a national asset, it belongs to the nation, the nation pays out on genuine claims, as would a normal insurance coverage, even though of course, those who are compensated do not pay insurance premiums.”

Once the boy’s family was referred to the fund, the established procedures snapped into place.

“We have Memorandum of understanding with a number of hospitals for just such cases” explains Dr Nzabonikuza, “it is then a matter of letting them know that we are responsible for all the victim’s expenses.”

As well as medical expenses, the fund will compensate for the loss of income, where appropriate, and whatever trauma it is judged the victim will have suffered.

Serious as the boy’s injuries are, it could have been much worse, and it highlights a problem that will only grow as the human population expands.

“It is not just with Baboons, or just in Nyagatare” Ngoga explains, “when the national park was pushed back to allow more land to the human population, a number of animals were trapped outside the park. In parts of the country, Hyenas, Hippopotamus, monkeys, can be found close to, or in the midst of areas of human habitat.”

“We have a choice” he continues, “we can kill off all the animals, but, they too have some right to life. Human beings are of course our first priority, but, it is better for all of us, if we find a way of conserving wildlife, so that instead of it being regarded as a problem, it is a solution to many social needs.”

A radical solution to a growing problem

The RDB is now in consultation with local communities about a radically ambitious approach that could be the answer to the pressure on wildlife, not only in Rwanda but, across other parts of the world.

“Wildlife conservation is an asset” explains Ngoga, “it just has to be realised. It starts with education, which we are doing right now. People in Nyagatare and other areas need to learn how to behave with wildlife. Simple things like not feeding the Baboons for instance. Baboons will remember where they get food and will return there, again and again. And because like us, they are diurnal animals, they will come during the day.”

The plan under consideration is to work with local communities to find a way for them to learn to cohabit with wildlife. And it is not just wildlife, many plants are becoming extinct, as people encroach on what was once wild land.

The RDB envisages communities, not in competition with nature, but, working and living in harmony with it. It sounds almost too idyllic, but, for Ngoga and the RDB, it is a practical response to a pressing need.

“It does not have to be just national parks, where tourists go to visit wildlife, and local flora and fauna” he enthuses.

“People can fish in dams created for hypos, for instance, pick fruit in special forests preserved for monkeys, and look after endangered plants,”

“They can profit from tourism to their communities. The important thing is for the communities to take ownership of conservation, and see conservation of their flora and fauna as theirs, rather than the government’s conservation policy.”

“People can manage these projects themselves. For instance, different cooperatives could manage dams for the hypos, and make sure fishing is safe and sustainable, and endangered plants are protected.”

Ngoga points out that although such a vision is still on the drawing board, it is already beginning to happen, especially with the policy of ring-fencing a percentage of proceeds from tourism, for communities adjacent to the national park.

As plants and wildlife across the world become extinct at an alarming, could the RDB’s plan be a vision of the future others beyond Rwanda’s frontiers can and arguably, should embrace?