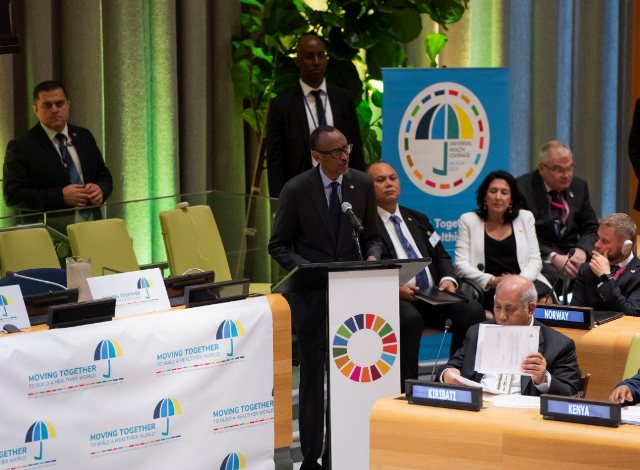 President Paul Kagame has urged global leaders and policymakers to take the lead in making Universal Health Care (UHC) for all a reality.

President Kagame made the call on Monday in New York while addressing Heads of State and Government as well as Heads of Delegations from across the world at a High-Level Meeting on Universal Health Care, ahead of the 74th United Nations General Assembly.

Addressing the gathering themed “Universal Health Coverage: Moving Together to Build a Healthier World”, President Kagame alluded to the milestones Rwanda has registered in terms of ensuring access to healthcare for all, pointing out that healthcare for all is a must.

“Universal access to health care is a defining feature of the modern social contract. Good health affords people dignity, and enables them to use their talents to the full,”

“Today, we renew our joint commitment to affordable care. No parent should have to choose between food and medicine for their families,” President Kagame said.

The Head of State noted that innovation, domestic resource mobilisation, and international partnership, are the key strategies for making healthcare accessible to everyone, taking a moment to share Rwanda’s experience.

“First, we have expanded our network of Community Health Workers from two per village, to four. That translates into one worker, for every 40 households, helping ensure that no one is left behind,”

“Second, to improve equity in access, Rwanda set a target that the walk to the nearest health facility should be no more than 25 minutes. Half the country now meets this standard, and the work continues,” he explained.

He added that today 93 per cent of Rwandan girls below the age of 13 have received the Human Papilloma Virus (HPV) vaccine. He also highlighted the importance of gender equity, as well as the urgency of including treatment for non-communicable diseases, such as cervical cancer.

“Health insurance is the foundation of our policy framework. More than 90 per cent of the Rwandan population is now covered with a mixture of community-based and private schemes,” the head of state said, adding, however, that barriers to achieving high-quality UHC persists in Rwanda as it is elsewhere around the world.

He, however, added that with the commitment of global leaders and policymakers, access to healthcare for all can be achieved. “It is the responsibility of everyone gathered here, to take the lead in addressing these gaps, and leave behind a legacy of Universal Health Coverage for future generations.

It is possible,” he said. The High-Level Meeting on Universal Health Care brought together Heads of State, political and health leaders, policy-makers, and universal health coverage champions to advocate for health for all. 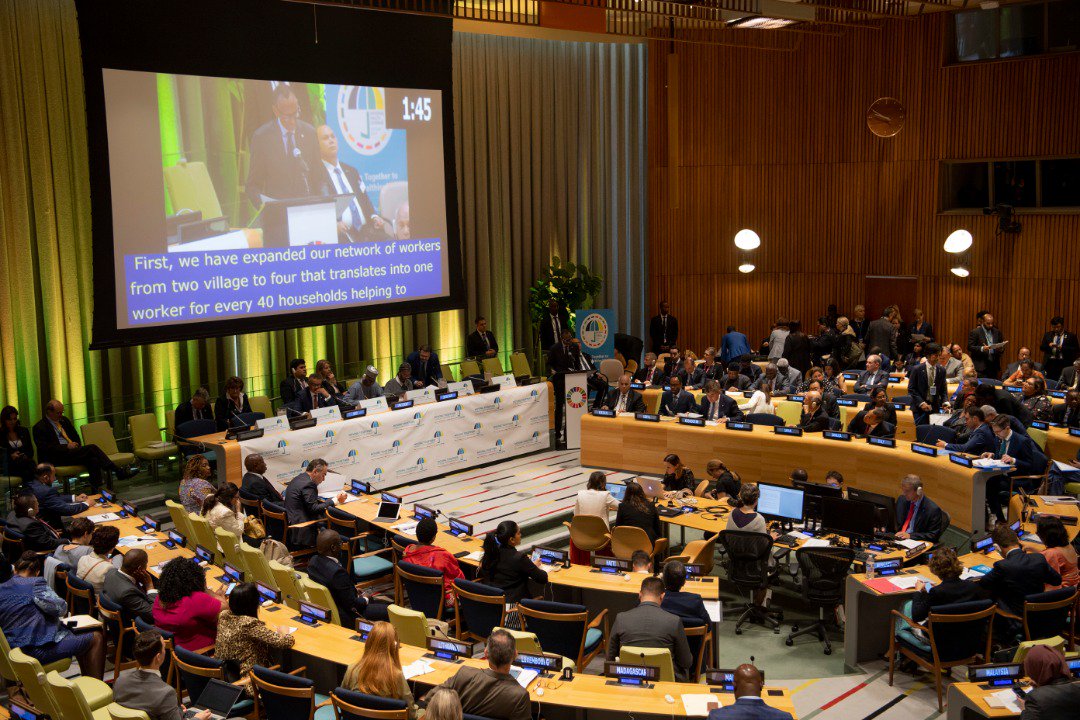 The President of the 74th session of the UN General Assembly Tijjani Muhammad-Bande said that access to healthcare for all is a right and should be considered so.

“Access to adequate health services is a human right. Not a privilege. In this time and age, there is no acceptable reason for which anyone should die from preventable and detectable diseases,” he said.

World leaders at the gathering adopted the first high-level UN Political Declaration on Universal Health Coverage and committed to strengthening and investing in Primary Health Care during the meeting in New York.

World Health Organisation (WHO) welcomed the milestone, describing it as the most comprehensive set of health commitments ever adopted at this level.

“This declaration represents a landmark for global health and development. The world has 11 years left to make good on its sustainable development goals. Universal health coverage is key to ensuring that it happens,” the Director-General of WHO, Dr Tedros Adhanom Ghebreyesus, said on Monday.

“Universal health coverage is a political choice: today world leaders have signalled their readiness to make that choice. I congratulate them,” Dr Tedros added.

According to WHO, in adopting the declaration, U.N. Member States have committed to advance towards UHC by investing in four major areas around primary health care. These include mechanisms to ensure no one suffers financial hardship because they have had to pay for healthcare out of their own pockets and implementing high-impact health interventions to combat diseases and protect women’s and children’s health.

Countries are also expected to strengthen their health workforce and infrastructure and reinforce governance capacity. They will report back on their progress to the U.N. General Assembly in 2023.

“Now that the world has committed to health for all, it is time to get down to the hard work of turning those commitments into results,” said Melinda Gates, Co-Chair of the Bill & Melinda Gates Foundation.

“We all have a role to play. Donors and country governments need to move beyond business as usual to bolster the primary health care systems that address the vast majority of people’s needs over their lifetimes,” said Gates.