Kayumba Nyamwasa is A Traitor, A Manipulator – Gen. Kabarebe 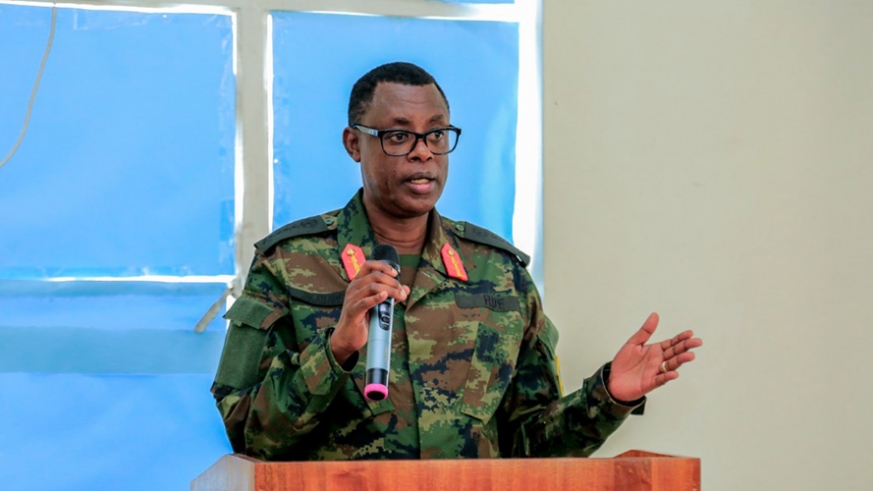 Self-exiled former army chief of staff and founder of subversive outfit Rwanda National Congress (RNC) is a traitor who abandoned a system that made him who he is and resorted to fighting it instead.

This was said by the Security Advisor to the President, Gen James Kabarebe on Monday while addressing over 1,000 members of the Rwanda Defence Force (RDF) Reserve Force currently undergoing a six-week long training exercise in Mukamira Barracks, Nyabihu District.

Responding to a question from Col (Rtd) Martin Nzitonda, a former member of the Rwandan army (Ex-FAR) and the Democratic Forces of the Liberation of Rwanda (FDLR), on what Rwanda should do to deal with negative groups keen on destabilising the country, Gen Kabarebe extensively spoke about Kayumba Nyamwasa, to give a proper background of the dissident general, for context and perspective.

“There is nothing whatsoever he can point out and say I did this by myself so I should be rewarded for it. There is none at all. Instead he benefited from RPA tremendously. Sometimes people take advantage of opportunities, based on the events at the time, building on the actions of others to become something important,”

“But in actual sense, when you lack the values and the character, the opportunity will be of no use in the end,” Gen. Kabarebe said of Kayumba.

Gen Kabarebe, who said he knows Kayumba very well, revealed that he personally initiated Kayumba into joining the rebel group led by Uganda’s President Yoweri Kaguta Museveni in 1983. He said that at the time, Kayumba had secured documents to go to work in South Africa but when he noticed that he could become something after liberating Uganda, he seized the opportunity.

When Museveni captured power in 1986, Gen Kaberebe says Kayumba went on to scheme for a post as an administrative officer in the northern part of Uganda. He said that that after getting the post, he schemed further for more personal gains while others were now planning to liberate Rwanda after liberating Uganda.

Gen. Kabarebe said that for a long time, Kayumba used his scheming ways and short cuts to get money and power, manipulating people into validating him as though he was a high ranking officer.

“The signs started appearing early. He had always been about power and personal gain. Even when we started the liberation struggle, Kayumba was busy stealing cows from the ranches in Eastern Rwanda, taking them to Masaka in Uganda where he sold them off,” Gen. Kabarebe said.

The former Defence Minister said that Kayumba rose through the ranks in Uganda and in RPA through scheming and manipulation but he was not the most effective planner, nor was he a prolific fighter at the frontline.

Narrating a story of the first weeks of the liberation struggle, Gen. Kabarebe said that after RPA fighters encountered challenges in the Eastern part of Rwanda, President Paul Kagame, then the commander of RPA forces, took over the control of the situation and reorganised the fighters in order to re-launch the attack.

At this point, while others were thinking of new strategies, Kayumba was the most scared of all and had even contemplated abandoning the struggle despite having been entrusted with the role of heading intelligence in RPA.

“I can tell you for a fact that even that role as the head of intelligence, Kayumba got it out of his usual scheming. Having done everything to have President Kagame attend his wedding he had effectively managed to position himself for the role,”

“As the head of intelligence, he managed to make sure that he avoided anything that would put him on the frontline. Had the command-in-chief asked him to head a mobile unit on the frontline, it would have been a different story altogether. He would have run away,” Gen Kabarebe said.

Recalling an incident on October 25, 1990, Gen. Kabarebe said that while in a planning meeting with Lt. Gen Charles Kayonga, Kayumba joined them but out of fear, his eyes were almost popping out and he went on to propose that they abandon the struggle and head back to Uganda.

The two men brushed off his fears and encouraged him to fight on, promising him that the battle will be won.

“We told him that these are normal challenges in a war. We will reorganise, attack again and win the struggle. He insisted that we withdraw and go back to Uganda. I will never forget that time. He was really scared,”

“But after he was given the position of intelligence head, he now became firm and started claiming some privileges and power. This is someone who nearly abandoned the struggle,” he said.

The General also recalled another scene on Christmas, December 25, 1991, in Kiyombe area of Northern Province, when RPA fighters came under intense fire from FAR forces, on the ground and in air. RPA commanders met the commander President Kagame and proposed to retreat back to Uganda to reorganise.

“I recall very well that Kayumba was at the forefront of commanders who were suggesting that we retreat back to Uganda and request the government to give us a location in north eastern part of Uganda bordering South Sudan and Kenya, in Kidepo National Park, for us to reorganise,”

“Indeed, this turned out to be a decision driven by cowardice. It is at this point that the commander-in-chief made a decision that we relocate to the mountains in Northern Province. It is from here that on January 23, 1992 we re-launched the attack on Ruhengeri and freed prisoners,” Gen. Kabarebe said.

Gen. Kabarebe said that throughout the struggle, Kayumba, who is currently exiled in South Africa, would appear when the situation has calmed down and disappear when the fighting intensified.

In 1994 after the signing of the Arush Peace Accord in 1994, one of the provisions of the peace agreement was the merging of RPA and FAR, with RPA taking 40 per cent of the positions in the army while FAR would claim a majority share of 60 per cent. This was aimed at creating one force.

When it emerged the two fighting sides would merge to create one army, some people opposed the idea, fearing that FAR would renege on the agreement and finish off the rebels in the barracks since they were in superior in numbers. It was a concern some people shared, Gen Kabarebe recalled.

“Kayumba was among those who didn’t support the merger. Instead he was saying that after the merger, people who want to leave the army can be left to focus on other things but the truth is, the people who opposed the idea were simply scared,”

“Later as the talks progressed, it became apparent that RPA would claim some high ranking positions in the army after the negotiations. The commander President Kagame had started to promote people in preparation to take up these posts,” he further said.

He pointed out that at this point, Kayumba was effectively decorated with the rank of Colonel and since had studied law, he was poised to take up a role of the Chief Staff of Gendarmerie. He abandoned his earlier plan to leave the army and now repositioned himself for the position.

“It has all been about scheming and being calculative, seizing opportunities whenever they popped up. I recall that well. When the rumour of him being given a high ranking position circulated, he now tried to act as though he was firm and focused on the cause. He was selfish and greedy,” Gen Kabarebe said.

He added that as the commander continuously promoted individuals to prepare them for leadership roles, others like Kayumba confused it with their own abilities rather than looking at it as a privilege of being promoted and prepared for leadership.

Gen Kabarebe said that Kayumba and others misused this goodwill and started thinking that they were self-made rather than crediting the system that made them who they are –something he said is a sign of being ungrateful.

“There was no other reason for promoting them. Sometimes he [President Kagame] promoted people well knowing their weaknesses but he ignored them and focused on nurturing them as leaders. But for Kayumba, he turned out to be a self-centred, ungrateful traitor who misused the opportunity,”

“As a result, in 1995, even when others were grappling with finding solutions to deal with the devastation left behind by the 1994 Genocide against the Tutsi, Kayumba was busy amassing properties. He was buying houses, farms and cars. He had huge farms in Nyagatare district,” he said adding that his actions at this point were a cause for concern.

He said his scheming had been on-going for many years, including engaging in acts that could be seen as treasonous such as talking to external forces and abandoning duty to start a course in a foreign country without the consent of the commander-in-chief.

According to General Kabarebe, Kayumba had over the years proved he is greedy, manipulative and selfish, which is why he fell out with the same people and system that made him what he was.

They Are Conspiracy Theorists –Minister Sezibera On Rumours On His Life