For the first time in about two months, the Minister of Foreign Affairs Dr Richard Sezibera has responded to reports regarding the state of his health, labelling those who spread rumours about his life as ‘conspiracy theorists’ and ‘murderous hacks’.

Minister Sezibera on Tuesday made a public comment on his health through Twitter, reacting to a tweet by his deputy in charge of the East African Community (EAC) Amb Olivier Nduhungirehe, which was rebuking publications which have been reporting about the Minister’s health, some even proclaiming him dead using a fake tweet under his name.

“They are conspiracy theorists. Some are murderous hacks with limited wisdom and no sense of decency! Expect no less…..” Minister Sezibera tweeted on Tuesday afternoon.

He was responding to a tweet by Nduhungirehe on the ‘fake news’ surrounding Dr Sezibera’s life, which has been a subject of speculation, mainly by Ugandan publications, over the last two months.

“They tried all kind of vicious lies and #FakeNews about Minister @rsezibera .They uttered them on their online radios and on their tabloids. And today, desperate as they are, they went a step further, spreading on Whatsapp a ridiculous fake tweet under my name! Shame on them!” Minister Nduhungirehe tweeted on August 31.

The health of the seasoned diplomat and Government Spokesperson has been subjected to a number of rumours, particularly fuelled by a Ugandan-based publication ‘Command Post’ which is reportedly linked to Uganda’s Chieftaincy of Military Intelligence (CMI).

The first article was published on August 7 purporting to be quoting family sources, making all sorts of allegations on the Minister’s health.

Rwanda has repeatedly rebuffed the reports with the government deliberately refusing to discuss the rumours publicly, prompting Ugandan publications to publish more reports which Minister Nduhungirehe dismissed as ‘fake news’ not worth any clarification.

The rumours were further escalated by the Ugandan Government Spokesperson Ofwono Opondo who on August 8 tweeted an article by Command Post alleging that Dr Sezibera was admitted in critical condition in a Kenyan hospital. 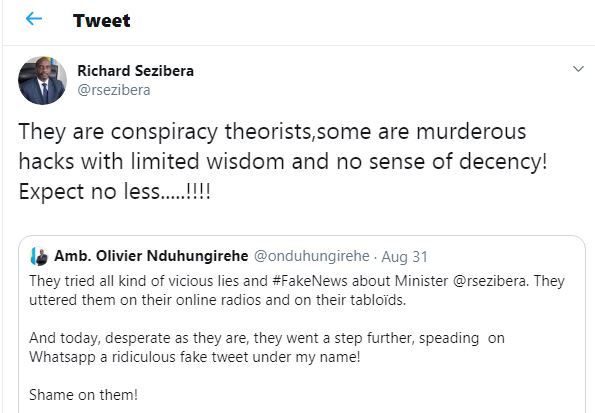 Opondo’s tweet, which came at a time when relations between Rwanda and Uganda were not good, was seen as a sign of provocation, with Mr Nduhungirehe particularly rebuking Opondo for spreading fake news, describing his actions as ‘despicable’.

“Here is @OfwonoOpondo, Spokesperson of the Government of #Uganda, endorsing vicious #FakeNews from a tabloid owned by the Chieftaincy of Military Intelligence. Despicable!,”Amb. Nduhungirehe said.

The website also went on to claim that Minister Sezibera, who was allegedly poisoned, was last seen in public on July 11 in London at an international event.

On August 15, the same tabloid, quoting reliable sources claimed that Dr Sezibera had passed due to the same food poisoning incident, adding that relatives and friends had been denied no access. Still Rwanda did not respond to the rumours.

Dr Sezibera had last tweeted on July 14, about Rwanda joining the Asian Infrastructure Bank which he said is an important step the country before taking a hiatus from social media and returning on August 26, retweeting President Paul Kagame.