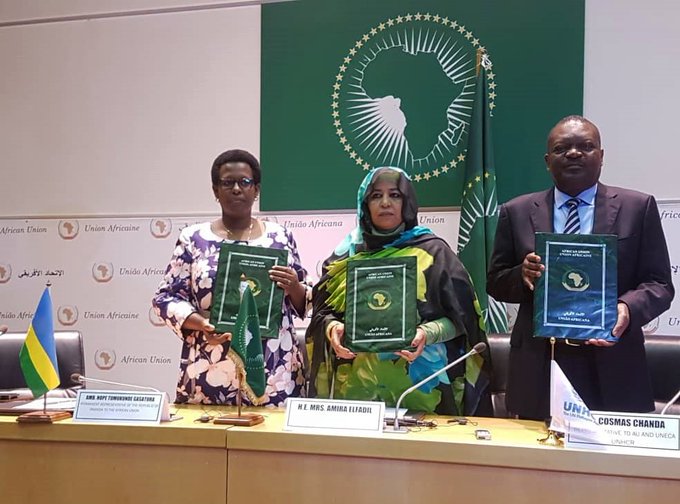 The first batch of 500 African refugees stuck in precarious conditions in Libya is set to arrive in Rwanda ‘soonest’ following the signing of a Memorandum of Understanding (MoU) between the African Union (AU), the Rwanda Government and the United Nations High Commission for Refugees (UNHCR) to evacuate them on Tuesday.

The MoU was signed by Amb. Hope Tumukunde on behalf of Government, Cosmas Chanda, refugees representative to the African Union and Mrs. Amira ElFadil, African Union Commissioner for Social Affairs.

Addressing the press in Kigali on Tuesday following the signing of the MoU to implement the Emergency Transit Mechanism, the Minister in Charge of Emergency Management Germaine Kamayirese said that Rwanda has not taken funds from Europe or any other country to accommodate the refugees.

President Paul Kagame in 2017 said that Rwanda was willing to take in up to 30, 000 refugees who were stranded in the conflict-ridden Libya following a CNN documentary that showed that some African refugees destined for Europe  were stuck in Libya and were being auctioned off in open markets.

President Kagame, who at the time was about to become the AU Chairman, urged for an urgent solution to the crisis, with at least 400, 000 African immigrants thought to be stuck in the Maghreb country while thousands perished in the Mediterranean Sea trying to get to Europe.

Minister Kamayirese said that Rwanda made the humanitarian commitment to bring in the refugees as part of an African solution to an African problem.

“Rwanda has not taken any money to honour the commitment to host African refugees from Libya. It was our proposal and we are committed to it. We believe in African solutions to African problems. We don’t have to wait for someone from outside to help us,” Kamayirese said, dismissing reports that Rwanda will in return receive money from Europe for taking in the refugees.

Under the agreement signed in Addis Ababa on Tuesday, Rwanda will receive and provide protection to refugees and asylum-seekers, as well as others identified as particularly vulnerable and at-risk, who are currently being held in detention centres in Libya.

They will be transferred to safety in Rwanda on a voluntary basis. The first batch will be hosted in Gashora Transit Camp in Bugesera where the government and UNHCR say they have established ‘basic facilities’ to support the refugees who will be evacuated in a matter of days.

According to a joint statement by the government and the AU, under this agreement, a first group of 500 persons in need of international protection will be evacuated but no dates have been indicate for the exercise.

“The group is principally made up of people originating from the Horn of Africa and includes children and youth at risk. After their arrival, UNHCR will continue to pursue solutions for the evacuees,” the statement said.

“While some may benefit from resettlement to third countries, others will be helped to return to countries where asylum had previously been granted, or to return to their home countries if it is safe to do so. Some may be given permission to remain in Rwanda subject to agreement by the competent authorities,” the statement adds. 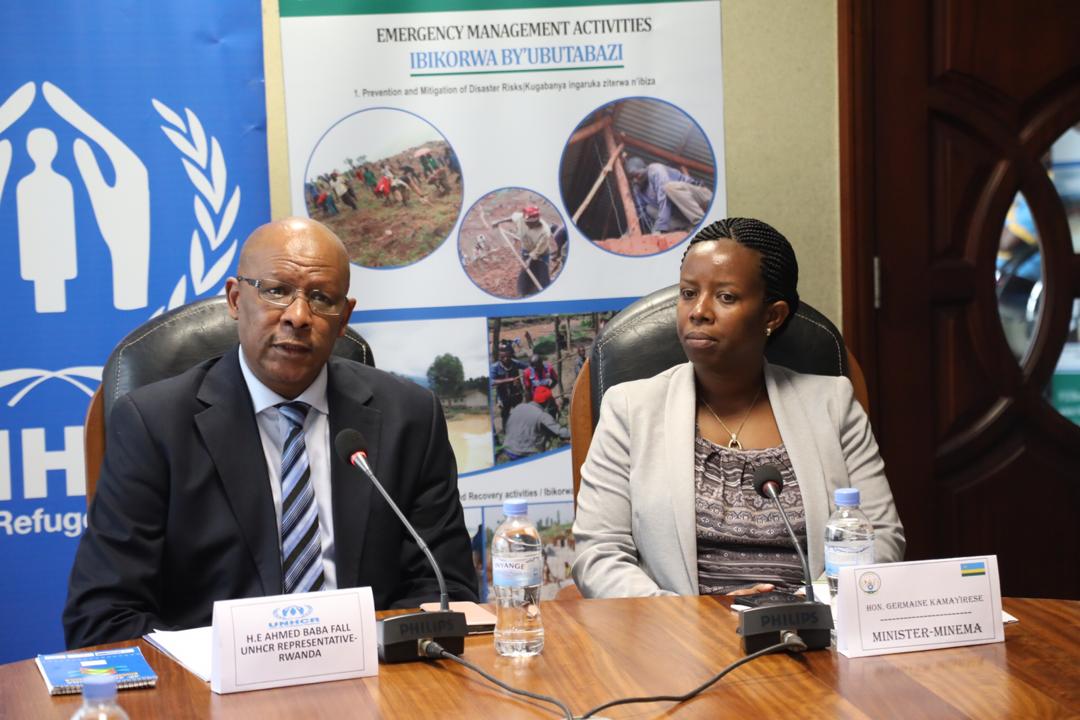 The UNHCR Representative to Rwanda Ahmed Baba Fall said that the signing of MoU which will lead to the evacuation of the refugees in Libya is a great milestone, pointing out that Rwanda is only the second country to voluntarily accept taking in refugees, the first one being Romania.

“This signing of the MoU in Addis Ababa this morning that will lead to the implementation of the ETM is a great milestone and a significant step. On the onset, I would like to thank the Government of Rwanda for its generosity for accepting to receive these refugees and asylum seekers who are in danger in Libya,” Fall said.

He gave a background of how the idea came about in 2017, pointing out that it has been a lengthy process involving different meetings and discussions but it has eventually led to a final solution to help the refugees whose lives remain in danger to date.

The evacuation flights are expected to begin in the ‘coming weeks’, and will be carried out in co-operation with Rwandan and Libyan authorities.

The AU will provide assistance with evacuations, mobilise resources, and provide strategic political support with training and coordination.

Both UNHCR and the Government have expressed optimism that the asylum seekers, who initially target to get to Europe by crossing the Mediterranean Sea, will find a new lease on life given the precarious conditions they have been living in.

The UN refugee agency has already evacuated more than 4,400 persons of concern out of Libya to other countries since 2017, including 2,900 through the ETM in Niger and 425 to European countries through the Emergency Transit Centre in Romania.

However, some 4,700 persons of concern are currently estimated to be held in dire conditions inside detention centres in the North African country.

UNHCR says they urgently need to be moved to safety and to be provided with protection, lifesaving assistance, and durable solutions. 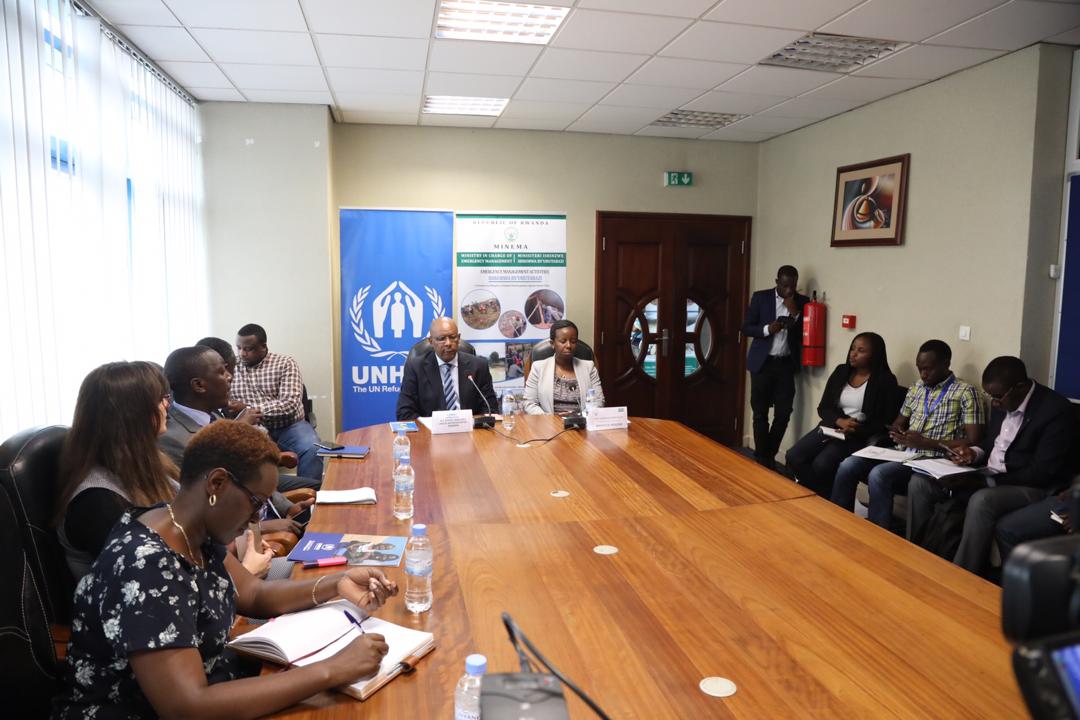 Press conference to explain components of the MoU

Minister Kamayirese also dismissed critics who say that Rwanda, which still has a considerable percentage of people living in poverty, has the resources to sustain refugees from other parts of the continent.

“As a country, we have an experience of our people living in other countries as refugees for many years. We know what it means to be a refugee. You don’t need to have all the resources in the world to support the vulnerable and people whose lives are in danger,” Kamayirese said, emphasising that Rwanda doesn’t need to be paid to do a humanitarian act.

She said Rwanda remains committed to taking in up to 30, 000 African refugees but only if they are willing to be repatriated.