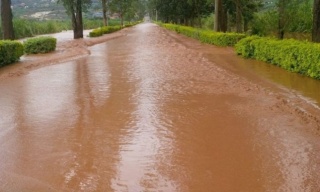 From 6pm Kigali time, heavy rains started pouring in the capital Kigali as many roads were flooded.

Rwanda Police issued a statement, warning travellers from using some of the roads across the capital Kigali.

“Good evening,
We would like to inform the public that due heavy rains, some roads in @CityofKigali are impassable right now,”

“Those are: the road Kimisagara-Nyabugogo, the road City Center-Kanogo-Kimihurura and the road poids lourds,” Police said in a statement issued via its Twitter handle.

“We will keep communicating any changes. Kindly bear with the inconveniences. Thank you,” Rwanda Police said.

Rwanda Police warning comes after Rwanda Meteorology warned of heavy rains that will hit the country throughout the month of December. 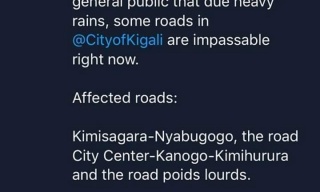 A national risk atlas released in 2015 estimated that a combined assault by disasters against Rwanda could cost the country a massive Rwf100 billion ($132 million).

In 2016, Rwanda experienced heavy rains that killed dozens of people and destroyed properties.

The unforgettable rains were most deadly in the villages of Gakenke district in Northern Rwanda, where at least 30 people were reported dead, with over 419 houses, crops and other gardens destroyed by landslides and floods.

An emergency situation was declared.

At the time, Musanze-Gakenke-Kigali road was blocked, as mudslides covered up the area.

The Beauty of Kigali During the Festive Season

Updated: 12 People Die as Rwandans Warned of More Threats Due to Heavy Rains