He has been described by many as ‘a friend of Rwanda’. The former Minister of Foreign Affairs, now Secretary-General of Organisation Internationale de la Francophonie (OIF), Louise Mushikiwabo, went as far as referring to him as “Mboweni wacu”, which means “Our Mboweni”.

For more than two years now, the South African Finance Minister Tito Mboweni has not been shy about expressing his love for Rwanda, tweeting many times about his experience, often comparing Kigali and Johannesburg in terms of cleanliness and organization.

From being impressed by Umuganda (Rwanda’s monthly community work) to completely being besotted by Kigali’s spotless streets, Mr Mboweni, who has been part of President Paul Kagame’s African Union (AU) reform team since 2016, has had a penchant of tweeting good things about Rwanda and encouraging his own country and government to borrow a leaf.

Mr Mboweni has been unequivocal in expressing his love for Rwanda, her policies and people. He has not shied away from comparing his own country with Rwanda, occasionally angering his ‘patriotic’ countrymates.

In one of the tweets he shared a photo of trash on the streets of Johannesburg and said “something you won’t see in Kigali” and in another tweet, he shared a map of Rwanda for those who didn’t know where Rwanda is.

“Some of you asked: Where in the map is your Rwanda. Here it is…My Rwanda!!” he tweeted in December 2018.

By referring to Rwanda as ‘My Rwanda’, Mboweni attracted a flurry of tweets from his countrymen attacking him, some describing him as “Mr Kigali”. 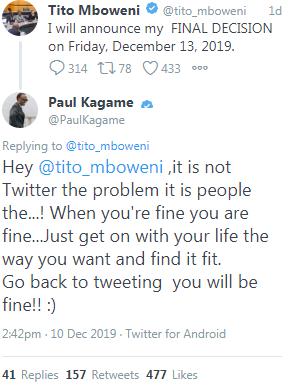 That did not deter him. He went on to educate the world about “Umuganda”, the monthly community work exercise Rwandans participate in, saying that it should be replicated in his own country and on the continent to make cities clean.

In July this year, he tweeted a photo of art crafts and accompanied it with a message “Feels good to be home. Kigali.” In several other tweets, he shared his experience with the national carrier Rwandair, freely posing for photos with the crew and applauding the service.

Last month, Mboweni called on his country to shut down the struggling South African Airlines and start another one.

In Mboweni, Rwanda had gained an honorary ambassador spreading the good message about Rwanda. In fact, in one of the tweets, he declared himself a citizen of Rwanda and started using “we”, “Our” and “my Rwanda” in his tweets.

It was just a matter of time before his countrymen came for him. An observer on Twitter remarked that South Africans don’t take it lightly when they learn that an African country is doing better than their country in some departments, especially when it comes from their own.

They have been consistent in attacking him, with some asking him to stay in Rwanda if he wanted while others attacked his personality. Twitter users also asked him to do something in his own country to make it better since he is a member of the government.

The vitriol directed to him however did not stop Mboweni from expressing his views about Rwanda and its leadership.

However in October, he gave in. He could not take it anymore, threatening to leave the social media site because it had turned into an abusive platform rather than one to share information and network.

“After a long thought process, I have decided not to do any original tweets anymore. I might, just might, retweet (not endorsement). I came to the conclusion that Twitter is no longer about its original purpose: ie to create a networked society. It is now an abusive platform,” Mboweni tweeted on October 30.

The South African politician took a hiatus from the platform only to return on December 10 after his latest trip to Rwanda.

“I was in Kigali over this weekend and I was told that it is a bad idea for me to leave Twitter. I respect my Kigali friends. Fikile Mbalula told me the same thing. I am thinking about my decision. For now, my decision stands. Twitter is no longer a networked society but ABUSIVE,” he tweeted.

“I was told in Kigali that my tweets about Kigali have made the country well known to South Africans and that many are now visiting RWANDA. I can confirm that a South African confirmed to me on RwandAir that they visited the country to verify my impressions. They confirmed my views,” he added.

Even then, Mboweni said that he would make a final decision on Friday, December 13. It is not yet clear if he will stay on the platform or continue to take a sabbatical but President Kagame has encouraged the SA Minister to stay the course and not abandon the platform.

“Hey @tito_mboweni, it is not Twitter the problem it is people the…! When you’re fine you are fine…Just get on with your life the way you want and find it fit. Go back to tweeting you will be fine!! :)” President Kagame responded to Mboweni.

To tweet or not to tweet, Mboweni’s decision will be known on Friday. Will he heed to President Kagame’s advice?  KT Press will keep you posted.