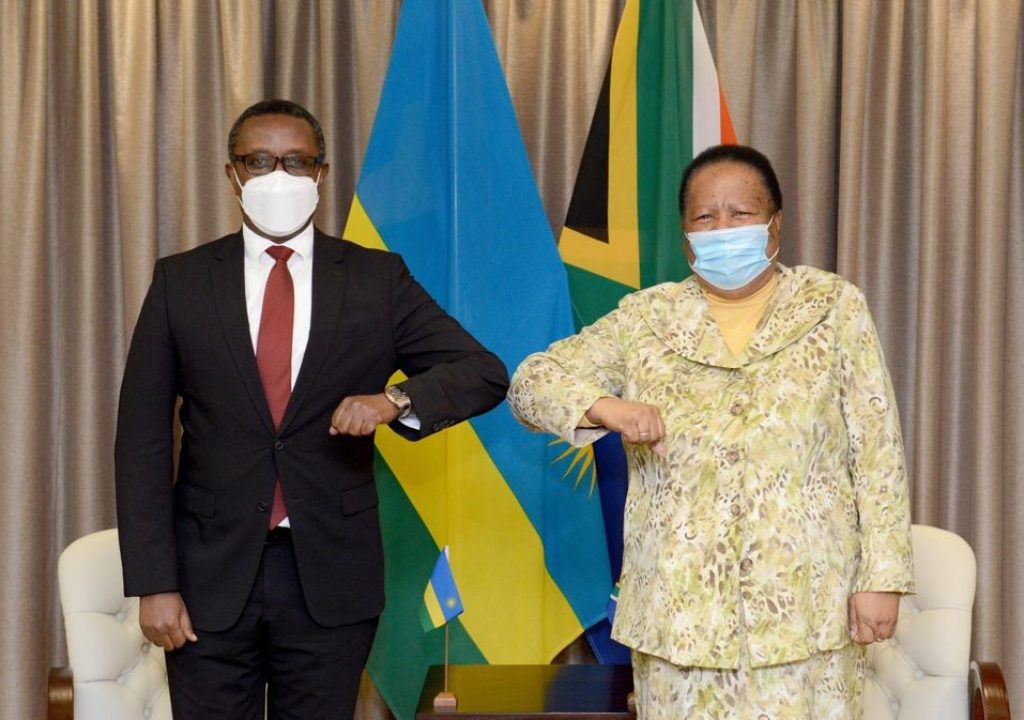 Dr. Biruta being welcomed in South Africa by his counterpart, Dr. Pandor. Both countries have agreed to open a new chapter in the relations of the two countries.

Rwanda and South Africa have vowed to put the past behind and open a new chapter in the relations of the two countries, agreeing to leave the ‘past behind’, after more than 10 years of diplomatic misunderstandings.

The Minister of Foreign Affairs and Cooperation, Dr Vincent Biruta, arrived in South Africa on Friday, where he held talks with his counterpart, Dr. Naledi Pandor, in Pretoria on the normalisation of ties between the two countries.

Dr. Biruta, who is on a diplomatic tour, arrived in South Africa from Tanzania, where he met President Samia Suluhu Hassan on Thursday, with a special message from President Paul Kagame.

In South Africa, Dr. Biruta and Dr. Pandor discussed with his South African counterpart are yet to be revealed but sources confirmed talks discussed how the two countries come move forward in terms of fully restoring diplomatic ties.

The dialogue between the two Ministers follows a meeting between President Paul Kagame and President Cyril Ramaphosa in Paris, France, on May 18, ahead of the Summit for the Financing of African Economies, during which they agreed to move towards normalising relations between the two countries.

Dr. Pandor said the meeting had been long overdue after the two Heads of States directed the Ministers to work out issues in February 2020 after they met in Addis Ababa but the thawing of relations was derailed by the COVID-19 outbreak. 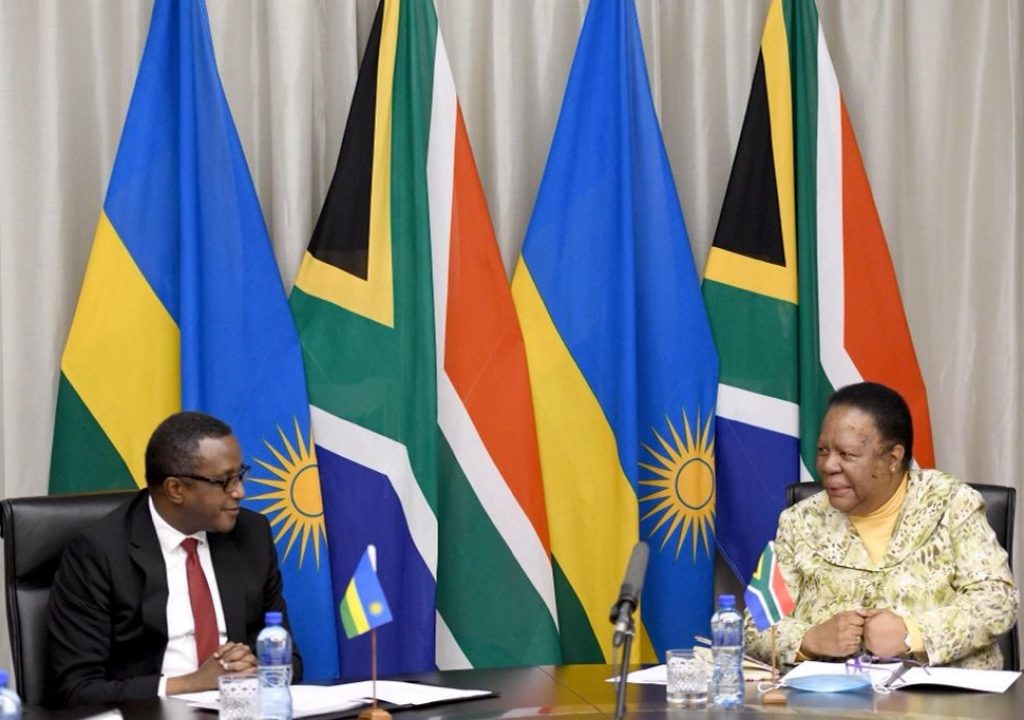 The two Ministers vowed to work on the challenges that have plagued relations between the two countries.

“Our meeting is long overdue, not only because we were instructed by our Presidents over a year ago to meet but also because our people of South Africa and Rwanda expect us to meet and strengthen cooperation between our two countries,”

“I believe that today marks the beginning of a process which will lead to the full restoration and normalization of diplomatic relations between our two countries,” Dr. Pandor said in her opening remarks.

She said that South African government firmly believes that strengthening and normalizing bilateral relations between South Africa and Rwanda would go a long way towards creating a basis for further collaboration in key development priority areas.

“Inadequacies in our diplomatic relations have held back that potential to unlock greater trade and investment opportunities, have limited government to government engagements in support of business activity, and have reduced essential collaboration in a regional and in multilateral platforms,” Dr. Pandor said.

She pointed out that the challenges the two countries have experienced over the past few years have not allowed them to effectively use instruments that had previously been agreed upon to facilitate very important relationship.

“For example, we’ve not really had active meetings of our Joint Commission for Cooperation, no implementation of our general cooperation agreement. The JCC I’m told last minute more than five years ago and I believe this doesn’t reflect well on a relationship,” the South African official said. 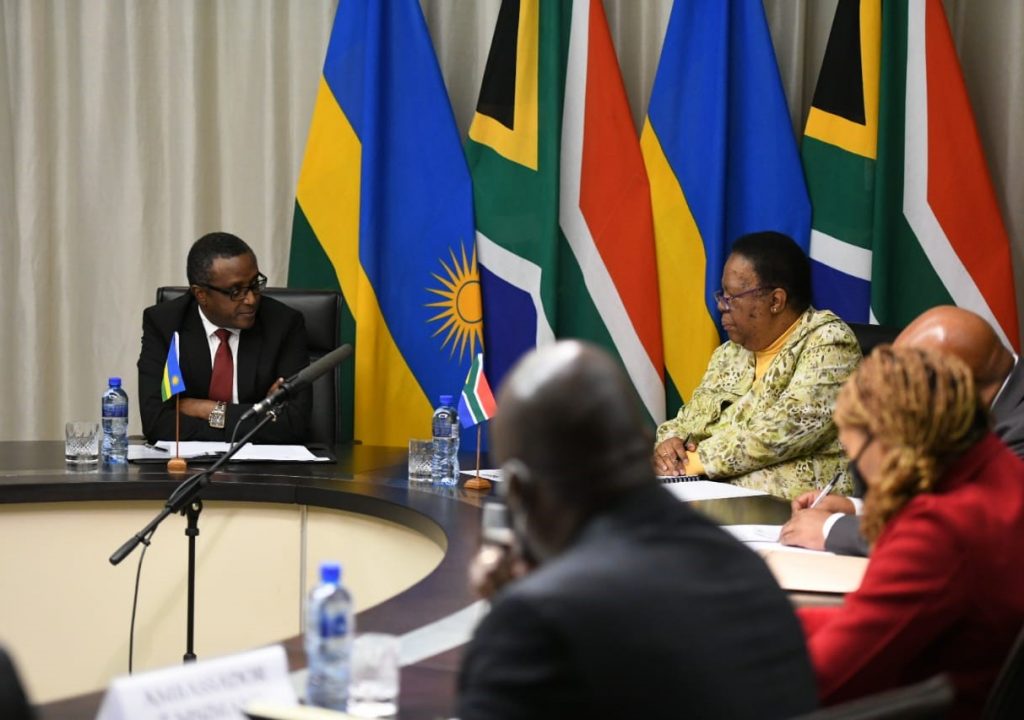 Dr. Pandor said that Dr. Biruta’s working visit is a ‘full opportunity’ for the two countries to commence a process of frank and solution driven engagement which will lead to the normalization of diplomatic relations.

She pointed out that the two countries had previously worked very well as South Africa and Rwanda, with respect to the Cuban medical brigade program, which had been aimed at rendering health services to the people of Rwanda.

“That project was a trilateral health project between South Africa, Cuba, and Rwanda which had begun in 2004. It of course came to a successful end but I believe it remains a model for our cooperation and is something that we should celebrate and seek to mirror even today,”

Pandor said the two countries had made many gains in the advancement of their cooperation in the field of education, which enabled them to benefit from the many graduates produced in the critical fields, such as commerce and medicine, among others.

She pointed out that before, when she was the Minister of Education, she had negotiated with her Rwandan counterpart on how South Africa can borrow mathematics teachers from Rwanda to help fill the gap in the country.

“I believe that the opportunities for cooperation between our two countries are immense that I could not over emphasize them but that they should guide our deliberations today,” Dr. Pandor said, highlighting other areas of cooperation.

Among other areas of cooperation, she mentioned the fight against COVID-19 and vaccine availability, trade and engagement at the global and continental level through different platforms.

The two officials agreed on areas of immediate action with a purpose of removing the huddles that had stood in the way, creating a basis for putting them behind.

In December 2020, South Africa named a new High Commissioner to Kigali, Mandisi Bongani Mabuto Mpahlwa, to replace George Twala, who had been recalled in December 2018.

However, South Africa is yet to reinstate visa services in Kigali, which were suspended in 2014.

Dr. Biruta said that it was his hope that the working visit is a step forward in the right direction and that the two countries will be able to agree on the way forward and put in place a Joint Permanent Commission to follow up on the issues with immediate effect.

He said that apart from government-to-government interactions, there is a need for business-to-business and people-to-people discussions because without involving the people, there is not much done.

Dr. Biruta said that the two countries will work together to find a joint solution to the challenges that have existed for more than a decade and put in place frameworks to address any other challenges in the future.

“A strong relationship is one which can help to deal with the challenges whenever they come up. That’s life. You cannot avoid challenges but if you have a sincere relationship, you can talk to each other and find ways to address challenges,” he said, emphasizing sincerity and a candid relationship.

He suggested that a technical team to come up with the roadmap should be established and given a deadline to come up with a report that will guide the process and ensure progress.

A Joint statement issued by the two Ministers indicated that Dr. Biruta and Dr. Pandor will be giving guidance to the team which will identify a spectrum of issues to tackle as the two countries look to open a new chapter in their bilateral relations.