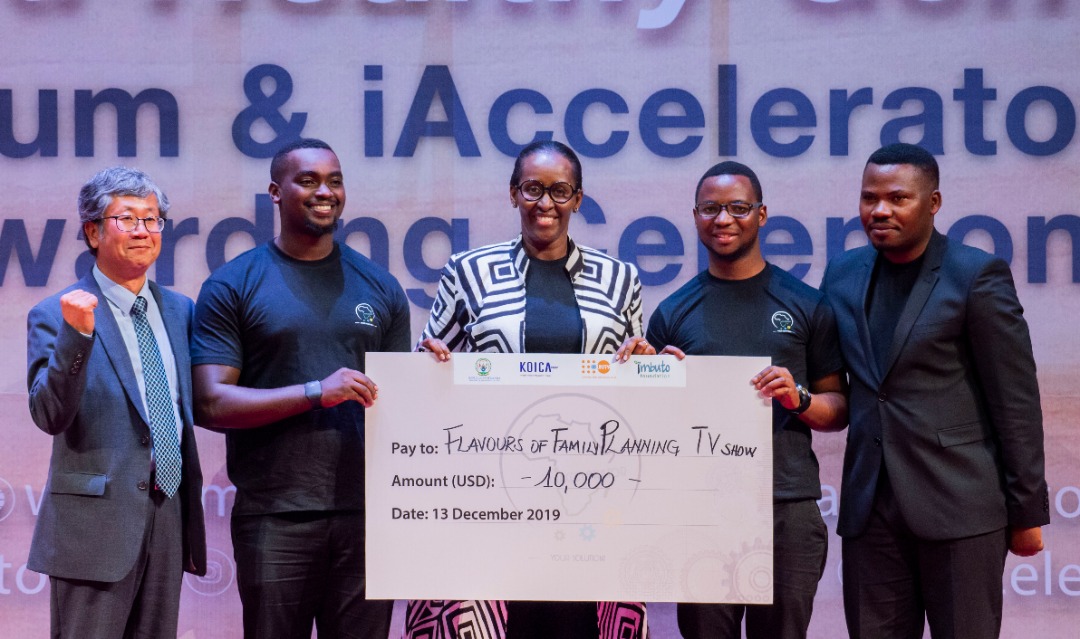 The First Lady Mrs Jeanette Kagame has assured the youth that Rwanda will not let their future dreams be ditched by drug abuse, no matter what.

Mrs Kagame was speaking at the youth forum and iaccelerator phase 2 awarding ceremony, where three top reproductive health innovations got $10,000 each.

The youth projects were awarded with intention to boost their projects into applicable reproductive health programmes that can be used to address the increasing concerns of teenage pregnancies by educating youth, parents and community.

The overall winner is a TV show dubbed ‘Kitchen Doctors’  in which two Kigali doctors use kitchen equipment to demonstrate male sexual reproductive cases, and how reproductive products like condoms have to be used by men to prevent unwanted pregnancies.

“The reason we came up with this TV show is because the angle of men as part of the cause of pregnancies is not tackled in society when it comes to addressing issues of teen pregnancies and sexual reproductive health issues in which only the women side is tackled, ” said Jean Berchmas Uwimana, one of the doctors in the project.

Current figures show that teenage pregnancies have increased from 4.1% in 2005 to 7.3% in 2015 and the Eestern province has the highest frequency of cases.

The second and third also presented ideas of using interactive games to engage youths with reproductive messages embedded in choices and responses made during the game.

Such innovations, Mrs Kagame said, were an effort on top of existing national policies and laws that respond to two current problems of teenage pregnancies and youth drug abuse especially among the youth.

She said that though Rwanda doesn’t have all facilities and programs to deal with drug addiction, the country will never give up on protecting it’s young ones.

“You are the best seeds of our country. As parents and nation, we cannot fail to give you a better and a successful life, but we need your contribution to problems that destroy our lives,” the First Lady said.

Mrs Kagame used this opportunity to rally donors for continued support towards achieving the above desire to support youth programs in preventing drug abuse and increase sexual reproductive health.

Fodé Ndiaye, the OneUN representative to Rwanda said that his office is committed to the cause of making youth the engine of development and investing in them to pilot new models to ensure raising a new generation at the core of development.

He said that Rwandan youth are blessed to have a caring and youth empowering government and shouldn’t take that for granted.

“Your projects will accelerate development in Rwanda but remember to be slow but sure to build society as leaders today not tomorrow,” Ndiaye told the youth in Kinyarwanda.