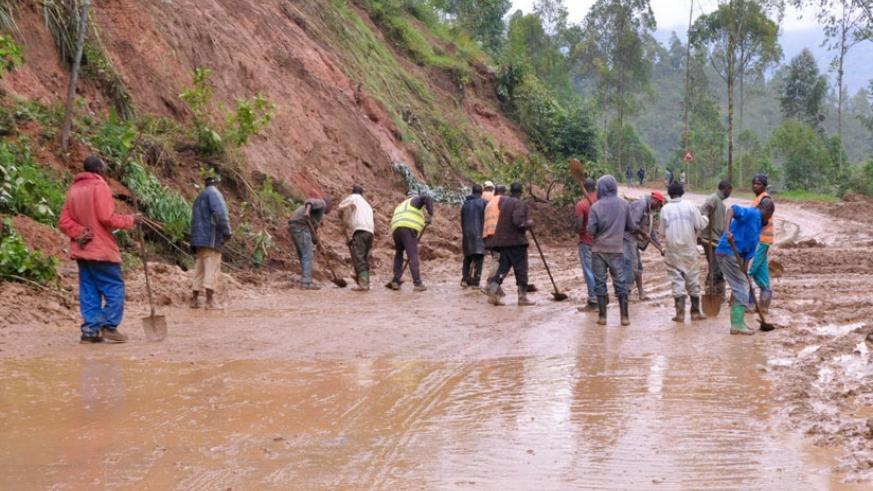 Anew survey conducted by Rwanda Water and Forestry Authority (RWFA) says about 45Million tones of top soil is washed away by soil erosion that occurs in several mountainous areas across the country, annually.

These figures were announced during hydrological meeting that convened environmental experts and researchers with the aim of fighting soil erosion, protect water bodies and other water catchments.

According to the research, fertile soil on mountains is washed away by running water due to mountain neighboring communities that carry out deforestation, mining, cultivate without using terraces, among other activities.

Phillip Kwitonda, water catchment manager at RWFA said that this is a serious problem since it reduces water volumes by closing water sources in rivers and affects soil fertility.

“This is why marshlands in Rwanda yield good harvest than hilly areas, most of fertile soil is washed away by running water up to the rivers or marshlands,” he said.

For the hill to retain fertile soil again it takes many years, about a hundred years, upon replanting trees where erosion took place, according to Kwitonda.

Going by figures from Ministry of agriculture, the estimation indicate that erosion of 14Million of fertile soil on mountains affects the ability to feed over 40,000 persons per year.

According to 2008 figures from Ministry of Agriculture, soil loses increased from 14Milion tones of soil to about 45Million.

According to the survey, Northern, Western and some parts of Sothern province are the most prone area of soil erosion. “These areas are mountains; some of them were deforested by famers, so the running water washes away most of the top soil that ends up in rivers including Sebeya, Nyabarongo and Mukungwa,” Kwitonda said.

In a bid to fight soil erosion, Rwanda targets to achieve covering 30% of the country with forest, currently the figure stand at 29.8%.

Of the 29.8% forest coverage, plantation forest occupies 17.9 while natural forest comprises of 11.9%.

Under the country’s national strategy for transformation, Rwanda aims to increase forest coverage to 30% (714,102ha) and sustain this level.

Christian Sekomo, an environmental lecturer and researcher at University of Rwanda said, “Planting bamboo trees on river banks to protect rivers is good, but it should be done along with planting trees on mountainous areas where erosion takes place.”

“Solving erosion vice is a long time activity that could take an estimation thirty years (30), upon putting much effort of planting trees.”