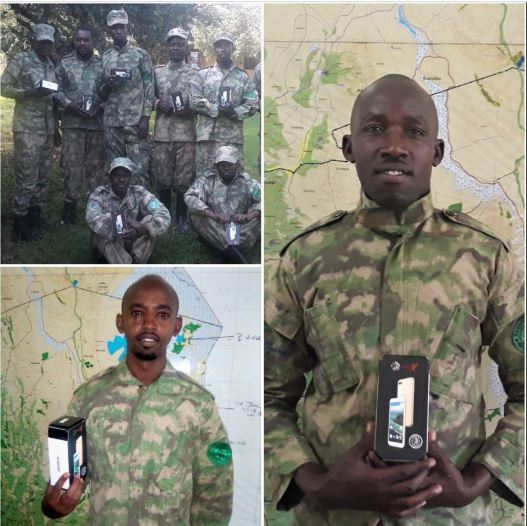 Rwanda Development Board (RDB) has become the first institution to honour its pledge of the connect Rwanda challenge by handing over 700 Smartphones to Park rangers.

The connect Rwanda challenge aims to see every household in Rwanda have a smartphone by the end of 2020.

The challenge was introduced in December last year during the 14th Rwanda Patriotic Front (RPF- Inkotanyi) gathering at Intare Conference Arena in Rusororo sector, Gasabo district in the capital Kigali.

During the gathering, President Paul Kagame asked the Minister of ICT & Innovation, Paula Ingabire, who was part of the cross generational panel discussing Rwanda’s 25 year journey what can be done to achieve Rwanda’s Vision 2050, to explain more on the Connect Rwanda Challenge.

Minister explained more about the challenge which attracted the President’s admiration.

He immediately announced he would pledge 1000 Smartphones, which he later upped to 1500 Smartphones to support the challenge.

Rwanda Development Board, other institutions as well as Kagame’s family poured in with more pledges.

Currently, more than 40,0000 Smartphones have been pledged by different individuals and institutions, according to officials at the Ministry of ICT & Innovation.

“Akagera N.Park is pleased to confirm that our rangers have received the @MaraPhones pledged by @RDBrwanda  through the #ConnectRwanda initiative. They are very thankful and say that it is going to improve their daily work mainly in communication and reporting,” Akagera National Park said in a tweet.

According to Minister Ingabire, there are about 2.8 million households in the country and the idea was that each of the households should at least have one smartphone because in essence most services will be going on line as it is seen with Irembo – a portal to all government services.