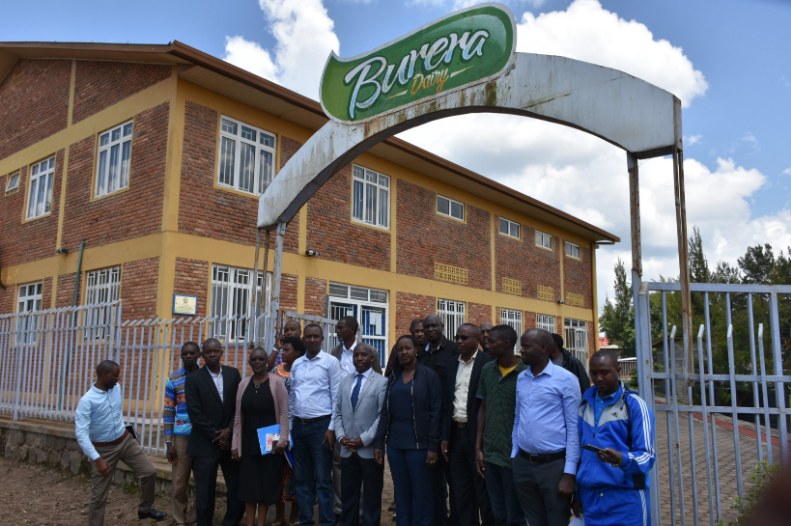 Rwanda government has finally sold off its shares amounting to 98.3% in the Burera dairy ending a five year of the factory management shortfalls.

According to a communiqué from Rwanda Industrial Development Agency (NIRDA) which was representing government’s interests in the factory, the plant was sold to African Solutions Private Ltd (Afrisol).

KT Press reliably learnt that the plant was sold at a tune of Rwf 270 million.

Afrisol is expected to boost the milk-processing industry while buying milk production from farmers, training them on best practices and providing animal feeds to farmers to boost productivity in both quality and quantity.

Officiating at the handover, Claire Mukeshimana, the acting Director-General of Rwanda Industrial Development Agency (NIRDA) said that it was a bold move to have the factory privatized as it would improve efficiency and productivity of the factory.

“We expect the new company to boost milk processing industry. It will surely create more jobs and improve lives of smallholder farmers who will sell milk production at better price,” she said.

The plant will have the daily capacity to process 10,000 liter of milk into various finished products such as soft and hard cheese, yogurt, long-life milk, butter, ice cream as well as fermented milk.

“Over the next five years, we intend to inject Rwf1.6 billion which will be split between capital expenditure to increase capacity and introduce new products into the market as well as working capital to secure raw materials and supporting farmers,” said Zimbabwean Ruvimbo Chikwava, the Chief Executive Officer of Afrisol.

While in citizen outreach in the Northern Province in May 2019, president Paul Kagame learnt that the factory was not functioning, following alleged poor machinery.

He asked several officials to explain what happened, in vain.

He learnt that malfunctioning issues started since inauguration of the dairy in 2016, but, since 2018, it failed to receive milk from the farmers.

The problem also involved poor standards of products including cheese and yogurt, which failed to qualify for a S mark, and thus, could not reach the market.

Former Director General of  NIRDA Pichette Sayinzoga told the President that in December 2018 the plant was closed “because it had failed to raise working capital.”

The president noted that there was poor follow up of the plant management.

Burera dairy never recovered from that shock until today when it was auctioned.