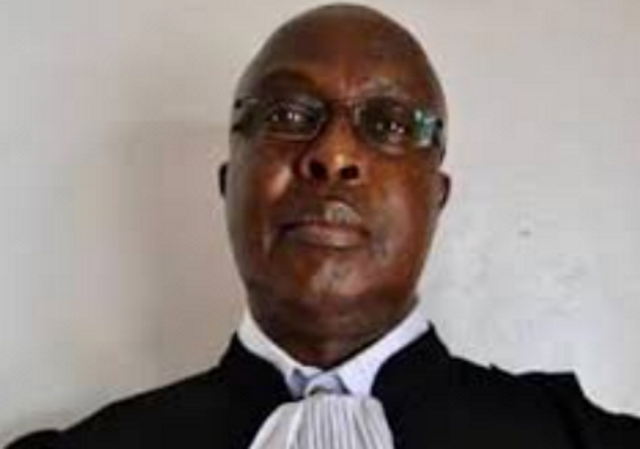 He is considered one of Rwanda’s brilliant legal minds and a man who served with integrity from start to finish, whose legacy will live longer in the record books of the country’s judiciary.

Pie Mugabo, who retired from judicial service in 2017 passed on last Sunday, with Chief Justice Faustin Ntezilyayo announcing the passing of a man credited for many contributions to the justice sector since the 1994 Genocide against the Tutsi.

Mugabo, who served as the Minister in charge of Social Welfare in the post-Genocide Transitional National Government, has passed away at King Faisal Hospital where he had been hospitalized for a heart-related condition according to the Liberal Party (PL) –a party he belonged to.

Mugabo had been hospitalized for some time at the referral hospital undergoing care until Sunday when he breathed his last. He was going to turn 58 on January 17.

“I am deeply saddened to announce the demise of Retired Judge Pie Mugabo. On behalf of the Judiciary, the High Council of the Judiciary and on my own behalf, I wish to express our heartfelt condolences to the family. May his soul Rest in Eternal Peace,” the Chief Justice announced through Twitter.

One of Mugabo’s daughters Sonia Mugabo, a renowned fashion designer took to Twitter to pay tribute to her father describing him as her ‘one and only’.

“My one and only. I love you, Papa. Rest with the Angels,” she tweeted, posting a photo of herself and the dad.

He graduated from the then National University of Rwanda (UNR) with a bachelor’s degree in law in 1978. He also underwent training in tax law in 1982 in Khartoum, Sudan, Adult education in 1987 and other legal courses in different parts of the world.

Apart from being a member of PL, which opposed the divisive politics of the then President Juvenal Habyarimana, he also served in different entities, including serving as a teacher in Kamonyi, a credit officer in Bank Populaire  Rwanda (BPR) before delving into the legal world.

He was an attorney and advisor in what was the national court of government assets before joining “Centre de Formation et de Recherches Coopératives – IWACU as a legal expert. He was also a state attorney before being appointed the Minister in charge of Social Welfare.

He occupied the docket from 1994 to 1997 after which he went into private legal practice. He also became the Managing Director of Tabarwanda before re-joining public service as the Secretary-General of the Supreme Court. He was also the president of the High Court Chamber of Nyanza before returning to the high court as a Judge, occupying the bend until his retirement in 2017.

On April 28, 2017, the Chief Justice is an order n° 027/2017 published in the official gazette awarded Mugabo with a medal for his outstanding service to the justice sector.

In the political arena, Mugabo was the first post-genocide President of PL, a party through which he and other members opposed the ethnic-based politics of the then government and preparations for the genocide.