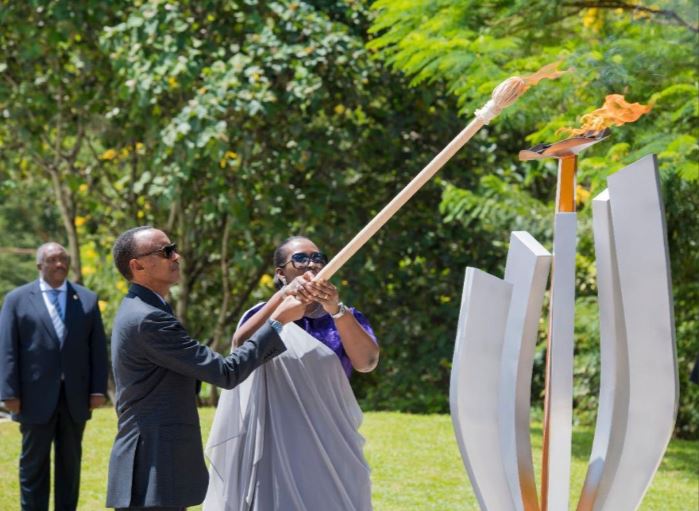 Every year, for the last twenty-six years, on the 7th April, Rwandans have gathered together to commemorate the 1994 genocide against Tutsi. The start of a week long commemorative events would normally start with the head of state and first lady, accompanied by several cabinet ministers, diplomats and other invited guests, lighting the flame of remembrance, and laying wreaths at Gisozi genocide memorial.

This year, remembrance falls in the time of a world pandemic, when, to contain the spread of infection, all public events have been halted, and people asked to stay at home, and venture out only when absolutely necessary. But even in these difficult times, Rwanda remembers.

As every other year, the head of state, with the first lady, led the solemn lighting of the flame, and laying of wreaths at Gisozi genocide memorial. Unlike every other year however, they were accompanied by only a handful of people, who in accordance with the physical distancing guidelines to fight Covid-19, kept the recommended distance between themselves.

Earlier, the President had addressed the nation, from Urugwiro village, as Rwanda’s state house is popularly known. As in every other year, the President thanked Rwandans, and those of Rwanda’s friends who stand with Rwanda, in remembering the over a million murdered. He commended Rwandans for their part in the fight against the Coronavirus pandemic, noting that it made this year’s remembrance particularly difficult.

“This year” he said, “remembrance will be especially hard, for survivors, and the nation as a whole, because we cannot come together for every one of us to comfort the other. It isn’t easy. As Rwandans we expect to come together at times like these…But, not even this unusual period will stop us from fulfilling our duty to remember and honour those we lost, and to enhearten the survivors. The only thing that has changed, is how we shall remember.”

“Today, we remember the atrocity we went through, and all that we lost, individually, and collectively as a nation. We will continue to instruct Rwandans today, and generations to come, what befell our nation, and the lessons we draw from it, lessons, we apply for the benefit of future generations. All that we have learnt from our history serves to strengthen our unity…”

At a time of a pandemic that threatens the world community, the President went on to commit Rwanda to play its part in the interconnected world, by sharing lessons from Rwanda’s history, and its culture.

It was a characteristically heartfelt, well judged message, recognising what both Rwanda, and the world needs at this challenging time. President Kagame understands only too well, how difficult not coming together for remembrance will be for Rwandans.

The remembrance walks, dubbed Walk to Remember, the night vigil at Amahoro stadium, are especially important for the young.

And, as he noted, they are particularly important for survivors, for whom every April brings memories that most of us cannot imagine, even in our worst nightmares. For the last twenty-six years, thousands have demonstrated their solidarity with the survivors by physically close to them.

But, as he also emphasised, Rwanda will remember. The remembrance walks trace the unimaginably harrowing journeys victims were forced to trudge, as they were abused, beaten, degraded in an attempt to utterly dehumanise them, hacked at with machetes, and if they survived all that, to be murdered at the nightmare journey’s end. Many

Rwandans have likened these journeys to Christ’s journey of the cross, and the final place of mass murder to Golgotha, where Christ was crucified. Incredibly, some did survive this hell.

This year, there will be no remembrance walks, but Rwanda will remember these journeys, how they ended, and will one way or another, be with those who survived them. Rwanda will celebrate their courage not only go on living, but unbelievably, to find forgiveness in their hearts.

Rwanda will remember not the over a million lives lost, but each life lost, over a million times. And it will not celebrate the courage of the survivors, but that of each survivor, as many times as there are survivors.

Survivors like Nelson Gashagaza remembers his sister Penzi, who at the point of death, from the murderers’machetes, in a heart breaking gesture of love, protectiveness and farewell, stretched out a hand to her brother. Children who had endured what no child should never even know, let alone suffer, growing up beyond their years. Rwanda remembers Penzi, and so many, too many others like her, and celebrates her brother’s survival, and others like him.

In nature, some birds will feign injury, commonly a broken wing, to lure predators away from a nest with its young. For a terrible few days that must have seemed like years, sleepless, neither food nor water, Yolande Mukagasana, wandered hither and thither, into every nook and cranny of her Nyamirambo neighbourhood, in the hope that the murderers hunting her, would follow her scent, diverting them away from her children.

Rwanda stands with her, in remembrance of 13 year old Nadine Nyinawase, 14 year old Sandrine Uwamahoro, 15 year old Alain Christian Murekezi, and celebrates the courage it takes for her to live with the knowledge of their torture before they were murdered.

Bleeding from machete wounds, eighteen year old Simba Rudakemwa, tried to hold on for three last wishes: to look after his little brother, ten years his junior, to at last see and greet members, or any member of the RPF Inkotanyi, who he knew were rushing to save not only him, but to secure the entire nation, and of course life itself. In the end, the blows dealt by the murderers were too severe, and he would not live. But he did manage to hold on to see two of his last wishes fulfilled.

He would shake the hand of the Inkotanyi come to rescue him, and holding his younger brother’s hand, he would tell him to be strong, brave, and to look after himself. He would not be there to perform an older brother’s duty to an orphaned younger brother, but at least, he knew now, that his little brother would live, and grow to adulthood.

Rwanda remembers with Serge Gasore, and celebrates his life. Twenty-six years later, the then little eight year old, now runs the Serge Gasore Foundation, established to educate the most vulnerable children, and holistically support their communities too.

And Rwanda remembers with Tharcisse Sinzi, a martial arts enthusiast, who twenty-six years later, remains angry that he managed to save only a hundred or so people from the machetes, bullets and grenades, convinced that he could have saved so many more. Armed only with rocks, sticks and anything else they could find, Sinzi organised a defence that held off the Interahamwe militias, until they called in reinforcements from the military.

It is then that even he had to accept there could be no defence with sticks and rocks, against bullets and bombs. He organised the best escape he could, but can never shake off the feeling that he could have saved more. He has been made Umurinzi wigihango, one of Rwanda’s highest civilian honours.

These individual stories, over a million times, Rwanda remembers, commemorates and celebrates. Life’s longing for itself, as the poet Khalil Gibran reminds us.

The National Commission for the Fight against Genenocide (CNLG), one of the bodies that organises remembrance events, issued guidelines on commemorating from home. Radio and television broadcasts linked people at home, especially at the start of remembrance week, on Tuesday the 7th.