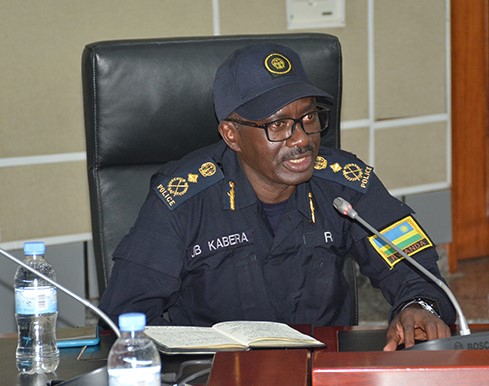 Rwanda National Police (RNP) has outlined tough measures against errant members of the public and motorists in particular, who continue to breach directives meant to contain COVID-19, thus derailing national efforts against the pandemic.

The new measures, according to RNP spokesperson, CP John Bosco Kabera, include digital recording of identities of every violator to inform “serious actions” in case of recidivism.

“As part of the efforts to implement the directives, compliance and easy identification of errant violators, RNP has started a new digital system to keep detailed data on everyone, including motorists and pedestrians, who breach the directives to inform severe actions when you are caught again,” CP Kabera said.

The stringent measures also include reporting the violators as well as those who lie, to their respective employers for further penalties.

This comes after an assessment on the level of compliance with the directives in the last four months, which indicates serious violations related to compulsory wearing of facemask when in public, curfew and operating services that are still closed or unauthorised like bars, prayers as well as prohibited movements and gatherings.

“These violations increase risks of COVID-19 infections after the lockdown was lifted and movements beyond regions permitted,” CP Kabera said.

He added: “Residents of Rwanda should understand that as the government continues to open different sectors of the economy including businesses and tourism as well as religious services; it is not time to lean back, relax and loosen the recommended safety and prevention measures but rather a step to further improve livelihoods of the people in line with the country’s development but in maximum compliance with the directives.”

He observed that these violations, which also include home visits, unnecessary and prohibited home events, continue to fuel further COVID-19 infections in the country.

“Rwanda National Police strongly warns against such unlawful, inappropriate, and risky behaviours and actions, which lead to putting some sectors, cells and villages under lockdown and can lead the country back into total lockdown; no one wishes this to happen again,” CP Kabera emphasized.

RNP recently published a report of close to 500 errant motorists, who violated the curfew and went on to disregard instructions given to them by police officers enforcing the curfew. Instead of parking in the allocated lots and going to centres where they were directed, they drove or rode away.

Of these published motorists, only 155 had voluntarily reported to Police by Thursday, July 23.

“Many other motorists have not reported as per the recent Police notice. We wish to remind every motorist who will not come forward by the end of this Friday July 24, that Police will take the next step to locate and arrest them,” CP Kabera warned.

The spokesperson further cautioned against moving without identifications adding that “no one will be released until their full identities including where they reside and what they do, are known and recorded.”

On churches and mosques that were authorised to resume their religious services, CP Kabera reminded them that the “responsibility to prevent the spread of Coronavirus has equally been placed in their hands by maximum compliance with the set guidelines, without being forced, for the safety of their followers and the country in general.”

He took time to thank the majority of people in Rwanda, who have embraced the culture of #NtabeAriNjye by operating within the limits of the directives and facilitating the Police in enforcement through information sharing on violators.

“Respecting all the directives and specific guidelines for particular institutions and areas is not optional; it’s the only thing to do.

If you think that you can make the Police to give up, then you are stressing yourself; Police operates 24-hours-all-days to ensure the safety of all people in Rwanda and their property, and to ensure that all the directives are respected to the maximum.”

“Wearing a facemask is not a one-time thing; it’s a must every time you leave your home; washing hands should be a regular hygiene and safety practice using soap and clean water; social distancing should be a culture; whatever you do, make sure the curfew finds you home.”

To win the fight against the pandemic, which has no antidote at the moment, he said, respecting the government directives and other recommended hygiene and safety practices is the only remedy.