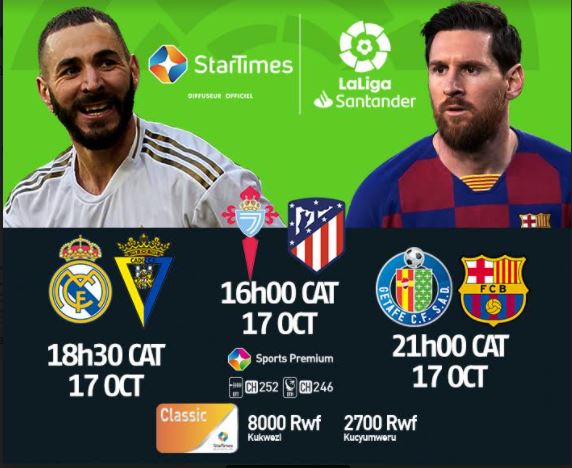 Barcelona and Real Madrid have been dominating La Liga for quite some time and their early form suggests that they will continue doing so this season.

Like Real, Barcelona have yet to lose a game, though they have played one less than their big rivals. They currently sit in fifth on seven points.

Both Real and Barcelona defend their unbeaten record on Saturday, with the defending champions from the capital seemingly having the easier task as they take on newly promoted Cadiz at home, while Barcelona are away in the Madrid municipality for their match against Getafe.

Rather surprisingly Real Madrid, who are known to go in pursuit of big-name and expensive Galácticos, have sat back during this transfer window and signed no new players, though there were some returnees from loans, including the highly rated teenager Martin Ödegaard.

Coach Zinedine Zidane is said to have set his sights on making a big splash in 2021 and has identified PSG star Kylian Mbappe and 17-year-old Rennes wunderkind Eduardo Camavinga as potential signings.

Real can, however, expect plenty of competition in their pursuit of the young midfielder, who is the latest in the never-ending stream of talented players coming out of France.

Against Cadiz, Zidane will once again be without Eden Hazard, who is labouring under a muscle injury that kept him out of Belgium’s matches during the international break.

The influential midfielder, who has struggled with injuries since his transfer to Real from Chelsea, has received some support from team-mate Luka Modric.

“’It is not a comfortable situation. He has come to show that he is one of the best and he will show it this year. When he was well he showed that he was going to be important, but the injuries stopped him. We need him,” the Croatian told journalists.

Unlike Real, Barcelona spent over 100 million dollars to bring Miralem Pjanic, Trincão and Sergiño Dest to the club, though they received more than that through the sale of a number of players including Arthur and Nélson Semedo, who joined Juventus and Wolves respectively.

Barcelona fans are now hoping that the furore around Lionel Messi’s request to leave the club will be a thing soon forgotten as new coach Ronald Koeman steers the club into calmer – and more successful – waters.

A victory in Getafe on Saturday will be another step towards that goal.

Football fans throughout Africa will have the chance to see whether Barcelona and Real Madrid can maintain their unbeaten record as the games are being shown on the StarTimes football channels.

La Liga matches will be broadcast live throughout Africa on StarTimes channels. Make sure you sign up to watch La Liga games, where every matchday counts.