The impending trial of terror suspect Paul Rusesabagina, who is facing 13 terrorism-related charges has elicited a lot of debate, with sections of western media and rights groups claiming that the 66-year old will not get a fair hearing.

Records however show that Rusesabagina is not the first high profile to be brought to Rwanda to face the law and answer the suspected crimes.

Below are 15 of some of the high-profile fugitive transfers to Rwanda that dominated the headlines following landmark decisions by courts to send the suspects to Rwanda. For some, it took years of protracted court battles but eventually they were extradited.

Léon Mugesera (Canada): On January 23rd January 2012, Mugesera was deported from Canada to Rwanda after a protracted legal battle that lasted 16 years.

Mugesera, who would later be charged with multiple counts of genocide related crimes, including incitement to commit Genocide, inciting ethnic hatred and persecution as a crime against humanity, had the most highly publicized legal battle, fighting extradition to Rwanda.

His extradition was seen as a major milestone for Rwanda’s efforts to build capacity and trust in the justice system, to allow countries or other international bodies to send suspects to Rwanda to answer for their crimes. His charges stem from a 1992 hate speech, calling for the extermination of the Tutsi.

After a lengthy court battle, the former University Lecturer was handed a life sentence in April, 2016 after he was found guilty of the crimes. He appealed the sentence.

On Friday, September 25, the Court of Appeal upheld the life sentence for Mugesera, 70, after it said that he was guilty of inciting ethnic hatred and persecution as a crime against humanity, among other crimes.

Jean Uwikindi (ICTR): The transfer of Pastor Jean Uwikindi to Rwanda on April 19, 2012, was a major precedent in the referral of criminal cases to Rwanda for trial.

According to Jean Bosco Siboyintore, the head of the Genocide Fugitive Tracking Unit (GFTU), Uwinkindi’s referral to Rwanda in 2011 was a turning point because it came after several years of submissions in the UN tribunal, with rights watchdog blocking attempts to transfer fugitives to Rwanda.

In 2010, Rwanda went to Arusha to prove that the issues that were raised in 2008/09 were addressed. On June 28, 2010, the ICTR Referral Chamber ruled in favour of sending the fugitives to Rwanda.

The transfer would however delay as Uwikindi petitioned the ICTR for a stay of his transfer from the Arusha-based tribunal. His appeal was overruled by the Appeals Chamber, upholding the decision to transfer him to Rwanda.

Uwinkindi, a former Pastor of the Pentecostal Church in Kanzenze, Bugesera in the former Kigali-Rural prefecture, was the first suspect to be transferred from the ICTR to Rwanda. He was accused of unleashing killers on thousands of Tutsi refugees, including members of his church, during the 1994 Genocide against the Tutsi.

On December 31, 2015, the High Court sentenced Jean Uwinkindi, 69, to life in prison for genocide and crimes against humanity.

Munyagishari, who was the former head of the then ruling party National Republican Movement for Democracy and Development (MRND), in the former Gisenyi prefecture, was arrested in May 2011 in Democratic Republic of Congo (DRC).

He was wanted by the UN court for genocide crimes. ICTR ruled in favour of his transfer on June 6, 2012 and confirmed the same decision on appeal on May 3 same year.

On April 20, 2017, Munyagishari, 61, was sentence to life imprisonment for participating in the Genocide against the Tutsi, and killing as a crime against humanity. He was cleared of rape as the Prosecution failed to present convincing evidence.

Ladislas Ntaganzwa (ICTR): Ntaganzwa was one of 9 ICTR fugitives wanted for trial for crimes committed during the 1994 Genocide against the Tutsi. He was transferred on March 20, 2016, from DRC, where he was arrested in 2015, to Rwanda for trial, pursuant to an international warrant of arrest issued by the United Nations Mechanism for International Criminal Tribunals (MICT).

Ntaganzwa was a former mayor of Nyakizu Commune in the Butare Prefecture. He was indicted in 1996 by the ICTR for genocide and crimes against humanity for the massacres of thousands of Tutsis at various locations, including Cyahinda Parish and Gasasa Hill.

On May 28, 2020, the High Court Chamber for International Crimes sitting in Nyanza sentenced Ntaganzwa to life in prison for crimes he committed during the 1994 Genocide against the Tutsi. He was charged with a number of crimes including genocide, incitement to commit genocide, murder, and rape.

Charles Bandora (Norway): On March 10, 2013, genocide suspect Charles Bandora arrived in Rwanda from Norway after losing a battle against extradition. He was the first Genocide fugitive to be extradited to Rwanda from a European country.

His extradition was a landmark in the sense that Europe had the highest number of wanted fugitives, mainly genocide suspects. His deportation followed an October 2011 ruling by the European Court of Human Rights (EcHR), which set the jurisprudence in the case of Ahorugeze v Sweden, that genocide suspects can be extradited to Rwanda for trial.

Bandora, a former businessman Bandora, 61, was accused of organising and participating in the Genocide against the Tutsi, particularly the killings of hundreds who had taken refuge at Ruhuha Church in the former Ngenda Commune, currently in Bugesera district.

The former business man who ran businesses in Malawi before fleeing to Europe appealed the sentence but it was upheld by the Supreme Court on March 22, 2019.

The deportation of the duo to Rwanda to answer for their crimes sent chills down the spines of dozens of genocide suspects in North America who were exploiting the law to evade justice under the guise of not getting a free and fair trial back home.

Coincidentally, both had been sentenced to 19 years by Gacaca Courts at different times, Mukeshimana, in her native home of Butare, Huye district, where she proceeded to serve her sentence.

Mudahinyuka, who was deported from Chicago went on to serve his 19-year sentence which he had been handed by the Gacaca Court of Nyakabanda, Kigali in 2008.

The deportation of the duo buoyed the confidence of the international community in Rwandan courts, paving way for more deportations.

Leopold Munyakazi (USA): After the duo, the U.S also went ahead to deport academic Dr. Leopold Munyakazi to Rwanda to face alleged genocide crimes, after a much-publicized protracted legal battle on his asylum which he lost.

In July 2017, Munyakazi was sentence to life by Muhanga Intermediate Court on genocide-related charges but he appealed the conviction.

A year later, in July 2018, Dr. Munyakazi was cleared of all but one charge related to Genocide by the High Court Specialised Chamber for international crimes sitting in Nyanza.

The 69-year old, a former head of the national trade union, CESTRAR, and university lecturer, was sentenced to 9 years in prison after he was found guilty of Genocide revisionism.

He was cleared on other charges including participating in the 1994 Genocide against the Tutsi, complicity in the Genocide, conspiracy to commit genocide, as well as extermination and murder as crimes against humanity.

The decision was premised on the fact that there were contradictions in witness accounts pinning him of playing a direct role in the Genocide against the Tutsi.

Jean Twagiramungu (Germany): On August 18, 2017, Twagiramungu, a genocide fugitive was extradited from Germany, to face charges of mastermind genocide crimes in the former Gikongoro Prefecture, in the current Southern Province.

Twagiramungu had been arrested in the German city of Frankfurt, in 2015, where he battled extradition in different courts until he exhausted all legal means and was sent home to Rwanda. 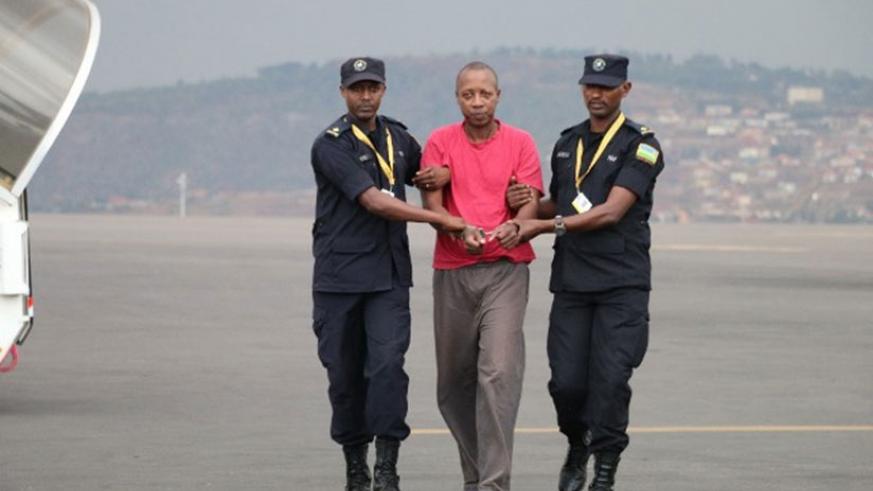 Emmanuel Mbarushimana (Denmark): In July 2014, Denmark deported genocide suspect Emmanuel Mbarushimana to Rwanda, in yet another extradition by a European country. Mbarushimana faced charges of complicity in the genocide and was sentenced to life by the Special Chamber for International Crimes of the High Court at the end of December 2017.

Mbarushimana appealed the sentence, his trial is still ongoing.

The trials of the trio are still ongoing.