In the wake of the Government decision to intensify measures against the New Coronavirus, the Minister of Health, Dr Daniel Ngamije says a lockdown is still an option if cases of COVID-19 continue to increase, going by the current trend. The Minister of Health made the revelation on Wednesday during a press conference to expound further on the Monday cabinet decisions.

“The lockdown is still an option. As you can see, we started with the reduction of the curfew duration, from 10pm to 9pm and then later it will be from 8pm to 4am. But if we don’t comply with these measures and if the incidences are still increasing,” Dr Ngamije said, adding that;

“If clearly it appears that the lockdown is the best solution remaining to contain this pandemic, it will be considered by competent authorities and they will decide,” Dr Ngamije said.

Minister Ngamije warned Rwandans, who he said have been found to have become complacent, leading to the recent spike in new cases, against violating COVID-19 measures, otherwise the country would go back to the same situation 9 months ago, with the government taking even much tougher measures.

As of  Wednesday, 6, 954 people had been diagnosed with the New Coronavirus in Rwanda since March. Of those, 6,057 have been discharged from the hospital after testing negative while 840 are still being cared for, six of whom are in critical condition. Rwanda has so far registered 57 deaths. 122 new cases were recorded on Wednesday.

Dr. Ngamije said the virus has evolved over the last few weeks where a high rate of infections has been registered, with at least 60 new people getting infected every day, the number closing in to close to 100 or more over the last few days.

Dr Ngamije warned the public against circulating or listening to disinformation that COVID-19 is not as deadly as they or that the situation is not that bad.

“We want to tell the public that COVID-19 is still around and it is as deadly as ever. We have seen its devastating impact. It kills people in the most painful of ways, damaging their body organs and affecting blood circulation,”

“We see people die in a helpless way, where their body organs fail, they can’t breathe properly. Health workers do all they can to support these individuals, putting them on ventilators but unfortunately some have to succumb to the virus in the most painful of ways,” Dr Ngamije said, adding that currently there are six patients in critical condition.

Dr Ngamije said that as the country reopened key services over the past six months or so, people became more complacent and stopped following the measures put in place by the government, which include observing physical distancing and practicing standard hygiene measures.

He said that the new cases are mostly manifesting in markets and other public places like bus parks, schools, prison facilities and other places with many people at the same time.

The Minister of Local Government, Prof. Anastase Shyaka, said that a survey across the country showed that more Rwandans have become lax in observing the measures and fear law enforcement and fines more than they fear the pandemic itself.

He pointed out that the revised measures are aimed at closing the gap that has been lingering for days, where people were becoming more complacent especially in markets, bus parks and other public places, something he said was confirmed by day one of enforcement of the new measures.

“Following the enforcement of new cabinet directives, the first day proved that the level of adherence among Rwandans has declined. Last night, across the country 85 bars were found to be operating illegally, with close to 300 people inside the bars,”

“Over 3, 000 were arrested for not wearing masks correctly, while another 1, 979 failed to practice physical distancing. A total of 2,538 people violated curfew time, while 128 vehicles were apprehended for the same reason,” Prof. Shyaka pointed out.

He pointed out that the revised measures, which banned all social gatherings including weddings and other parties, are not meant to deprive people of their rights, but rather should be looked at in the sense that if directives are adhered to as much as possible, the country can go back to normal as soon as possible, rather than looking at them as an inconvenience.

Prof. Shyaka urged people to stop evading the measures to engage in activities that can be seen as illegal, pointing out that Rwanda National Police and local leaders will be on the lookout for those violating measures, defending government fines and penalties related to COVID-19.

“The intention is not to punish or fine people who violate COVID-19 measures. The fines and penalties are aimed at reminding people of their responsibility. The fines were not set to get money out of citizens but they are rather a reminder of what we are all required to do,”

“Once you or your business is fined or penalised, you understand the importance of these measures. Next time you pay attention to them. Rather than getting concerned with the fines and penalties, we should be concerned with not adhering to the measures,” Prof. Shyaka said, pointing out that instead of fearing law enforcement, people should instead fear the New Coronavirus and it will be easier for them.

This was reiterated by the RNP Spokesperson CP John Bosco Kabera said that RNP will continue to execute its mandate of enforcing the measures but warned that the job of police officers is not to chase or play hide and seek with people.

“We urge members of the public to focus on observing the measures instead of thinking of ways to dodge Police, especially in the festive days. Don’t host a party if you know it is not allowed,”

“We can assure you that your security will be guaranteed during the festive season as it has been in other days. It is our job to ensure your security but you also have a duty to observe the measures,” CP Kabera said, adding that if everyone played their role and took responsibility, the situation can be easily contained.

He urged the public to prioritise health and life over festivities such as Christmas and the New Year, which will always come around annually.

“There will be many more Christmases and New Years to celebrate. You can afford to forego the festivities this year and celebrate in your homes. The holidays will always be there but first we have to do away with the pandemic,” CP Kabera said.

The Minister of Trade and Industry, Soraya Hakuziyaremye gave an update on the state of trade in the country, pointing out the responsibility of businesses in ensuring that measures are adhered to, by doing the right thing in business premises, following the spike in numbers over the last two weeks.

Minister Hakuziyaremye said that the new measures on meetings and conferences, which require venues to have 30 percent occupancy and a mandatory COVID-19 test for participants are aimed at minimising the risk of infections during such gatherings.

“Trade and tourism activities will carry on but in observance of COVID-19 preventive measures. Hotels can still accept meetings and clients but they also have to adhere to the directives. We are doing an assessment to see how businesses and markets are putting this into practices,”

“Our wish is to see businesses continuing to operate but in a cautious manner. We are checking in markets to see if handwashing facilities are working, sanitizers are available or if people are wearing their masks properly and observing social distancing,” Hakuziyaremye said, emphasizing fining businesses which are violating these measures.

She said that so far at least 60 businesses have been shut down in the City of Kigali for the same reason. Transportation and travel services will continue to operate, while the Rwanda International Trade Fair will also go on but with strict preventive measures.

Minister Hakuziyaremye said that 381 exhibitors, including 71 from different countries in Africa and beyond are participating in the trade fair. Questions have been raised as to why the expo continued despite all other activities bringing people together being put on hold.

The Minister of Sports Aurore Mimosa Munyangaju briefed the media on the halting of some sports activities, including the Rwanda Premier League which was suspended, after it was discovered that teams and those in charge had failed to respect COVID-19 protocols.

Minister Munyangaju said that efforts were underway to ensure that teams which had international engagements as well as continental qualifiers can go ahead in compliance with COVID-19 measures.

On the RPL, the Sports Minister said there were challenges where some clubs failed to adhere to requirements, while in another case fake COVID-19 certificates were presented and, on another game, teams played before results could return and it turned out that some players were infected.

“We are looking at a possibility of having all international football matches played in compliance with COVID-19 protocols, including the AS Kigali game and the national team preparations for CHAN,”

“CECAFA-U17 games will also continue in Rubavu but we will ensure that players and officials are tested beforehand and deploy all protective measures,” Minister Munyangaju said, adding that preparations of next year’s Tour de Rwanda remain underway.

She however said that plans are being discussed to see how the crowd pulling international cycling race can take place in a safe environment, without putting people at risk of COVID-19. 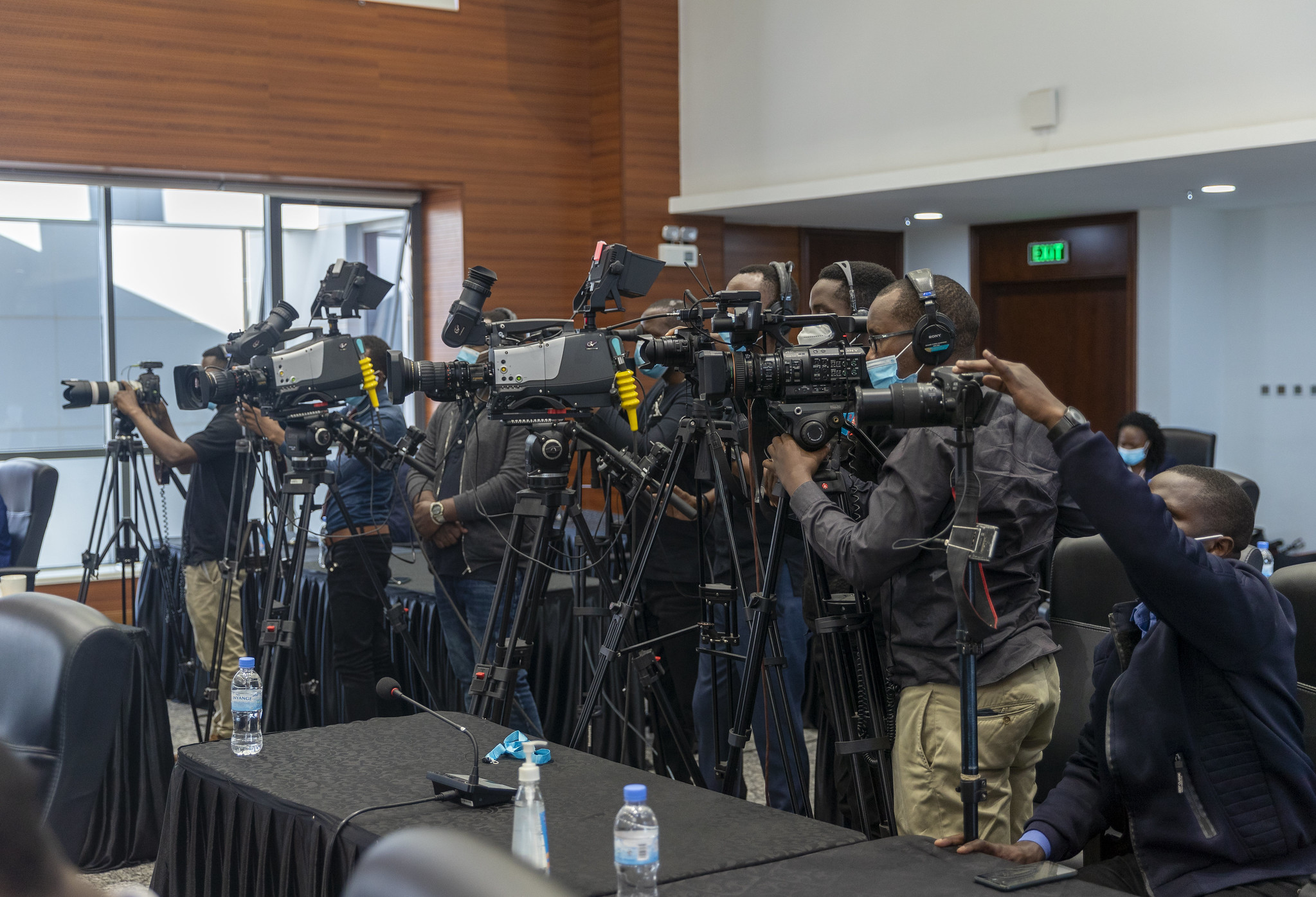 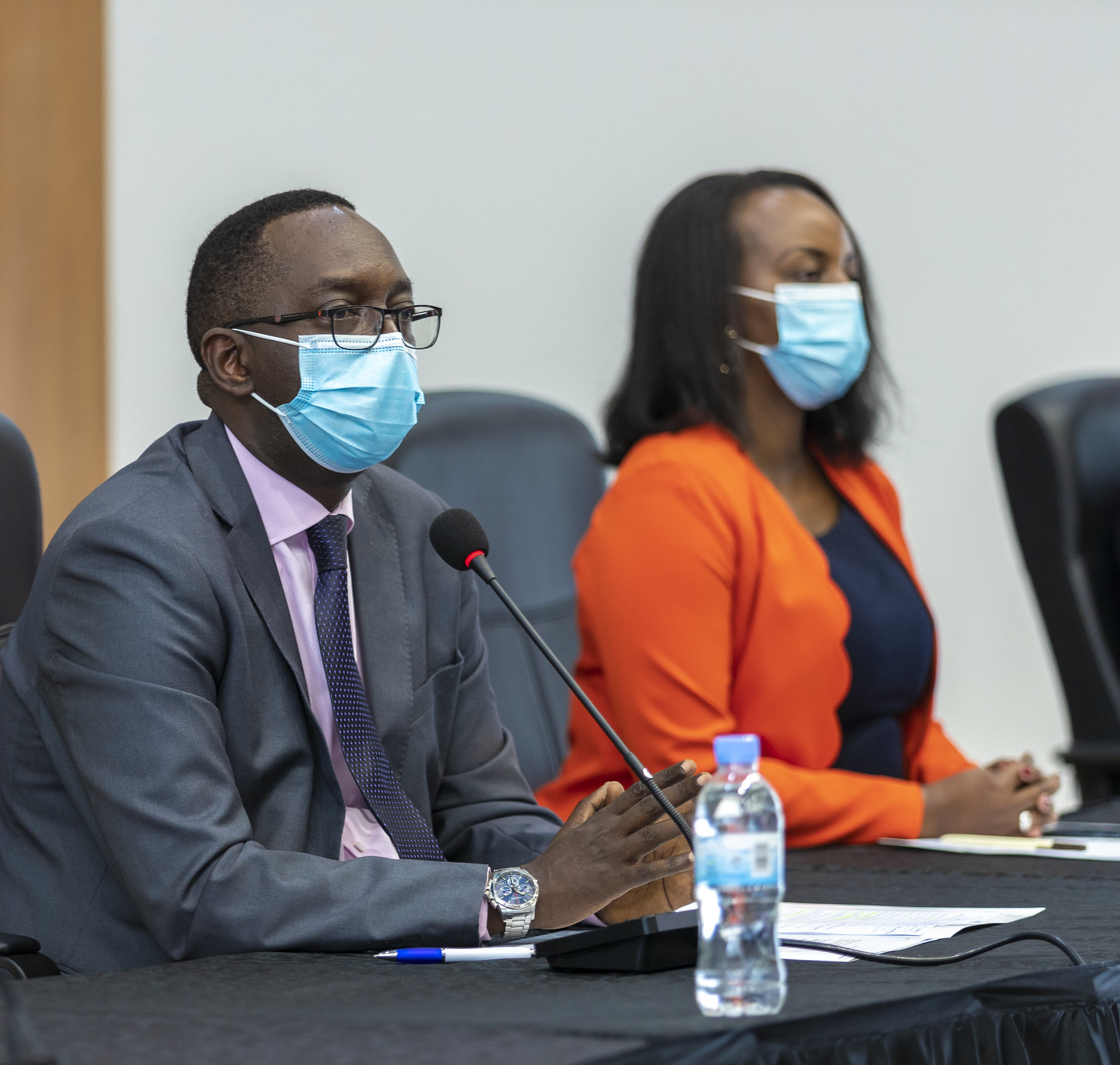 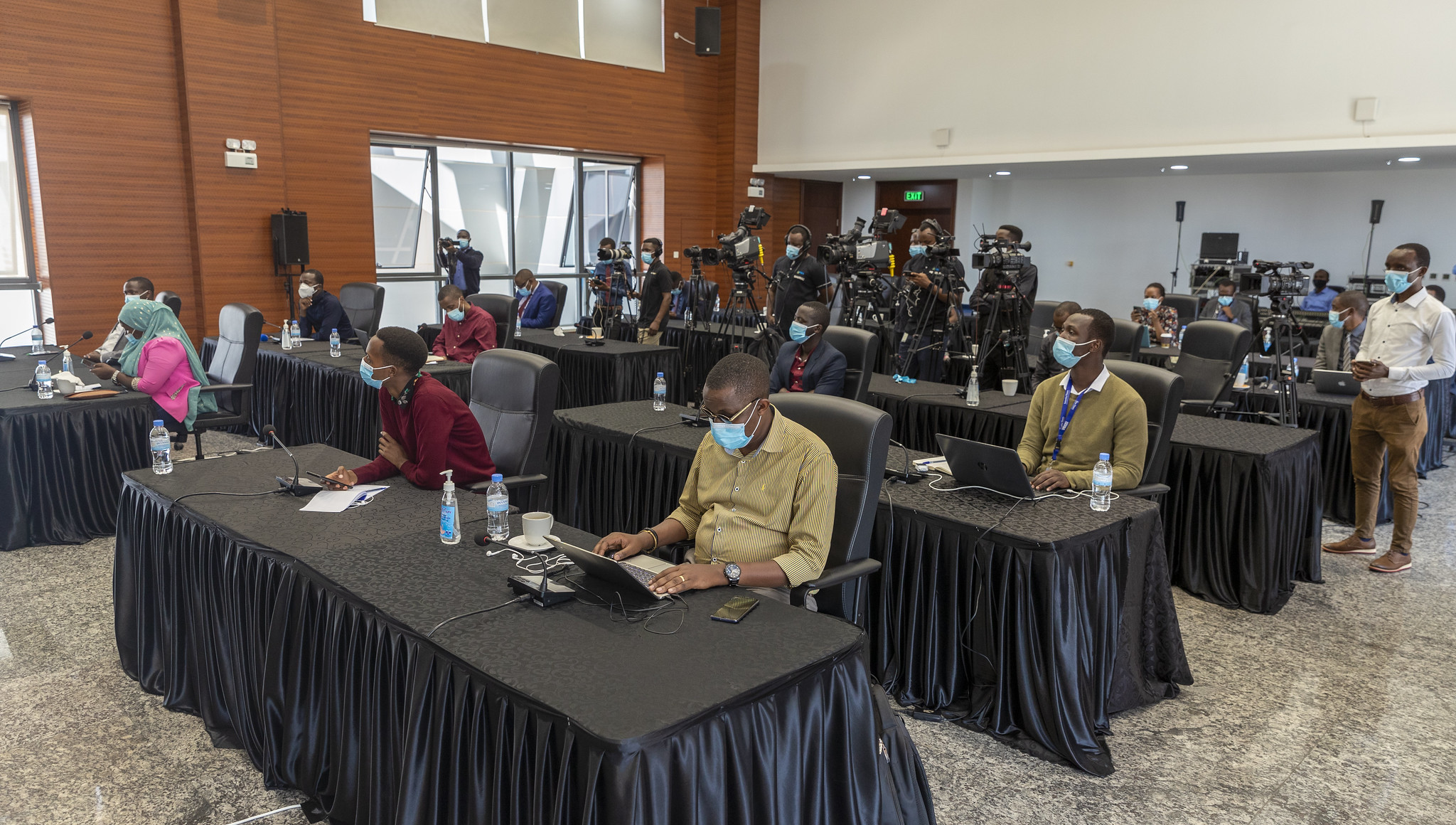 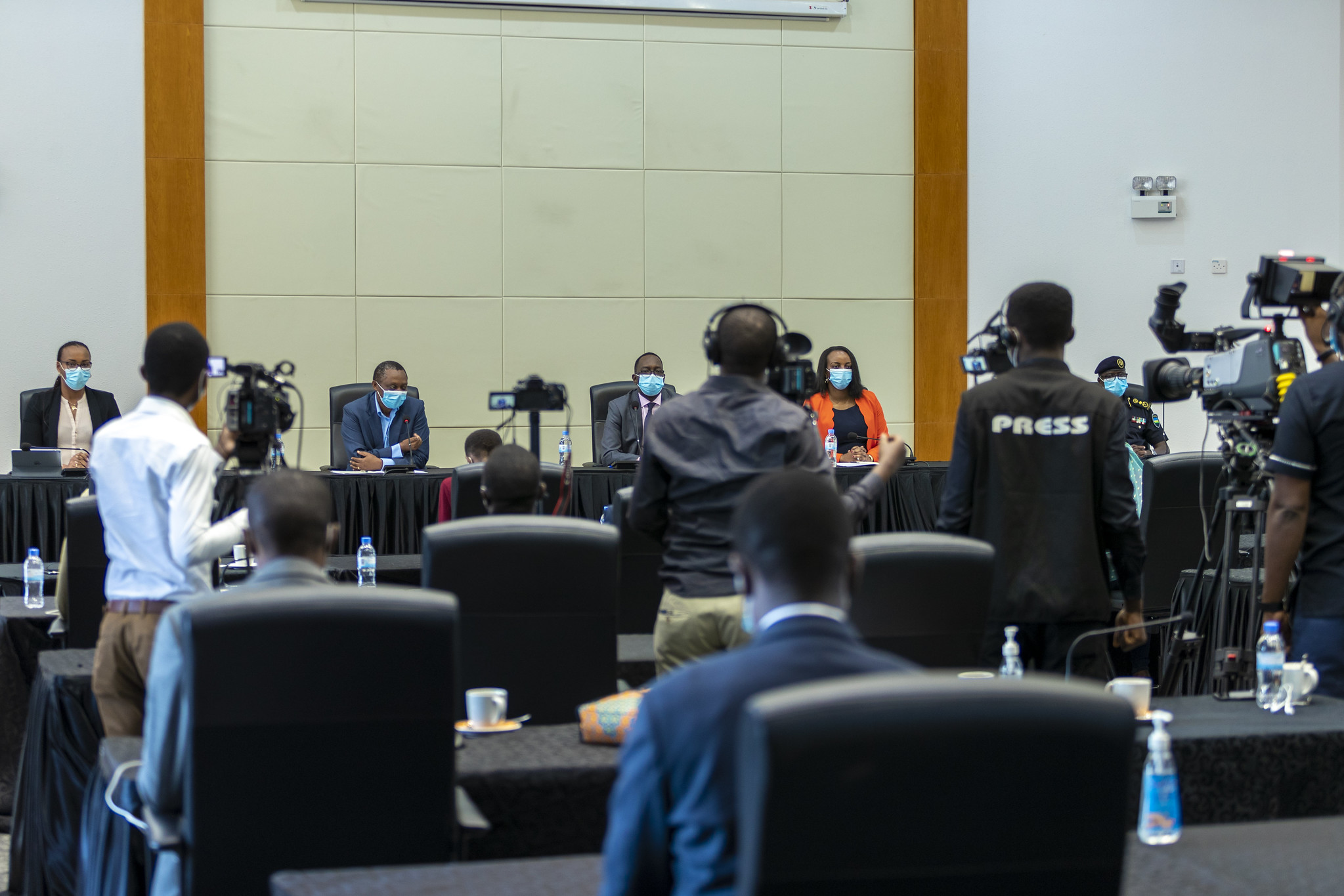