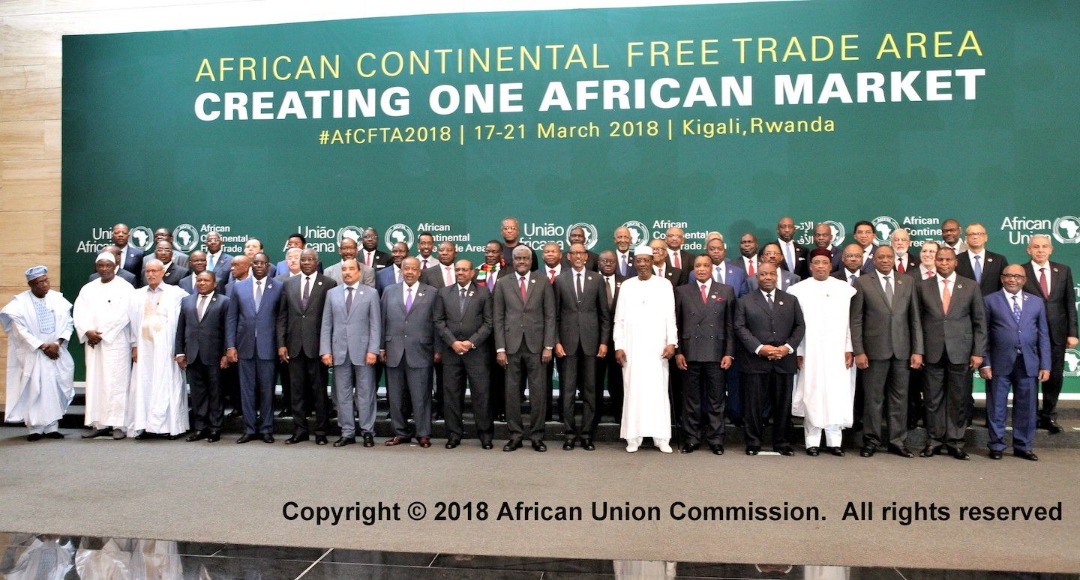 Several African leaders who have been actively involved in the realization of AfCFTA will be recognised today.

Ten African Heads of State will today be awarded for exceptional contribution to the AFCFTA process, the African Development Bank President Akinwumi Adesina has said.

Adesina said the virtual award ceremony, which is open to the public, will recognize African Heads of State and Government for their role in the coming into force of the African Continental Free Trade Area (AfCFTA).

“The award organisers, a number of African private sector organisations in partnership with the African Union Commission, will also honour  two former heads of state, heads of African institutions and other prominent individuals for their ‘exceptional contribution to the AFCFTA process,” Adesina said in a communiqué today.

AfCFTA, the world’s largest free trade area, has the potential to transform the continent with its potential market of 1.2 billion people and combined GDP of around $3 trillion across the 54-member states of the AU.

Trading under AfCFTA officially commenced on 1 January, 2021, and KTPress looks at some of the men and women who could be recognized for their role in seeing this idea initiated three years ago come to pass.

Fruits of these efforts have witnessed out of the 55 AU member states, only Eritrea as the only country yet to join but to date, 34 countries have both signed and deposited their instruments of AfCFTA ratification with the African Union Commission (AUC) Chairperson.

President Paul Kagame of Rwanda, is expected to be recognized for his belief in the agreement in which he started pushing two years ago, with a few other presidents and Think Tank to sell the idea of a continental free trade project where Africans are basically encouraged to open their borders and airspaces to do business with each other as a way of breaking trade barriers on the continent.

Kagame’s efforts as the then Chairperson of AU, saw the AfFCTA agreement deal finally penned in Kigali city in March 2018 and taken up by majority of African countries including Africa’s economic giants South Africa and Nigeria – who are among the latest signatories to the deal after a year of negotiations.

The President of Niger, Issoufou Mahamadou, a stalwart renowned for his staunch support, and as the inspirational driving force behind the AfCFTA could get another recognition following the recent honor he scooped as a Special “Champion of the AfCFTA” at the virtual AfCFTA Business Forum on December 5, 2020.

Mahamadou, the current Chair of ECOWAS, is valued among his West African colleagues for the stellar work he has done in championing the African Continental Free Trade initiative.

No one has done more to ensure the coming into force of the AfCFTA than President Issoufou, and our posterity will reward his name accordingly,” said President Nana Addo Dankwa Akufo-Addo of Ghana, during the Commissioning and Formal Handing Over of the African Continental Free Trade Area Secretariat Building, in Accra, to the African Union Commission in August 2020.

Though he praised other presidents behind this deal, President Nana Addo Dankwa Akufo-Addo could also be recognized for allowing his country’s capital Accra to be the official home of the AfCFTA Secretariat.

Some individual PanAfrican believers who worked to see the One and United Free Africa Trade opportunity come to pass is Carlos Lopes, a professor at the Nelson Mandela School of Public Governance, University of Cape Town and referred as one of the men Championing Africa’s transformation.

Rewarded or not, Prof. Lopez recently tweeted that he had devoted too much of his own energy to this deal to happen and stated that even when more work stands ahead, he was proud of his involvement.

Though Nigeria’s action surprised many, the country could be recognized for being one of the initial drivers of the single African market idea.

Cyril Matamela Ramaphosa, President of the Republic of South Africa, and current Chairperson of the African Union could also be recognized for the benign, progressive guidance and supervision he has offered to make the AfCFTA possible.

Though retired, and ageing out, Former Presidents Kenneth Kaunda of Zambia and Olusegun Obasanjo of Nigeria could also seen in the limelight for playing a backdoor advisory role to current presidents especially on the advise pointing to the importance of the African Continental Free Trade Agreement (AfCFTA) as was the way to achieve initial goals of the Organisation of African Union (OAU) – now African Union- which was founded on 25 May 1963.