Home Society University of Rwanda Stipend Is Peanuts Until You Meet Cyusa, A Good Samaritan
Society

University of Rwanda Stipend Is Peanuts Until You Meet Cyusa, A Good Samaritan

The word “giving back to the community” is sometimes too demanding, but, some people understand that a gift of life is enough for someone to feel indebted.

On a good day of 1992, a son was born in Murundi sector, Karongi district, and his father called him Cyusa Ian Berulo. The son was unfortunate because his mother died while delivering him.

The father, who also would, later on, die during the Genocide entrusted the baby boy to his grandmother, 85-year-old then.

The granny was really old and could not easily afford food for herself and for the fragile baby boy to an extent that they would spend two days with an empty stomach, but God preserved the boy.

In 1998, Cyusa started school in his home village, but guess what, he could not afford school fees, Rwf 100 per term which was required in public Primary School. He managed to maneuver until Primary 4 before he was discovered and dismissed from school.

“I came to the Office of School Principal to request for grace only to be shocked; she dismissed me and said: you being an orphan is none of my business-just pay school fees or else go home,” Cyusa recalls.

Desperately, Cyusa returned home and stayed there for three years.

“It was very unfortunate for me; imagine that I was always the best student since primary 1, though my education was really challenging,” Cyusa recalls.

“I remember that my only scholastic material was a piece of wood where I would write using a piece of chalks.”

After three years, a teacher who learned about Cyusa told him to come back to school so he can pay for him. In fact, the teacher was not paying the fees; the government had started a universal education system where education is free in 12-year basic education, public schools.

After Primary, Cyusa started Ordinary Level, the first three years of Secondary school, day program, and this time, he had to win bread at any cost.

“The school closes at 4 PM, but for me, I had to leave at 2PM to win bread. I was working as a part-time miller at a grinding machine in my village,” he says.

“I would start the machine as I open the notebook to revise my course. The noise of the mechanical machine makes a study environment the worst of all but I had no choice.” 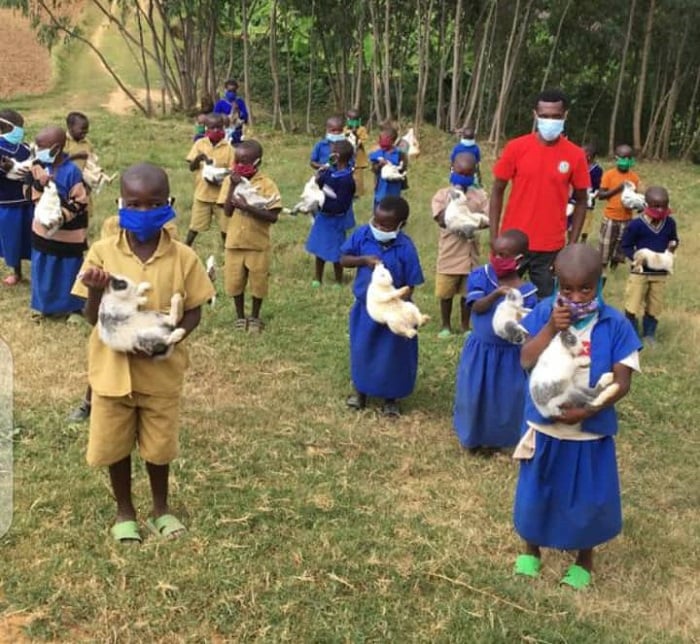 He resorted to the same technics to dodge the bursar until he owed the school nearly Rwf 150,000. Luckily, he would be aware of the Genocide survivors’ fund which recognised him among eligible students, and started paying his school fees.

‘Giving Back’ to the community

From Secondary school, Cyusa won the A level exam and got a university scholarship. One day – we are in 2017, while in holidays, he saw children who reminded him of his darkest past.

“The children were really miserable that my tongue cannot explain. Ever since I started putting aside Rwf 5000 from the Rwf 25,000 monthly stipend to buy them school materials to make sure that they go to school,” Cyusa said.

The initiative would mature to become registered as an organisation- Berulo Foundation now supporting 213 fomer dropout children in Karongi and Rulindo district that were returned to school.

In this charity initiative, Derulo Foundation purchased rabbits and small ruminants and gave them to the children to rear.

The thinking was that a child would for example rear the rabbit, sell its offsprings for scholastic materials, and indeed, it paid off.

One of the beneficiaries, at age of 7 was able to buy a cow from Rwf 130,000 earning from rabbit.

Cyusa hopes that within five years, beneficiaries can have some Rwf 1 million savings onto their account.

Meanwhile, Cyusa is pursuing a Master’s in Peace and Conflict Transformation at the University of Rwanda but his dream for child education is without precedent and his charity challenges whoever thinks that to help, you need to have abundance.

Let the Media Use My Music – Mani Martin