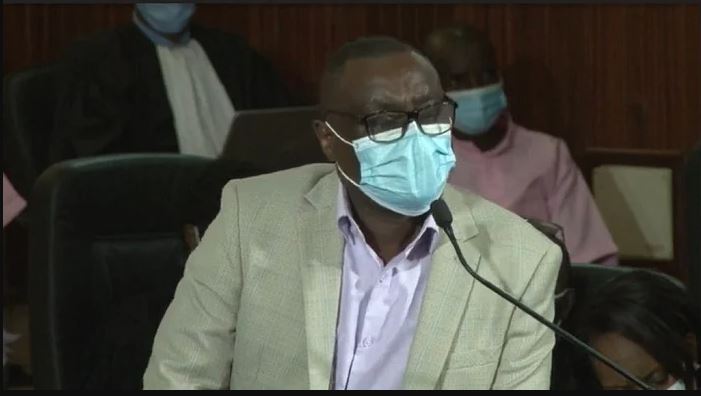 The special chamber of the high court for international and cross border crimes has heard that Paul Rusesabagina and his foundation, Hotel Rwanda Rusesabagina Foundation (HRRF) wired funds with intent to form an armed group.

Rusesabagina has since yesterday dropped out of the ongoing court hearing  of the MRCD/FLN terror trial.

The trial continued with court hearing more witnesses after an American Doctor who spoke about Rusesabagina’s alleged intention to overthrow the Rwanda government yesterday.

Appearing as a key witness before court, Lt. Col. Noel Habiyaremye , a former rebel fighter with the FDLR in DR Congo, told the court that he came to know and communicate with Rusesabagina through friends, some of them in Lusaka Zambia and Brussels Belgium.

Habiyaremye said that he knew Rusesabagina through one Providence Rubingisa, who had a similar idea and political interest in fighting the Rwandan government and through the discourse was told of Rusesabagina and his interests in the same line.

“I asked for his (Rusesabagina) contacts and introduced myself and he told me that he needed support to drive his agenda, of which he had tried to contact FDLR but could not agree on some terms,” Habiyaremye said.

The witness said that he agreed to work with Rusesabagina but lost contact after returning to the jungles in DR Congo, due to lack of communication gadgets but also got sick for a while and had to go to Lusaka.

In Lusaka, he said he was lucky to meet another group of people including Minani and Apollinaire Nsengiyumva who were helpful in reconnecting him with Rusesabagina through satellite calls.

“He remembered me and we spoke of what was happening in the jungle. So he instructed me to mobilize an armed group and I told him we need financial means to meet all armed needs, financial and medical- of which he said that is not a problem,” the witness said.

To ensure the plans kick start, the witness said he asked for funding which Rusesabagina sent to Lusaka through two persons- Meg Umwali and Nsengiyumva close to $1720 and 400euros.

In the discourse, the witness said that he introduced one- Col. Tharcisse Mbiturende who had deserted FDLR and wanted to help after years of trying all possible moves to rejoin rebel groups in the jungles but in vain.

“Mbiturende said he wanted to meet Gen. Adolf the chief of intelligence in Burundi to execute the plan of recruiting more fighters. I shared this info with Rusesabagina and he told me that I need to join Mbiturende to be part of discussion so as to report back to him,” Habiyaremye said.

With guidance of Mbiturende, the witness said that they managed to separately move from Lusaka and Nairobi to Bujumbura using forged documents as Congolese nationals- a move that was also funded by money ($3,000) sent by Rusesabagina through one- Minani.

“In Burundi- we all arrived and went to separate hotels to contact several people- talked to Gen. Adolf asking his assistance with equipment and the need to use Burundi as our base to attack Rwanda. Adolf said it was a good plan and promised to find a way,” Habiyaremye told the court.

After this first major step, the witness said he reported back to Rusesabagina and they agreed that everyone should proceed with the tasks involved.

However the witness said that before moving on, he asked Rusesabagina to solve a very critical problem of communication (using 2 satellite phones) if the job was to be done well.

“We asked Rusesabagina to buy satellite phones (2). He sent me $1870 in two installments- (970 and 900) via Western Union in Bujumbura,” Habiyaremye said.

“I cashed the money with a plan to buy the phone and go to the field, but it didn’t happen because we were arrested; all documents and money confiscated – and later were transferred to Rwanda via Akanyaru border post,” he narrated.

Habiyaremye concluded saying that this is how his story with Rusesabagina ended (in 2009). “That is my testimony and experience. I served three (3) and half years in prison and my life has gone back to normal. Thank you.”

Prosecution and lawyers defending victims in terror attacks alleged to have been manned by Rusesagabina’s MRCD-FLN armed group in Southern and Northern Rwanda between 2018-19 said that this is evidence the accused were using their charity and political organs to fund terror acts.

Lawyer Marie Louise Mukashema defending victims stressed on how terror can hide behind charity as in the case of Victoire Ingabire and Rubingisha, which is (or could be) the same understanding of the communication in the Rusesabagina and the key witness- Habiyaremye considering movements on email and sending of funds (as seen in a previous hearing yesterday- on the Rusesabagina’s foundation-HRRF).

The court asked prosecution to clearly show the connection of Rusesabagina in the formation of charity groups for the purpose of funding terror activities.

The prosecution showed that it was evident in emails sent between Rubingisa and Fernando Ngamije in which the former asked for finding a way of forming a charity organization to channel terror funds.

“We see areas where Paul Rusesabagina agrees to purchase some weapons at ease in Europe after Ngamjie is asked to make a list of needs and submitted them to Rubingisa,” the prosecution said.

Prosecutor Claudine Dushimimana said there is a link in both hearings from yesterday and today, which shows deep roots of the formation of terror groups dates pre-2018 attacks headed and overseen by one group that broke away from many others in DR Congo.

“So the witness today confirms that Rusesabagina had plans to form an armed group through his foundation and political party-MRCD-FLN,” she further said.