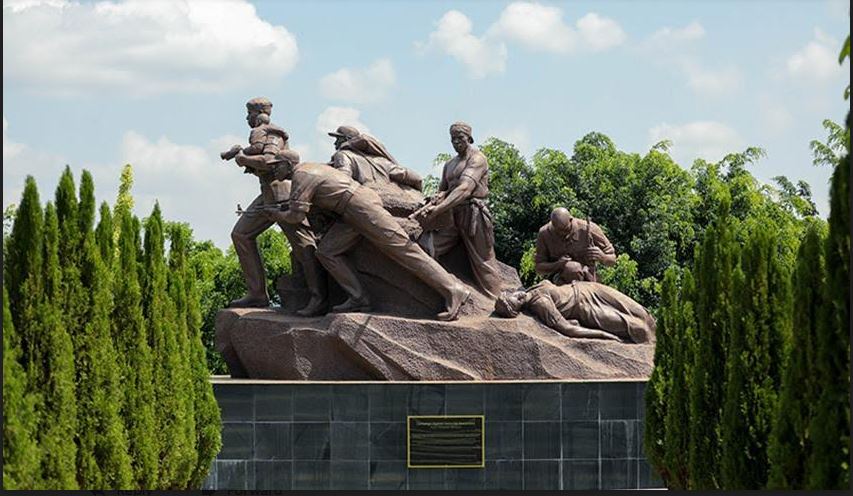 A life of nomadism and despair, daughters and sons denied their motherland, a country disallowing free movement, a land where the discriminated genius was denied access to school, life was unpredictable in the divisive reign post Rwanda’s independence and hell found ground in 1994 when the genocide against the Tutsi soared.

Rwanda marks the Liberation Day for the 27th time. This day reminds us of the landmark victory of freedom fighters motivated by unconditional love for their homeland and her people’s emancipation, a force of brave young men and women led by H.E Paul Kagame that on 4 July 1994 stopped the genocide against the Tutsi and embarked on the daunting task of rebuilding a shattered nation.

Looking back, the liberation we celebrate lifted Rwanda from an infernal era to a dignifying fresh breath of life.  It embodies more than a celebration, the immensity of its epitome and outcome resonate deep in our hearts, inspire our present and future!

Decades of bad politics and horrors of the genocide against the Tutsi blighted the socioeconomic and political fabric of the country and left a failed state hanging in doubts of the ability to rise and stand.

Everything rises and falls on leadership. Despite the near insurmountable challenges, thanks to the visionary leadership under President Paul Kagame, Rwanda has risen from the ashes with a remarkable turnaround built on wise strategic choices of unity, accountability and thinking big in delivering people centered development.

“Every pit has a bottom. Rwanda reached the bottom of the pit with nowhere else to go but up. Today, we have emerged from this pit and we are above it. Rising above the pit we had fallen into requires working hard. Moving up is a permanent effort.” President Paul Kagame told over 300 opinion leaders from across the country at Nyakinama on 11th June 2021.

In addressing the plight of a society gripped by trauma, the Government of National Unity was steadfast in instituting and implementing policies that nurtured justice, unity and reconciliation. Not the winner takes it all!  In the aftermath of the 1994 genocide against the Tutsi, over 20,000 officers and personnel of the former army were integrated in national armed forces and over 3.5 million refugees were repatriated, resettled and reintegrated successfully, the 2016 National Unity and Reconciliation Commission report on unity and reconciliation process highlights.

Restorative and reconciliatory justice has worked! Genocide related cases that would take a century in courts, were investigated and tried in a single decade. Homegrown traditional Gacaca courts were reinstated and tried almost two million cases in only ten years, according to the 2012 National Service for Gacaca Courts.

As we mark the Liberation Day, it is a good time to reflect on the essence of Rwanda’s liberation struggle of the 1990’s and the restoration of fundamental rights that we enjoy today. In this piece, I share seven key reflections.

First, Rwanda was liberated from hate and all forms of divisionism that had gripped the country from the colonial time through to first and second Republics. With Liberation, a new page of true freedom and equal opportunities unfolded. Ethnic group based identity cards, vehicle number plates based on areas of origin, movement permits and all other discriminatory policies became a thing of the past. The country was fully set free and is now united and at peace!

Second, Rwanda was liberated from insecurity and state of fear which were evil routines perpetrated by the would be security providers. Today Rwanda Defence Force is the darling of the citizenry. Rwanda is safe and secure and Rwandans no longer need special permits to move around within their own country. Rwanda ranks the safest country in Africa and 5th safest country to walk at night worldwide.

Fourth, Rwanda was liberated from the chains of gender inequality. Women today enjoy inheritance rights which never existed before. Rwanda became a global leader in women participation in legislative decision-making positions with 61.3% female members of Parliament.

Fifth, Rwanda was liberated from rampant ignorance and discriminatory quota based education. A free universal 12-year basic education is offered to all children without any discrimination. Today the country has over 40 tertiary institutions accommodating over 86,000 students from a single university back in 1994 graduating less than 2000 students annually.

Sixth, the country was liberated from high infant and maternal mortality rates arising from poor healthcare. More than 90% of Rwandans are currently covered with universal health insurance. Health facilities are more accessible including the use of technology such as drones that deliver life-saving blood and other materials to remote health facilities.  Life expectancy almost tripled from 27 years in 1994 according to the World Bank to 67.8 years in 2020.

Seventh, Rwanda’s Liberation brought self-determination and is on the right path to a dignified life. With education and healthcare for all, descent shelter where Rwandans bid farewell to Nyakatsi (grass thatched house) to modern IDP Model villages, there is a sense of dignity in the air. Rwanda is no longer a country known for all bad things including the genocide against the Tutsi but a clean, green, least corrupt and a safe country for everyone, top UN peacekeepers contributing country, easiest place to business in Africa, a liberal open economy and an emerging hub for IT, MICE and  financial services.

The economy    has grown remarkably with the GDP rising 14 fold between 1994 and 2019 while the GDP per capita increased seven fold over the same period.

In the words of Sheikh Mohammed bin Rashid Al Maktoum, the Vice President and Prime Minister of the UAE and Ruler of Dubai “the race for excellence has no finish line.”

In deed Rwanda has achieved a lot yet we are reminded that the biggest room in the house is that of improvement as President Paul Kagame underscored at the 25th Liberation Day: “The logic of liberation is to turn bad things into good things. What Rwandans have achieved is undeniably real. But we must stay humble enough to know that our main challenge is sustainability.”  A lot remains to be done as well captured in our vision 2050.

Young and brave liberation struggle fighters who gave their all for the Rwanda we enjoy today inspire us to serve our country without reservation. Our youth today are called upon to embrace the values of sacrifice, integrity, courage and determination to carry on the legacy of the liberation struggle.

The author is H.E. Emmanuel Hategeka, Ambassador of the Republic of Rwanda to the United Arab Emirates