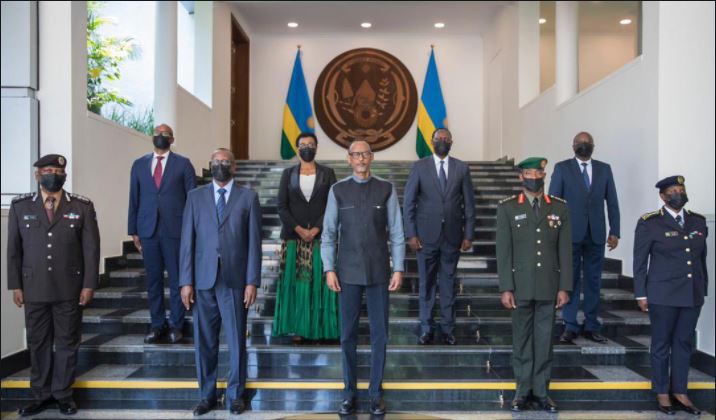 Today, President Pual Kagame presided over the swearing in ceremony for the newly appointed Minister of National Unity and Civic Engagement, Jean Damascene Bizimana and other four senior government officials.

The new government officials took oath at Village Urugwiro on Monday, having been appointed to their positions at different times.

The Head of State told the newly sworn-in leaders that they are expected to use their experience to deliver in their new positions having previously served in other positions before their most recent appointments. He reminded them to put the country first in whatever they do.

“Nation building is every Rwandan’s responsibility because this country belongs to all of us. We already have a solid foundation that we must now build on to achieve even more. This is where our country gets its strength,”

“These responsibilities are not new to us. We have experienced a lot to help us not repeat our past mistakes. Instead, we need to devise new, innovative ways that are adept to the times we are in and deliver on our promises.,” Kagame said.

The Head of State added that the weight for all of that should be understandable to all, urging them to use their experience to serve even better in their new capacities.

Other government officials who were sworn-in today are Lt. Gen. Mubarakh Muganga, the Army Chief of Staff and Col Jean Paul Nyirubutama, the Deputy Head of National Intelligence and Security Services (NISS).

CGP. Juvenal Marizamunda was sworn-in as a Chief of Prisons while DCG. Chantal Ujeneza was sworn in as Deputy Inspector General of Police in charge of administration and personnel.

“It is understandable, no one can work alone. Every day, it needs working together, that’s when it becomes easy for us to meet our targets. Rwandans have achieved a lot through working with leaders who fulfill their responsibilities well,” the Head of State noted.