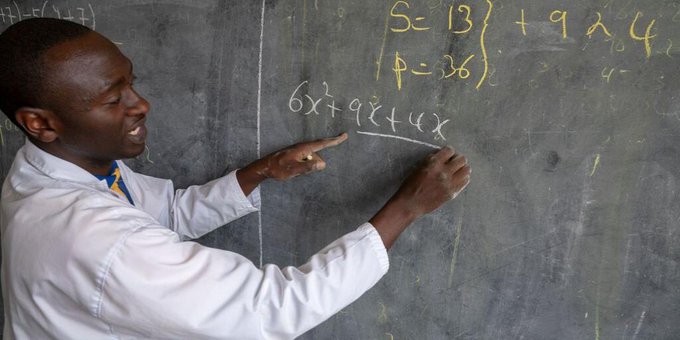 Rwanda has established scholarships that will facilitate primary and secondary school teachers to pursue further studies, after serving a particular period of time.

In this arrangement, primary teachers who graduated from Teacher Training Colleges (TTCs) will teach for three years to qualify for the scholarship for Bachelor’s degree at University of Rwanda (UR)’s college of education.

For secondary school teachers who graduated with bachelor’s degrees from various universities, they will have to teach for five years to get a scholarship offer at Master’s level, according to announcement that was made in July by Prime Minister Edouard Ngirente.

“Those who will graduate at TTCs and teach in primary schools for three years will now get a full scholarship and upkeep if they pursue education at university level,” Ngirente said in July this year.

“Also, those who will complete a bachelor’s degree in education and teach for five years in secondary school, will also get a non-refundable master’s degree scholarship and stipends,” he added.

The Prime Minister made the observation while addressing the parliament about achievements and promotion of Technical and Vocational Education and Training (TVET) and Polytechnics in the country.

Students from advanced level who want to pursue Education will get 50% scholarship subsidy.

Under the new arrangement, the government waived repayment of student loans.

With more university graduates shying away from joining teaching profession because it is one of the least paying jobs, the government expects the scholarship to change the narrative.

According to the Ministry of Education, those who complete O’Level and spend three years studying from TTCs and eventually teach in primary schools will be given priority when it comes to scholarships.

Fred Kagina, Head teacher of Kambyeyi Primary and Secondary school located in Kamonyi district, Southern Province said that the average amount a student can spend at the University to study education courses is Rwf500,000 annually.

“I have been in the education sector for 10 years, but this is the best offer. Teachers will have a different status and Image than what people knew. However, the government will need to offer scholarships to many teachers annually to immediately get a quality education,” Kagina said.

“It is obvious, the more teachers advance their education, the more knowledge and skills,” he added.

According to the Ministry of Education, in 2011, there were a total of 37,038 public primary teachers and secondary school’s teachers 16,593.

Today, that number of teachers has increased to 47,438 for primary and 26,177 for secondary schools.

“It is motivational, teachers will serve with good attitude,” Boy Mugisha, a teacher at GS Nyarugenge said.

Promoting teacher’s welfare has been the government’s priority for the previous years including their salaries by 10%. A primary teacher takes home Rwf46, 400 from RwfRwf42, 000 and a secondary teacher is paid Rwf137, 000 from Rwf12,500, monthly salary.

Other solutions expected to raise the education quality include the government’s relentless efforts to construct over 1150 new classrooms worth Rwf10.4Billion with the target to reduce the distance to 2 kilometers for secondary school and 1 kilometer for primary students.

Similarly, the government has also been fighting to reduce the student-teacher ratio that reportedly stands at 59:1 in Primary and 29:1 in Secondary or 46:1 on average in both levels.

Starting with December 2020, there has been mass recruitment of teachers targeting to reduce the student-teacher ratios to at least 40:1 with the government aiming at hiring about 29,000 teachers.