Two Children Buried Under Landslide, Finding Bodies Is the Only Remaining Hope 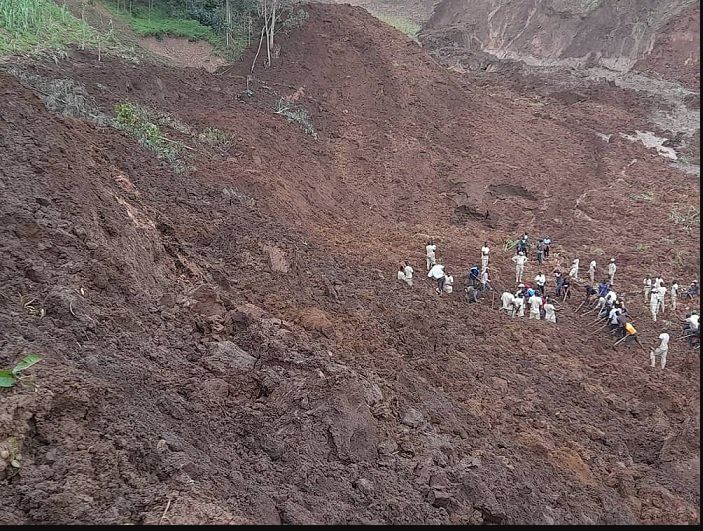 On Thursday, April 28, citizen of Huye village of Nyundo sector in Rubavu district woke up to bad news.

Two children of their neighbours were swallowed by landslide and they failed to retrieve their bodies because the place is still not safe for the search to proceed.

The children, namely Bigengimana Cyprien 8, and Uwiduhaye Clementine 5, who happen to be cousins went to the stream in early birds to fetch water.

By 8AM, they were still buying time, playing without any worry because their class was in the afternoon.

They were feeling that it was the right time to enjoy some games under fresh air, even though parents might have had other chores to give them for that morning.

Ndarivukanye Valentin, the father of Bigengimana recalls that in the previous night, his son who is among seven children was reprimanded for not taking birth every day while he plays a lot and get dirty.

“With this in mind, the child woke up early morning to fetch water so as to defy the odds,” the father said.

Ndarivukanye only woke up to see the landslide has taken the son and left him with no hope to see him anymore.

As for Rwamakambiza Pasteur the father of Uwiduhaye, he had left home at 5AM for his job of construction in Rubavu town. But, an early call when he had barely started his work worried him.

He was told that his beloved daughter was lost in landslide. He returned home upset.

The father recalls that the previous night, he was witness of great love of her child.

“She told me: dad, you are tired, I want to clean your feet. She brought hot water and started cleaning me. I was amazed,” Rwamukambiza said.

Uwiduhaye, last born in a family of four left a big vacuum in the family.

“I expected her to grow up, get married and become mother of many,” said the father.

On Friday, April 29, Rubavu District had used a special community work-Umuganda to try and retrieve the bodies, in vain.

“We probably could find them, but we were advised to hold on so as to avoid any further fatality because the landslide has not ceased,” said Aaron Habimana, Executive Secretary of Nyundo sector.

Rubavu district advised, that the citizen will have to vacate the place to avoid further fatality. The neighbors said, that they will need support to settle in other areas because they cannot afford the cost of constructing a house.

The Rwanda Meteorology Agency estimates that Cumulative rainfall ranging between 100 and 120 mm is the highest in this dekad(ten days) and is expected over most parts of Rubavu, Rutsiro, Nyabihu, Musanze, Burera and northern parts of Gakenke and Rulindo Districts.

The expected rainfall will be above the range of Long-Term Mean (LTM) over Northern and Western
Provinces and will be in the range of LTM in the remaining parts of the country (The range of LTM
varies between 30 and 70mm).

Impacts associated with heavy rain, thunderstorms and winds such as flooding on road surfaces, localized agricultural areas, flood-prone areas, slippery roads and poor visibility during rainstorms may lead to poor movement of vehicles, landslides in areas of high slopes, roof tops blowing off, falling of leaves and small branches, and damages caused by lightning and thunders are likely to occur, according to Rwanda Meteo.

All this might complicate search of the bodies of the two young souls.

INSEAD: Business School for the World Campus May be Heading to Rwanda.