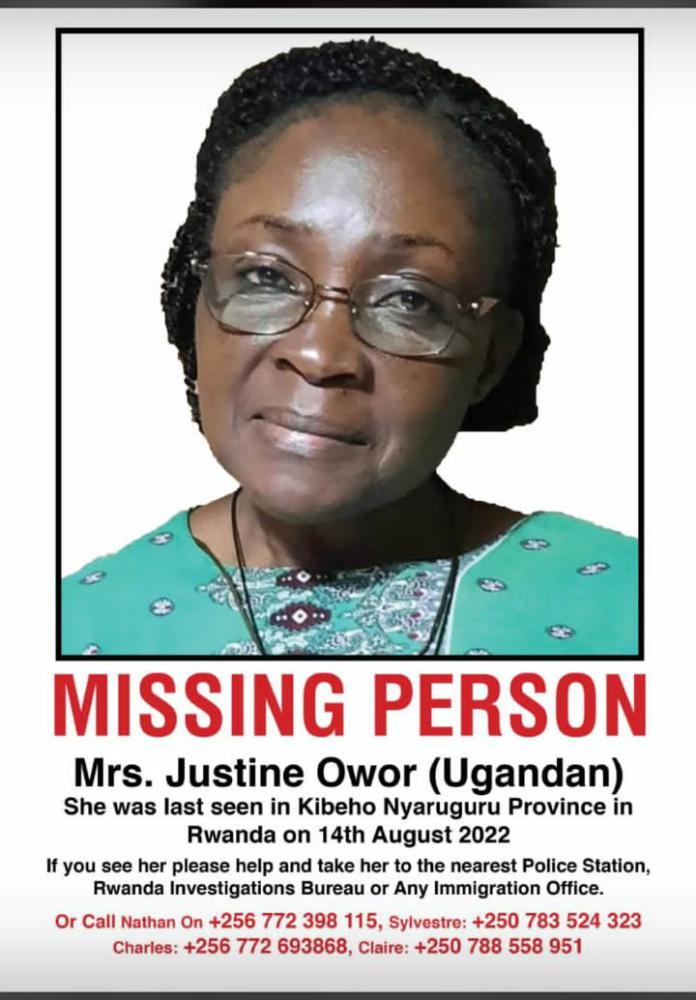 Owor, 59, was found in Kigali after going missing for days.

Rwanda National Police (RNP) says a Ugandan woman who had travelled to Rwanda on a pilgrimage to Kibeho but was reported missing for days was found in the capital Kigali. Justine Owor, 59, was reported missing on August 16 after the delegation she came with to the holy site located in Nyaruguru district, Southern Province, could not trace her.

Police on Monday said Owor was found in Kigali and she is safe but suspected to have a mental health condition.

“Rwanda National Police (RNP) wishes to inform the general public that Ms. Justine Owor, a Ugandan citizen, who was reported missing on 16 August, 2022, during a catholic Pilgrimage at Kibeho,Nyaruguru District, has been found and Is safe,”

“Ms. Owor was found wandering on the streets of Kigali. Medical doctors came to the scene and observed that she was experiencing mental distress. She is currently receiving healthcare at the National Neuro-Psychiatric Hospital, CARAES Ndera.

RNP added that Rwanda’s Ministry of Foreign Affairs and International Cooperation, and the Directorate­ General of Immigration and Emigration are informed and will facilitate Ms. Owor to reunite with her family.

The announcement followed days of frantic searching of Owor who went missing from Kibeho, which is approximately 154Km from Kigali. According to reports, Owor entered the country through the Gatuna border on August 14 enroute to Kibeho to join thousands of Catholic Congregants on August 15, 2022 to mark Assumption Day at Kibeho, a site renowned for the 1981 apparition of the Virgin Mary.

In 2001, Pope Paul II, the Roman Catholic Church at the time , officially declared Kibeho a Holy Land following the apparitions. Every year, Catholic faithful from the region and beyond flock to the site to pray and celebrate the holy event.

Owor was part of a group of 23 Ugandan nationals who returned home on August 16 without her. It was suspected that Owor disappeared in the crowd, which was said to be close to 10, 000. It was also reported that her phone had remained in her bag, which was in the bus they used to travel, which made it difficult.

Her delegation got worried when they didn’t find her at the accommodation facility they had booked, which prompted them to report to police before heading back to Uganda. The High Commissions of the two countries worked together with law enforcement organs to trace the whereabouts of Owor. It is not clear how the retired businesswoman ended up in Kigali.