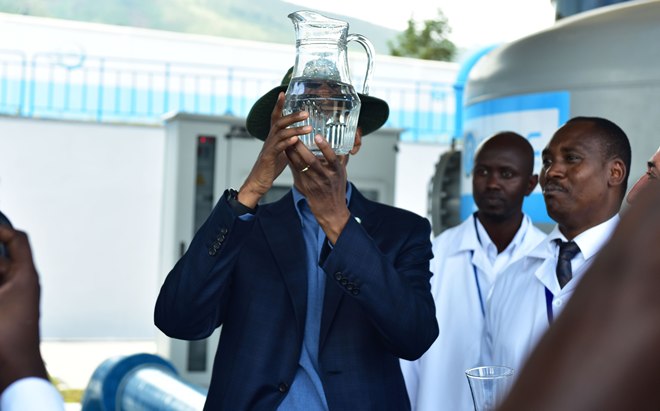 Rwanda’s Capital City, Kigali will have 100% access to clean water by January 2017, according to Infrastructure Minister James Musoni.

Minister Musoni made the revelation earlier in the day shortly before President Paul Kagame inaugurated a 25,000m3 water plant built by  an American firm, Culligan International.

Ideally, every city dweller should consume 100 litres per day, but Kigali residents are still relying on 40 liters’.

Water and Sanitation Corporation (WASAC), a government utility, has promised that by December 2016 there will be no more water shortage for good.

Culligan will also build forwarding infrastructure to transport water from the treatment plant to Mount Kigali into water reservoirs linked to the existing networks in Kigali.

All the phases in this Nzove project-including the one commissioned today, will cost $28 million (about Rwf21.5 billion)  and will bring total water coverage to 120,000m3, which will allow Kigali get the required water ratio within eight months.

While commissioning the $7.4 million plant today, President Kagame commended Culligan for “great job” done and said that the firm has displayed ability to solve a daunting problem.

Apparently the African Union has given Kagame a responsibility to mobilize access to water to masses on the African continent.

“You can be sure, Culligan will always be at the back of our mind to give as an example that can actually provide the water we need in term of processing and doing that cost effectively.”

Minister Musoni said Rwanda got a better deal because the firm can deliver water with cost effective technology at an average $296 per cubic meter compared to $750-1000 per cubic meter elsewhere.

Meanwhile, Culligan’s President, Laurence Bower, told President Kagame that the firm has decided, after carefully studying Rwanda, to set up their East and Central Africa regional headquarters in Kigali.

“I am proud to inform you that the Culligan Board of Directors who met last three weeks in Chicago has authorized creation of our regional headquarters in Kigali for East and Central Africa,” Bower said adding that, “Rwanda is among the most important countries for our investment.”

The headquarter, which will be set up this year, consists of offices, a regional service center and manufacturing facilities.

President Kagame told Bower that, “We will make sure that you will be happy with a decision you have made through the quality of partnership we are going to forge.”

“You will continue to do the good work here, and through the region,” he said

Meanwhile, Nzove 2 project has won an award for being best project for drinking water, among the Culligan network of 95 countries.

Culligan technology will help the country save close to $1 million annually in water infrastructure expenses, according to Minister Musoni.

The new water infrastructure is a relief to Kigali residents.

“We used to walk two kilometers to fetch water. Our children dropped out of school because of water shortages, but we are now relieved,” said Emerence Mukamunana, a resident of Nyakabanda neighborhood who are now accessing the water.