All the 106 members of parliament will spend an entire week trip-trotting around the country. Their mission is precise. Deleivering a message they hope will woo over five million voters to back the new amended constitution.

The lawmakers have divided up the country – with various teams heading to each of the 30 districts.

Officially, the lawmakers from the Senate and Lower House are going back to their consitituencies to report about a task they were given back in July during the ‘consultative meetings’ – following 3.8 million petitions asking the MPs to amend article 101 of the 2003 constitution.

The article set two 7 year terms for a head of state, but the petitioners, some of whom often arrived at parliament in elaborate fanfare, wanted the lawmakers to abolish the measure. Their only reason was; Paul Kagame had to remain leader of Rwanda past the 2017 end of his last term.

But during the ‘consultations’, views separate from term limits emerged – prompting lawmakers to go for a complete overhaul of the constitution. More than 150 articles were amended – including a controversial scrapping of reference to God in the preamble.

MPs returned to the House, and within a period of a month, the entire amendment process was completed.

Last week, cabinet set December 17-18 for the referendum for the voters to accept or reject the constitutional changes.

More than 33,000 Rwandans in the diapora will also be voting.

The new document has quite historic changes. The whole constitution will alternate translations into Kinyarwanda, English and French – all now considered “official languages”.  The whole rule-book will have 177 articles – down from 203 in the previous constitution.

Article 101 maintained the principle of limited presidential terms but amended from 7 to 5 years. Article 172 stipulates that the provisions of article 101 will begin to be implemented after a 7 year term starting from the year 2017.

“This was done in respect to people’s request to safeguard progress made and building a strong foundation change in stability,” says lower chamber speaker Donatile Mukabalisa, in reference to voter preference for incumbent Paul Kagame. 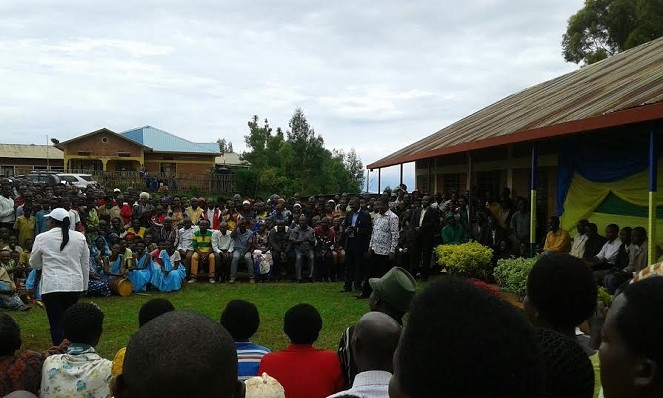 During the national consultations, the dominant view was that article 101 be amended for ONLY president Kagame, and once he was no longer leader, it be reinstated. But in the House debates, MPs said they wanted Rwanda to come into harmony with its regional neighbours which have 5 year term limits.

In the revised Constitution, the term of service for Senators will be moved from an 8-year non-renewable term to a 5-year term renewable once. However, the Senators in office at the time of commencement of this revised constitution shall continue the term of office for which they have been elected or appointed – which is up to 2018.

Beginning this Friday up to Wednesday next week, all the lawmakers are in different districts. In the 80-member lower chamber, there are more than five parties – with all but two parties in coalition with the dominant Rwanda Patriotic Front (RPF) of President Kagame.

“We told our members to approve the amendments by voting YES,” said Veneranda Nyirahirwa, the vice president of PSD.

“We are an opposition party, but our country chose consensual democracy instead of having political parties which shed blood while fighting for power.”

PL also issued a communiqué for the YES vote. It read: “Liberal Party commends the work of the parliament which amended the constitution considering the citizen plea. We take this opportunity to request all the party members and the general population to vote YES in the referendum.”

Amid the massive YES platform, two virulent opposition parties were last week laughing at their colleagues for what one of them described as rushing through a referendum without giving time to the citizens to understand what they will be voting for.

“A constitution cannot be reviewed in a month or two; the general public should have many sessions to understand the new constitution even after referendum,” said Christine Mukabunani, leader of Socialist Party Imberakuri (PS Imberakuri). But she was quick to add that her party will vote YES.

The only party which is promoting a NO vote to the referendum is Democratic Green Party of Rwanda. “We are asking all Rwandans to vote No to the amendment,” said Jean Claude Ntezima, the Secretary General. Problem though, even as the YES team gets to all villages, the NO campaign has not been to any.