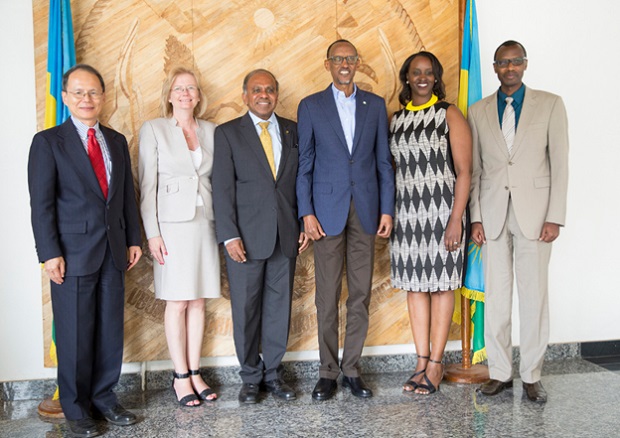 Rwanda’s engineering courses have become more competitive and this could boost the country’s education sector.

Students from 13 African countries have already applied for Master of Science and Technology course at Carnegie Mellon university in Rwanda.

“We have students who graduated in different fields in Science and Technology contributing to the country’s development. Some have established their own companies while others are helping us bridge the gap of lecturers in the field at our Universities,” he said.

On Monday, the University signed a $10.8 million deal with Canada-based Master Card Foundation, in which 125 students from mostly disadvantaged African students can benefit from world-class engineering courses at the Kigali campus in the next 7 years. 40% of the students will be from Rwanda.

This afternoon, Subra Suresh, the ninth and current president of Carnegie Mellon University, held talks with President Paul Kagame on how better the institution can serve Africa.

With its Center of Excellence in Information and Communication Technology (ICT) based in Rwanda, Subra Suresh told KT Press that his discussions with the President Kagame centred on what is needed to further extend the University services to another level.

“We were impressed by progress of Carnegie Mellon program in Rwanda in the past years. We look forward to strengthening our collaborations.”

Being one of the few global technology research institutes opening shop in Sub-Saharan Africa, Suresh said that his meeting with President Kagame discussed how the model can be transformed to yield tangible results.

“CMU is one of the very few major research Universities in the World to offer engineering programs at masters level in Sub-Saharan Africa. We discussed how to expand the model and demonstrate to the world how this is working and benefitting Rwanda.”

Despite having invested heavily in Science and technology, Rwanda still faces a challenge of engineers to run multiple infrastructure projects underway across the country-especially in construction sector.

Recently, Kigali City inked a deal with Kobe city in Japan, to start recruiting over 1000 ICT engineers from Rwanda to help the country cut down unemployment challenges.

Carnegie Mellon University’s master’s degree program tuition in the College of Engineering is $42,000.

However, through financial partnership with Rwanda government, the cost has been cut down to $16,000 for students at Rwanda campus, with an additional scholarship of $8,000 to students from East African Community member countries.

In 2012, US-based Carnegie Mellon University- a world leader in engineering education and research, opened a campus in Rwanda’s capital Kigali, as part of extending its reach to Africa.