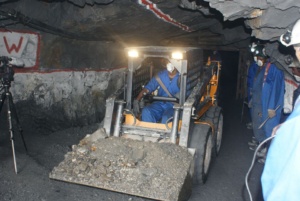 A grader underneath a mining site

By next year, a dream that Rwanda would have its automobile and mobile phone brands that will compete with famous brands from across the world will no longer be too ambitious.

East Africa Mineral Processing Ltd, a subsidiary of Canadian based AB Minerals Corporation has announced plan to build a coltan (Columbite-Tantalite) processing plant in Rwanda, the first of its kind in Africa next year.

EAMP said in a statement, that the plant will eliminate almost all elements from the raw ore, to remain with K-salt and Niobium Hydroxide that will be upgraded to metallurgical grade Tantalum powder for export.

The plant has a-1,080 tons production capacity annually-90tons monthly.

The company has finished design of the plant which will use, “new, disruptive processing technology that is more environmentally friendly, low cost and energy efficient, to produce metallurgical grade Tantalum powder and Niobium oxide.”

The two products are on high demand on the market with tantalum being used in modern electronics like portable telephones, personal computers, automotive electronics, jet engine components, nuclear reactors to mention but a few.

According to reports, Rwanda is currently world number one exporter of Coltan supplying 50% and this triggered the interest of the company to Rwanda, on top of the confidence to make good profit, and good business environment the country offers.

“Unlike mining operations, profit margins for processing stay reasonably constant regardless of rising or declining commodity prices,” reads a statement from the company.

Moreover, companies in North America, “have expressed their interest to sign offtake agreement to buy the finished products from Rwanda.”

Construction of the plant will start after a $1 million production run conducted at a major laboratory in the United States. The plant itself will take approximately eight months to construct.

Frank Balestra the CEO at AB Minerals Corporation said “The reason most African mineral resources are exported as raw material is due to a low level of industrialization in the local sector.”

“Bringing Coltan processing directly to the region will bring industrialization to the country and the mining industry in Rwanda and East Africa.”

He said the implementation will also create interest in bringing new projects and international investments into Rwanda.

“It will not only create value-added products for export, it will bring significant benefits to the people of Rwanda and those connected to the development of the Coltan industry.”

Meanwhile, Rwanda Development Board(RDB) and the Ministry of Natural Resources(Minirena) have endorsed the project.

“We expect to meet the investor in November for further discussions about the project. We are in contact,” said Lieutenant Colonel Emmanuel Munyangabe,Head of Geology and Mining Department at Minirena.

Despite challenges of fluctuation which also affects extraction efforts, the mining sector remains one of the top of Rwanda’s exports. In 2015, the sector’s export generated $117.81 million from 7280 tons and $203.2 million worth of exports in 2014. The earning is expected to increase to $500 million by 2018. By the same period of time and will have created over 600,000 jobs.

The new investor hopes that his venture is a good opportunity to the miners who are predominantly artisanal and small scale mining companies and cooperatives.

He said they will get an encouraging price.

“Miners will be able to receive higher prices for their ore by selling directly to a local smelter rather than to agents,” said Balestra who avoided a question on the cost of their investment.

Has the plant started working? If yes, at what design capacity is it working? My company intends to open a new similar production plant in Nigeria and I am looking for a tested partner to work with. I will be happy to visit the plant if your answers are ok. Kindly let me have the details of the contact of the plant operators

Thanks so much for the information. Now Africa can progressively participate in the development of the continent. A million miles start with the first step. Kudos for the Kigali government, the owners and the people of Rwanda.