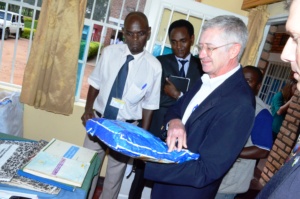 The commitment was made this week through the United States President’s Malaria Initiative (PMI): Rwanda -Malaria Operational Plan for 2017.

The funds are destined to support early diagnosis and treatment of Malaria in pregnancy (MIP), while covering the cost of the current cure of malaria, the artemisinin-based combination therapies (ACTs).

They will also help to acquire about 1 million insecticide-treated nets (ITN) for pregnant women in high transmission districts, in line with country program to distribute 6.2 million mosquito bed nets by December this year.

Another activity that is set to benefit from PMI is the Indoor Residual Spraying (IRS) for approximately 576,000 structures in high-burden districts.

Dr. Aimable Mbituyumuremyi from Rwanda Biomedical Center (RBC) told KT Press that the government plan is to cover all high risk malaria Districts but the implementation was hindered by lack of sufficient fund.

Already, the country managed to spray in Kirehe and Nyagatare Districts of eastern province in September and the program will be extended to Bugesera and Gisagara Districts in November.

“We would like to cover more Districts but there is limitation of funds and we have to work within the limits. We are now advocating for more IRS insecticide budget allocation from the PMI next funding,” Mbituyumuremyi said.

The increase has been attributed to, among others, the low quality mosquito nets. The country procured three million substandard mosquito bed nets which cost more than $15million in 2013.

Total PMI fund to Rwanda from 2006 to date amounts to $ 181.2 million. the amount committed has been increasing every year.

When you Go for Umuganda and Return Home with Cows