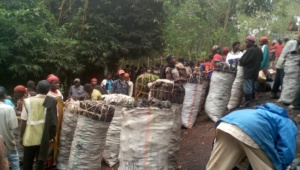 Charcoal traders in a local market

Rwanda badly needs an investor who is capable of replacing firewood-the traditional cooking energy which is putting the country forests under pressure.

Officials in Ministry of Infrastructure indicate that the country still faces high dependence on biomass, accounting for 85 per cent of the total energy.

Last year, energy sector strategic plan 2013/2014-2017-2018 by Rwanda’s Ministry of Infrastructure found that demand for conventional firewood and charcoal was 4.2 million tonnes annually, resulting in a deficit of 870,000 tonnes per year.

“While less than expected due to government plantation programs, it still represents a -21% deficit in relation to current demand,” reads in part the strategic plan.

“Rwanda as other partner states, we still have dependence on biomass in big percentages,” said Robert Nyamvumba, Director General at Ministry of infrastructure during the 3rd iPAD Energy Infrastructure Forum in Kigali on Tuesday.

The two day meeting is providing a platform for project developers, finance houses and multilateral investors, construction and planning companies as well as technology providers from Rwanda, the region and from the rest of the world.

Nyamvumba said, the country needs investors that are ready to bring alternative energy to the fuel wood.

As alternative to the firewood, he said the country is interested in projects that introduce gas and biogas in the Rwandan community.

“This will help us move from charcoal that we are using today causing our population’s health problems to clean cooking technologies,” said Nyamvumba.

“We need investors to tap into this opportunity.  Some foreign companies are already willing to invest in this component.”

The biomass is used in form of firewood, charcoal and agricultural residues which is mainly used in cooking both in rural and urban populations as well as some industries.

Nyamvumba said the government is planning to reduce the biomass dependence to 50 percent by 2020 and 30 percent by 2030 through Public Private Partnership.

The Minister of Infrastructure James Musoni said that Rwanda is committed to streamline power sector procedures intended to help private sector investment to tap into the opportunities.

“It is important to note that energy has played a key role in achieving GDP growth rate of average 8 percent over the last five years,” said Musoni.

“Of course this has been short of set target of 11 percent in our medium term development strategy that ends in 2018. This implies that consideration investment in energy generation and distribution is required to meet the targets.”

Under the Electricity for All Agenda that was launched on Tuesday, the government is also looking at reducing energy losses mainly in infrastructure along the transmission lines, increasing efficiency through usage of energy saving products.

Currently, the country’s grid losses stand 22 percent the government planning to reduce the losses to 15 percent by 2020.

The government plans to increase electricity roll-out to 70 percent in 2018 from the current 27 percent. Energy production is expected to grow to 563 MW in 2018 from 190 MW this year.